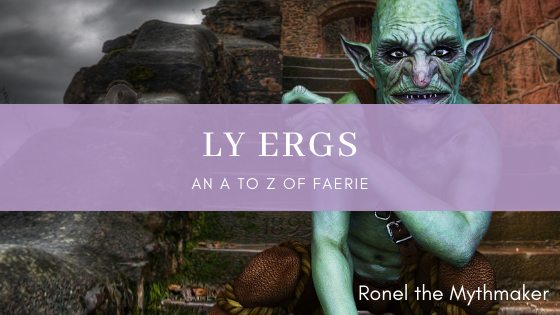 L is for Ly Erg

The misty glens of Scotland is home to many fae, none quite as terrifying as the Ly Erg.

There is much talking of a spirit, called Ly Erg, that frequents The Glenmore. He appears with a red hand, in the habit of a souldier, and challenges men to fight with him; as lately in the year sixty-nine he fought with three brothers, one after another, who immediately dyed thereafter.

A Witch’s Guide to Faery Folk by Edain McCoy

Other Origins: none known, though he shares some in common with the Beanshidhe, the Erlkonig and the Fylgiar.

Other names: none known.

Appearance and temperament: There is only one Ly Erg. He dresses like a soldier and can only be distinguished from a real one by his small size and his red right hand.

Lore: The Ly Erg is seen as a portent of death, but unlike so many such portents, this is one with whom you have a second chance at life. It is reported that the will stop his mark on a road or path (especially if it is near water) and challenge you with a raising of his red right hand. The best thing to do in this instance is to retreat, because if you allow him to engage you in combat you will die within a fortnight. His red hand is said to be the result of many years of bloodstains from those he has killed in combat.

In Scottish lore, particularly in the Glenmore area, the Ly Erg is a singular, individual fairy longing to be a soldier. Dressing as such, it cannot be distinguished from actual soldiers except for the fact he has a blood stained right hand. While walking down the road Ly Erg will stop on the road near water and by raising his red, right hand will challenge you to combat. Win or lose anyone who engages Ly Erg dies within a fortnight.

A portent of death, the Ly Erg stops his victims on pathways near water with the raising of his red hand. A cautious person would retreat, for engaging him in combat means certain death within a fortnight. That red hand of his is supposedly bloodstains from years of kills in combat. Personally I wonder why he doesn’t wash, but that’s just me.

Some say that this fae yearns to be a soldier and that is why he is dressed as one. Who doesn’t want to share in the glory of heroes? Especially if you’re a warrior such as the Ly Erg.

In most tales, there is only one Ly Erg, in other tales, Ly Ergs are born from the souls of dead soldiers.

Whether one or legion, this is a dangerous type of fae known for their diminutive size (let’s say a ten-year-old human child), red palms through which they absorb blood from their enemies (it’s not known whether they are feeding on the blood or on the person’s life-force), liking for haunting battlefields, and their allegiance to the Unseelie Court.

Point is: stay clear of this fellow or die.

Ly Ergs are part of the Dark Court in the “Wicked Lovely” books.

Size: Medium, the size of Elf

In Mythika: Ly Erg is the right hand of the Horseman/Rider of War, he is the most powerful of the Redcaps, and the one that currently holds the greatest number of kills on his name. Ly Erg looks like a ugly elf, dressed completely in armor, ready for war, he is often followed around by countless of Muramasa Blades which feel an magnetic attraction to this murderous Elf. His right hand is always dripping with the blood of his countless victims, and the bleeding will never stop, this blood is poisonous and when someone gets it in his mouth or wounds he will go berserk and attacks anything near him, Ly Erg as cruel as he is loves to see self-destruct in other creatures. As Right hand of War, Ly Erg isn’t to be taken lightly, he is a master in the arts of melee combat and has never been beaten before, when he challenges someone and that someone takes the challenge there is no escape, only death, after taking the challenge there will appear a magical barrier around the Ly Erg and his victim which will kill the first one to step over the line, so fleeing won’t save you. It is said that like the Redcaps do with their bloody caps the Ly Erg takes the blood on his magical glove.

Ly Erg in My Writing

Origin of the Fae: Ly Erg

Short, red palmed Fae who wear the uniforms of English soldiers from the war against Napoleon.
Their red palms absorb blood. They prefer human blood, but the Compact limits the amount they can get.
They are restricted to living in the Unseelie Realm.
There are many, many of them.

Where did you hear about Ly Ergs for the first time? What do you think of these bloodthirsty creatures? Any folklore about Ly Ergs you’d like to share? Check out my Pinterest board dedicated to the subject.