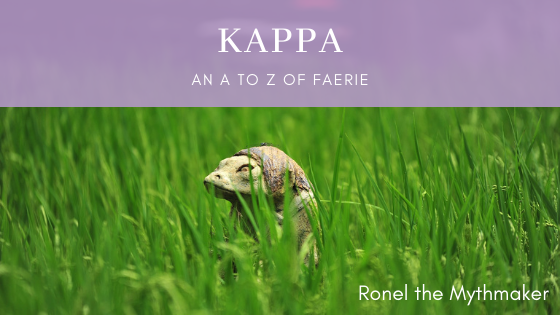 K is for Kappa

Amphibious creatures have always caught the imagination of surface dwellers. The Kappa from Japanese folklore is perhaps the most famous of its kind.

Ancient Tales and Folk-lore of Japan, by Richard Gordon Smith, [1918]

The pond was old and deep, covered with water plants, and had never been emptied within his memory. It was said to contain a kappa (mythical beast, half-turtle, half-man).

In Japan there is a vampiric creature living in ponds called a kappa. It looks like a green child with a long nose, round eyes, tortoise shell on its back, webbed fingers and toes, and smells like fish. However, its most interesting feature is a dent in the top of its head deep enough to hold water. The water sitting in the dent is representative of its power. Should a kappa attempt to attack you, quickly bow to it. As it is a stickler for courteousness and ritual, the kappa will take pause to return the bow. When it does so, the water in the dent will spill out, rendering the creature powerless.

It may well be that the kappa is the only vampire with a cucumber fetish. No matter what may be happening around it, a kappa will stop whatever it is doing to steal away with one should the opportunity arise. By writing one’s family name on a cucumber and giving it to a kappa, the entire family will be temporarily protected from its attacks.

A kappa can even be bargained with, willing to enter into contractual agreements not to attack certain people.

The Element Encyclopedia of Magical Creatures by John and Caitlín Matthews

In the Shinto religion of Japan, the Kappa are water spirits who pull children into the water and drown them, and who also attack travellers. They are unable to survive for long on land since they must keep their heads wet. They are described as having long hair, the body of a tortoise, scaly limbs, and an ape-like face. At some time in the past they may have been wise monkeys, but over the years they have changed into their current form. They live on a diet of cucumber and blood and they fly on enchanted cucumbers which sprout wings like dragonflies. They may well have influenced the creators of the children’s television series Teenage Mutant Ninja Turtles.

The yokai of Japanese folklore are fascinating. Especially the Kappa, an amphibious yokai. We’ll classify it as a faery. Kappas are depicted as green, child-sized humanoids with webbed hands and feet, with a turtle-like carapace on their backs, and with a depression on its head that holds water. This depression or dish is extremely important: as long as it retains water, the Kappa can stay outside its water source at full power. If the dish is damaged or dry, the Kappa is weakened.

Kappas love cucumbers and enjoy sumo wrestling. They live in the ponds and rivers of Japan. This mischievous creature lives a solitary life but will on occasion befriend other fae. Some Kappas, though, are malevolent to the point of drowning people and eating human flesh. Because of this occasional malevolent behaviour, there is a tradition to write the names of family members on cucumbers and set them afloat on streams in an attempt to appease the local kappa and protect the family.

This mysterious and terrifying creature still holds sway over the countryside of Japan where locals hang warning signs near bodies of water and leave cucumbers just in case.

From the author of Rashomon comes a Swiftian satire of Japanese society thinly disguised as the fictitious Kappaland. Peopled with creatures from Japanese folklore, Kappland serves as a vehicle for the humorous examination of the moral foibles of Japanese society in the early 20th century.

The kappa, in Japanese folklore, are water goblins that are closely associated with a certain town in the country. Unfortunately, the area is also home to a militant splinter group of researchers dedicated to developing amphibious super soldiers based on the kappa of legends. When their experiment’s result in murder by some escapees, the appearance of an actual kappa, and the triggering of an atomic bomb, the consequences are of epic proportions.

Kôichi Uehara is a fourth grade student living in Higashikurume City, a suburb of Tokyo. One day he picks up what he thinks to be a fossil of an ancient creature but turns out to be a baby kappa (a mythical Japanese water creature) that was sleeping underground for the past 300 years, and he names it “Coo”. Kôichi and Coo become good friends and the kappa starts living with the human boy’s family. However, Coo cannot not fully adjust to life in present-day Higashikurume and starts to miss his own family. On a hot summer day, Kôichi and Coo decide to go on an adventurous road trip to find his own kind.

The Kappa is a Japanesewater demon that feeds on humanblood.[1] They are known for strangling humans that invade their shallow ponds.

Kappa in My Writing

Origin of the Fae: Kappa
This creature loves cucumbers. It also enjoys cabbages. Little known fact: it just likes green vegetables and will eat whatever is in season.
Kappas are known to cause mischief. Those who know of their local Kappa, will offer it something to appease it (usually a cucumber) and the Kappa will leave that person alone for whatever timeframe was negotiated.
Kappas can be helpful. For a price. Offer it enough green vegetables and it will do whatever needs to be done.
A Kappa can be identified by its turtle shell, green skin, child-like body and the basin on its head which should always be filled with water (it’s the source of its power).

Where did you encounter the kappa for the first time? What do you think of this creature? Any folklore about the kappa you’d like to share? Check out my Pinterest board dedicated to the subject.