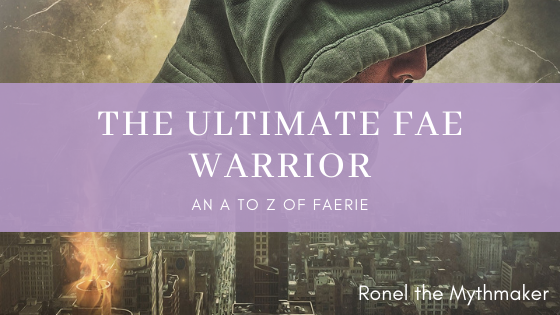 W is for Warrior

Knowing that an ultimate warrior, one adept at all forms of combat, can protect you from all the enemies you’ve made with your loud mouth sounds like an awesome idea. Or maybe that’s just me.

Wisdom dwells oft in warriors, and therewith
Courage to face alone a thousand men!
But dull is wit and brutal bravery
That knows not mercy—source of all true deeds.
For even war at last doth serve her ends,
The people’s safety. So the saying is,
“Who knows not pity is no warrior!”
Behold the men, whom deep we reverence,
As showing forth our country’s “Knightly Way.”

Stories from the Faerie Queene by Mary Macleod. [1916]

ONE of the best loved knights at the court of the Faerie Queene was Sir Calidore, for even there, where courteous knights and ladies most did throng, not one was more renowned for courtesy than Calidore. Gentleness of spirit and winning manners were natural to him, and added to these, his gallant bearing and gracious speech stole all men’s hearts. Moreover, he was strong and tall, and well proved in battle, so that he had won much glory, and his fame had spread afar. Not a knight or lady at the Court but loved him dearly; and he was worthy of their affection, for he hated falsehood and base flattery, and loved simple truth and steadfast honesty.

The Tuatha de Danann (“people of the goddess Dana”) were the magical and mythological race who lived in Ireland and defeated both the Firbolgs and Fomorians for control of the country. According to the Book of Invasions, which details the mythological history of the country, they arrived in Ireland on May 1 upon the mountains of Conmaicne Rein in Connachta having come from four northern cities. Dark clouds came with them and were said to hang in the air for three days. They were the fifth group of people to have settled the island.

For three thousand years the Tuatha de Danann ruled Ireland until the Milesians fought them for control. Neither side was able to gain the advantage so an accord was struck – the Milesians would rule the surface world and the Tuatha de Danann would have dominion over the rest. This bargain included the fairy mounds, the invisible islands, and the Underworld. Becoming a race of fairy people these timeless immortals still interact with the surface world, but only when the veil between the two realms is thin. When occasion permits, these trooping fairies will parade, dressed in their finest, upon their magnificent horses. Described as being aristocratic, fair skinned, perfectly physically fit, red-headed, and tall, the Tuatha de Danann were skilled in poetry, magic and science.

The Fairy King of the Lough Lean fairies in Ireland, O’Donoghue rules over his fairy subjects with justice, kindness, and wisdom. It is said in Irish folklore each May Day this renowned warrior known for his pacific virtue rides forth from his underwater home mounted upon his war horse, disappearing into the lakeside mist of Loch Kjllarney.

Irish hero. Described as the son of the physician god, Dian Cécht, which would make him one of the Tuatha dé Danann.

The Element Encyclopedia of 5000 Spells by Judika Illes

Catnip, a herb of the mint family, is now relegated to stuffing cat toys. However, it serves many other magical uses, from aphrodisiac to healing. It was once a staple of warriors’ magic as well. Chew on the fresh herb for courage, daring, fierceness, and protection.

There are various notable warriors in folklore, some more powerful than others.

Beawulf, master tactician with unprecedented strength, killed a rampaging monster and its monster mother without much effort, killed a couple of sea serpents while out swimming, and got rid of a dragon terrorising his people. He was a wise king, brought peace, and took out monsters without weapons if the need arose.

Cú Chulainn’s mere presence on the battlefield was enough to make his enemies tremble – so much so that when he died during battle, he tied himself to a rock with his own intestines to keep upright so he would seem alive. Strength, cunning, agility, loyalty, battle rage to rival the Hulk, a spear that can kill anyone and an awesome sword – this guy had it all.

Berserkers worshipped Odin, were unruly warriors who attached themselves to royalty as bodyguards, were savage in battle, and were a contributing factor to the myth of werewolves thanks to their penchant for wearing wolf skins in battle.

Samurai, the warrior nobility, began as imperial guards and continued to be part of the ruling class. They had to keep the peace between the clans and were the only ones who had the right to carry a katana – though this alienated them from other classes. The samurai had an unwritten, unspoken code of honour, discipline and morality. They could fight with spears, bows and arrows, and, of course, the katana.

The Assassins lived in the mountains of Persia. Through covert murder of leaders they considered enemies of their state, they kept peace in their region. These warriors were skilled in espionage, hand-to-hand combat as well as assassination. Their preferred method of killing was by dagger, not arrows or poison. The modern term “assassination” comes from the tactics used by the Assassins.

Many others exist, but to talk about them all would be longer than could fit into a nutshell.

In Arrow, Oliver Queen AKA Green Arrow is a formidable warrior. He owes this to the training he received from various mentors. You can learn about them here.

In Aquaman, Arthur is trained by Nuidis Vulko to become a skilled warrior. Along with his innate talent to communicate with sea creatures, this half-human half-Atlantean becomes the king of the ocean — and even beats his half-brother, a great warrior, in a duel.

In Merlin, Arthur is the ultimate warrior.

“Come on then. I warn you, I’ve been trained to kill since birth.”

In Blood Song, Vaelin is trained to be the ultimate weapon by the Sixth Order.

In Divergent, Four is one of the greatest warriors in Dauntless.

Though overshadowed by Tris (it’s mainly her story), he shows all the characteristics an ultimate warrior should have.

The Ultimate Warrior in My Writing

Origin of the Fae: The Ultimate Warrior – Cian, the Assassin
No-one knows where he came from. Everyone knows that he isn’t born from either Court. He is as powerful as the Dark King, the Faery Queen, and the King of the Dead. He walks unhindered between Realms. He is a powerful warrior. He silences those who oppose the monarchs. He prefers spending time in the Seelie Court. He is feared by everyone.
He lives by his own code of honour: when fae are in trouble, he does what is necessary to save them. And when Faerie is in trouble, he does what he thinks is right to keep her safe.

What do you think of Cian? Do you have a favourite kind of warrior? Any folklore about warriors you’d like to share? Check out my Pinterest board dedicated to the subject.