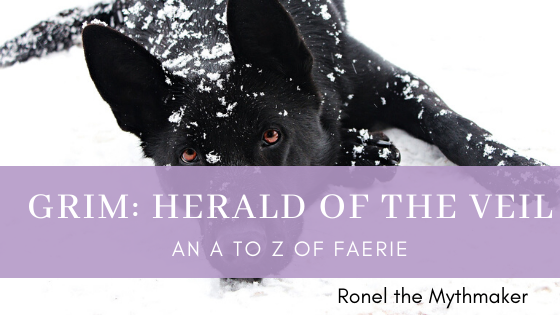 H is for Herald.

I love using black dogs in my writing. Today we’re looking at the Grim.

The belief in the demoniacal possession of animals was prevalent in Europe for several centuries, and in order to drive away the evil spirits it was customary to employ various exorcisms and incantations, which were supposed to be infallible after approval by ecclesiastical authority. Reginald Scot, in his “Discovery of Witchcraft, says that, according to the testimony of reliable authors, spirits were wont to take the forms of animals, and especially of horses, dogs, swine, goats, and hares. They also appeared in the guise of crows and owls, but took the most delight in the likenesses of snakes and dragons. Bewitched animals were usually of a black color. A black cat is the traditional companion or familiar of witches the world over, and the black dog is also associated with sorcery in the folk-lore of some lands. Among the Slavs the black demon Cernabog has this form, and the black hen is a common devil symbol in mediaeval witch-lore. The gypsies believe, moreover, that black horses are gifted with a supernatural sight, which enables them to see beings invisible to the eye of man. Black animals figure prominently in many legends of the dark ages.

In Jabez Allies’ On the Ignus Fatuus or Will-O’-the-Wisp and the Fairies (1846), an account of hauntings in the villages of Worcestershire, England, Grim appears as one of four fairies in the guise of black horses pulling a ‘mysterious black wagon… in the night’s dread gloom.’

Grim is also described as taking on the form of a black dog, similar to the Church Grim, the guardian spirit of a church and its graveyard.

There are many different species of black dogs in fairy mythology, especially in the British Isles; generally these injurious fairy creatures are described as being a large and fierce dog, typically with a black coat. Its eyes are said to glow red or yellow, its mouth filled with vicious teeth. To see one, or hears its howl is a death omen, only a few rare stories exist of the black dog playing the role of a guardian and protector. Black dogs patrol deserted roads usually invisible right up until the moment it attacks; prior to that, only the clicking of its claws can be heard; crossroads and midnight are also common additions to the black dog lore.

Irish, Scottish and British mythological figure. This spectral creature, usually shaggy and as big as a calf, was familiar throughout the insular Celtic world as an indication of great change and probable death.

Folklore of the Grim in a Nutshell by Ronel

The Church Grim or Kirk Grim comes from a folk memory of sacrifice when black dogs were buried alive in a churchyard to sanctify the ground and to watch over the rest of the dead.

As the guardian of old churchyards, the Church Grim appears in the form of a black dog and protects the dead from nefarious supernatural creatures. This dog is often seen on stormy nights and is a portent of death.

In the Harry Potter books, a Grim is as terrifying as the folklore above.

“The giant, spectral dog that haunts churchyards! My dear boy, it is an omen—the worst omen—of death!” – Sybill Trelawney discussing the Grim with Harry Potter.

The Grim is an omen of death, which is reputed to bring about the demise of the person who encounters it. The Grim takes the shape of a large, black, spectral dog. Perhaps the most well-known of omens, the Grim has earned infamy throughout the Wizarding world and is considered to be one of the worst, if not the worst, omens around.

It is based on a Hellhound, known as a Bearer of Death. Folklore says if you see one, you will die.

Grims in My Writing

Origin of the Fae: Grim

The Grim is a black dog that looks a lot like a wolf. It has brown markings on its legs, a lot like that of a Cù Sìth. They can become shadows to stay invisible to mortal eyes.
They live in the Otherworld, guarding the Mistress of the Veil between worlds. Their job is making sure that all festivities that have to do with the mortal world and theirs go smoothly (Samhain, Solstice, etc.). Sometimes they have to hunt Faery-Hybrids, magical lakes and other things that threaten their Mistress or the festivities they safeguard. They also occasionally hunt down escaped spirits of the dead.
You know you are close to the Veil if you spot a Grim.
Like all black dogs, they are fierce protectors and loyal.

What do you think of the Grim? Where did you hear of it for the first time? Any stories about the Grim you’d like to share? Check out my Pinterest board dedicated to this fae.

#AtoZChallengeA to Z Challenge 2020black dogsfaefaeriesfolklorefolktalesgrimOrigin of the Fae: Grim

12 thoughts on “Grim: Herald of the Veil #AtoZChallenge #folklore”