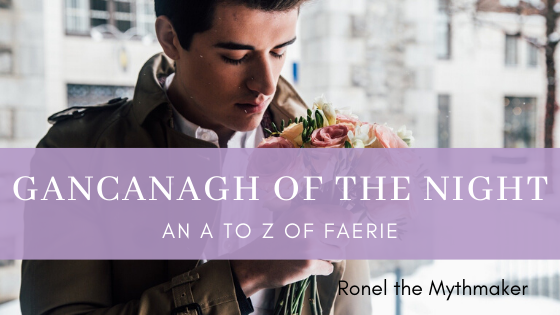 The capricious Fae have to be my favourite to write about – you never know what they’re going to do! Let’s look at the faery heartthrob that no woman can resist.

You can check out the lyrics for “I Wanna” by The All-American Rejects here. It’s the first song I thought about when thinking “all-consuming love”.

Fairy and Folk Tales of the Irish Peasantry Edited and Selected by W. B. Yeats [1888]

O’Kearney, a Louthman, deeply versed in Irish lore, writes of the gean-cānach (love-talker) that he is “another diminutive being of the same tribe as the Lepracaun, but, unlike him, he personated love and idleness, and always appeared with a dudeen in his jaw in lonesome valleys, and it was his custom to make love to shepherdesses and milkmaids. It was considered very unlucky to meet him, and whoever was known to have ruined his fortune by devotion to the fair sex was said to have met a gean-cānach. The dudeen, or ancient Irish tobacco pipe, found in our raths, etc., is still popularly called a gean-cānach’s pipe.”

The word is not to be found in dictionaries, nor does this spirit appear to be well known, if known at all, in Connacht. The word is pronounced gánconâgh.

In the MS. marked R.I.A. 23/E. 13, in the Roy’ Ir. Ac., there is a long poem describing such a fairy hurling-match as the one in the story, only the fairies described as the shiagh, or host, wore plaids and bonnets, like Highlanders. After the hurling the fairies have a hunt, in which the poet takes part, and they swept with great rapidity through half Ireland. The poem ends with the line-

[paragraph continues] “and I had travelled the five provinces with nothing under me but a yellow bohalawn (rag-weed)”. [Note by Mr. Douglas Hyde.]

Beware the handsome Irish Love-talker, a clay-pipe smoking fairy who seduces solitary maidens with his handsome looks and sweet whispers, although his lips are cold and he casts no shadow. His conquest accomplished, he vanishes into thin air, abandoning the lovelorn girl to her fate: to slowly fade away out of despair and a broken heart.

In the folklore of Ireland and Scotlant the solitary Gan Ceanach (“love talker”) appears in secluded glens as a debonair little man smoking a dundeen (clay pipe). He casts no shadow and a mist lingers near him. Birds stop singing when Gan Ceanach is near. It is unlucky for a young man to run into this fairy, as they will then be compelled to spend all of their money on trinkets and presents for their ladies. Women find themselves seduced by his conversation, gentle voice, and twinkling black eyes. If a maiden should ever kiss a Gan Ceanach he will instantly disappear leaving his victim to pine to death in his absence.

Scottish and Irish folkloric figure. Maidens in Scotland were traditionally advised to stay away from lonely country roads, especially those in mountain areas, for they might meet this handsome fairy – readily recognizable by his clay pipe – who would make them promises so sweet that, after he evaporated from sight, the girl was left to pine away and die.

The Irish poet Ethna Carbery wrote of him: “Who meets the Love-Talker must weave her shroud soon,” for his love was destructive.

Gancanagh in a Nutshell by Ronel

The faery-heartthrob who is irresistible to human women is known as the Gancanagh. Whether it is pheromones, scent or just being gorgeous, women cannot resist him. And once they’ve been seduced by him whispering sweet nothings in their ears, they are addicted to him. Magic, toxin in his skin, or superb skill, once women have had a Gancanagh, they can only be satisfied by him – and he never goes back for sloppy seconds, so the women fall into madness, despair and death as they pine away for him.

Legend has it that this hedonist roams the forests and meadows, seducing milkmaids and shepherdesses. One can identify him by his dundeen (clay pipe) and scent. Also, animals stay quiet when he is near (maybe more to warn humans to stay away than to listen to his sexy voice) and he has no shadow (no competition?). Women will fight over his attentions. Like all fae, he can be warded off by iron.

The only book series I’ve found a Gancanagh in is the Wicked Lovely series by Melissa Marr where Niall’s powers as a Gancanagh are supressed when he becomes the Dark King. (He’s of course the tortured-soul-type who believes his powers to be a curse.)

Origin of the Fae: Gancanagh

Male Faery in Irish and Scottish Mythology that is known for seducing human women.
Personated by love, idleness and hedonism.
This faery heartthrob has an intoxicating substance in skin – contact makes him addictive. Once bedded by him, human women cannot think of anything but the next fix of him and they usually wither away since he deplores anything resembling commitment.
Suave and charming, he exudes pheromones to both sexes that make them want to be near him and please him. Sometimes to the extent of violence among each other to do so.
Nocturnal, social creature. Loves parties and human companionship.
His spell on humans can be broken if they consume a tincture of liquorice, vanilla and rooibos (can be mixed in a drink). He can be chased off by the presence of strong human magic users showing that they are a viable threat.

What do you think of this Faery? Have you heard of it before? Check out my Pinterest board dedicated to the Gancanagh.

15 thoughts on “Gancanagh of the Night #AtoZChallenge #folklore”