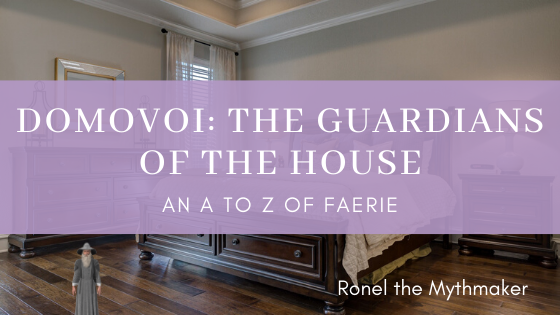 I is for Invisible.

I was skimming through a book I bought a while back, looking for monsters to use in a story when I came across the Domovoi. It is much like the Brownie from Celtic folklore, but with a couple of unique twists.

The Russians: An Interpretation by Richardson Little Wright [1917]

The moujik’s respect for the native fays and sprites is very poetic, though explicable because his life is lived close to Nature. Fishermen offer small propitiatory sacrifices to keep the house fairies or domovoi in a contented frame of mind.

The domovoi, or house fairies, are a very moodish lot. You must not mention their names after twilight, and if you ill-treat them they will make sleep impossible. If your house is blessed with a good domovoi who love you and your children, they will do many things for you — they will take care of the horses, watch over your daughter, see that she gets a good suitor, and will never let you or yours know starvation.

If, indeed, the earliest dwelling of man was a cave, rather than a tent, the household fire was still at its entrance; and the threshold was the hearthstone.  When, in the progress of building-changes, the hearthstone was removed to the center of the building, or of the inner court, its sanctity went with it, as the place of the family fire. Thus, for example, in Russia, the Domovoi, or household deity, who is honored and invoked at the threshold, “is supposed to live behind the stove now, but in early times he, or the spirits of the dead ancestors, of whom he is now the chief representative, were held to be in even more direct relations with the fire on the hearth.”

The Domovoi or household demon is that one most commonly to be heard discussed by the peasants at work and at rest, at market and fete, on festival days and the holidays in honour of any official function. ‘What will the Domovoi do to-day?’ is the peasants’ first thought. What can he do? Much. He haunts dwellings and plays disagreeable tricks on unsuspecting housewives and their husbands; but he can also be domesticated and made almost harmless. However, he is none the less feared, and the peasantry often allude to him as ‘ grandfather.’ Peasants, as a rule, tell me that the Domovoi cannot be seen, but those who have been honoured by a private view are looked upon with nothing short of veneration. By these the Domovoi is stated to be in possession of a rasping voice, and to be covered with soft hair, like the down on a baby’s skin, even to the palms of his hands. His principal occupation is to hide in stores, cupboards, boxes, and moan dismally, occasionally asserting himself by sitting on men’s chests while they sleep.

A domestic spirit of Slavic folklore.

Traditionally, they made their home at the threshold points of the house, such as the hearth, the cellar, or the loft, and were guardians of the household and its property, including its animals. Members of the household left offerings of milk or bread to thank the Domovoi for completing household chores or to ensure their continued protection and guardianship.

In Russian folklore the domovik is a male household spirit similar to the Brownie; it appears as an old grey-haired man. Loving fire, it lives behind the stove. At night, food is left out for him so it will bring luck and prosperity to the household.; it preferred bread, incense, juniper, porridge, salt, and tobacco. If the domovik is abused or neglected he will burn down the house. Domovik is said to have a wife named Domovikha.

The domovik was also consulted as an oracle. If a question was asked of it and his invisible touch was soft and gentle than it was a sign of coming happiness; a cold or prickly touch foretold of death or misfortune.

Folklore of the Domovoi in a Nutshell by Ronel

The domovoi are household spirits from Slavic folklore generally depicted as small, bearded men. These shape-shifters would sometimes take on the appearance of the head of the household or, rarely, that of a cat or dog. They are sometimes described as having tails and horns along with their long, grey beards. But they are more often heard than seen and it is said to have a hollow, harsh voice.

Their chores include anything in and around the house and they also act as protectors – especially against the supernatural. The domovoi resides under the threshold of the house.

If the household the domovoi protects turns rude or unclean, it turns into the worst version of itself, pulling pranks and harassing the family until they act correctly once more.

The domovoi also acts as an oracle: if it dances and laughs, good fortune will befall the household; if it rubs the bristles of a comb, a wedding will soon follow; but if it extinguishes candles or becomes visible, great misfortune will come.

There’s a movie! In Russian it was released as Domovoy and in English as The House Elf.

A single mother buys a flat in the Soviet high-rise in Moscow, one thing she doesn’t know – there is a mythical creature – a home elf (Domovoy in Russian) – lives in the flat for ages. And he is against any new tenants. There is also a witch who was paid to get rid of the home elf buy an estate agent, so she could sell the flat.. and the witch learns there is a treasure hidden in the old flat. Now the new home owners have to make friends with the home elf, who is protecting the flat from the witch as well.

Clearly the summary was written by someone whose first language isn’t English, but the story still sounds great!

Domovoi in My Writing

Origin of the Fae: Domovoi

The Domovoi are invisible servants. They do not clean or cook, but they do take care of the animals of whatever dwelling they’ve claimed as their home. They even live with humans. Most importantly, they protect the home from invaders – whether supernatural or human.
They act as a sort of oracle: if the Domovoi become visible, it foretells of catastrophe approaching. If they extinguish candles (lights) trouble is imminent.
If one sees the Domovoi, they have little horns, tails, and long, grey beards. They are waif-thin and wear grey suits (they act much like butlers; the suits matching the era they live in).
Domovoi are patient, with high tolerance for neglect.
They only consume bread and milk.
If they are not regularly fed and given the proper respect on occasion, they turn feral and attack: the inhabitants of the dwelling they protect, usually by pinching or worse; the animals on the property, mostly by scaring them and chasing them off; and even the land itself, making plants wither and die. You can tell that they’ve turned feral before they attack: they have nasty sneers and their eyes are red. The longer the problem is left untreated (feeding them and telling them how awesome they are), the more malicious they become until they need to be removed by other Fae.

What do you think of the Domovoi? Have you heard of this creature before? Do you have any stories about the Domovoi you’d like to share? Check out my Pinterest board dedicated to this fae.

10 thoughts on “Domovoi: The Guardians of the House #AtoZChallenge #folklore”