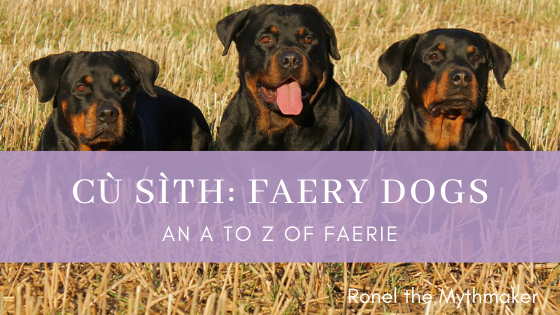 C is for Cù Sìth.

The Cù Sìth or Faery Dog plays an important role in most of my stories. Most of my heroines have an important task to perform in the future of Faerie – and that makes them targets for the bad guys. So they have a Cù Sìth protector. Before we get to my version of Faerie, let’s check out this wonderful dog in folklore.

(Pronounced coo-shee.) Scottish fairy dog. His dark green color marks him out as distinct from other Celtic fairy hounds. Other fairy dogs are generally described as either white with red ears, or black; the most common type in England are black dogs. As described by J. G. Campbell in Superstitions of the Highlands and Islands of Scotland (1900), the cù sìth is the size of a young bull, with shaggy coat and a long tail coiled or plaited on his back; his huge footprints can often be seen in the mud or the snow. He runs silently, gliding along in a straight line. Three loud barks, which can be heard by sailors far out at sea, are the signal that the cù sìth is out hunting.

Scottish mythological being. Unlike other fairy creatures, the Highland fairy dog was neither black (see black dog) nor red with white ears, but dark green and the size of a small bull. It made enormous footprints, the size of a large man’s, and always moved in a straight line as it traversed the world hunting for prey, including other dogs.

The Cù Sìth could bark, and loudly, but only three times. On the third, it sprang forward and devoured anyone nearby.

…Also straddling the line between life and death was the ambiguous fairy dog, a fearsome apparition with burning eyes and a terrifying howl…

The Cù Sìth is a spectral dog found in the Highlands of Scotland. It is similar to the Irish Cù Sìdhe and the Welsh Cŵn Annwn. These fairy dogs are the size of a large calf with the appearance of a wolf and have dark green, shaggy coats (unlike most other spectral dogs that are black, white or red). Their long tails are either curled or braided, and their paws are the size of a man’s hand.

Cù Sìth means “faery dog” and thus the green of their coats is just another connection to the fae (green is traditionally the colour of faeries).

The Cù Sìth is thought to live in the clefts of rocks in the Highlands and to roam the moors and mountains. It is dangerous to meet this silent hunter and even worse to hear its bark: The Cù Sìth lets out three loud barks that can be heard for kilometres around and if you are still around when the third bark sounds, you will die of terror. In that regard this faery dog acts much like the Banshee heralding death, or even as Death itself collecting souls for the Other Side.

The only supernatural dog that fits the definition of the folkloric Cù Sìth I could find in modern culture is Mrs. O’Leary (and the other hellhounds) in the Percy Jackson universe..

Mrs. O’Leary is Percy Jackson’s pet hellhound. She is thought to be the only friendly hellhound in existence.
Mrs. O’Leary was born from Cerberus and Nyx. She was originally Quintus’ hellhound pet. He tamed her and they became very close. According to Quintus, the story of how he got Mrs. O’Leary involves “many close calls with death and quite a few giant squeaky toys.”

Cù Sìth in My Writing

I give all my Cù Sìth gemstone names (or I’ll name them after my Rottweilers). <grin>

Origin of the Fae: Cù Sìth

“Cù Sìth” is sometimes interchangeable with “Faery Dog”.
The Cù Sìth is a Faery dog in Scottish Mythology that is usually in the form of a big black-and-tan dog (Rottweiler).
They have amber coloured eyes that burn brightly as they do magic.
They protect those of the Mist – humans with magical ability who are important to the Fae Monarchs and children of both worlds (half Fae and half mortal).
They use mindspeak (a form of telepathy) to communicate and all of them speak without contractions – except modern-day Saphira (and those who have gone rogue).
The Cù Sìth are the most powerful of all Fae. They control the very fabric of time and space. They create the Faery circles that are the most powerful and accurate of all magical teleportation. They can go anywhere in Time to correct or interfere in someone’s life.
Whenever the Cù Sìth protect someone, all who know about them know that the person who is protected is something special.

What do you think of the Cù Sìth? Where did you hear about this brand of faery dog for the first time? Any stories about this fae you’d like to share? Do you like the twist that they look like Rottweilers in my version of Faerie? Check out my Pinterest board dedicated to the Cù Sìth.