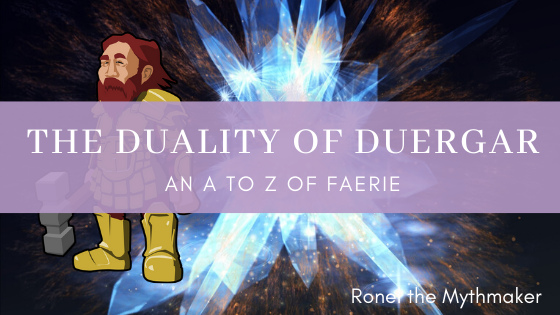 D is for Duergar.

From Middle-Earth across all fantasy to the newest Rick Riordan Magnus Chase novel, dwarfs are all the rage.

The Fairy Mythology by Thomas Keightley [1870]

(I dwell the earth beneath, I possess, under the stone, my seat.)

THESE diminutive beings, dwelling in rocks and hills, and distinguished for their skill in metallurgy, seem to be peculiar to the Gotho-German mythology [a] Perhaps the most probable account of them is, that they are personifications of the subterraneous powers of nature; for it may be again observed, that all the parts of every ancient mythology are but personified powers, attributes, and moral qualities. The Edda thus describes their origin:-

“Then the gods sat on their seats, and held a council, and called to mind how the Duergar had become animated in the clay below in the earth, like maggots in flesh. The Duergar had been first created, and had taken life in Ymir’s  flesh, and were maggots in it, and by the will of the gods ‘they became partakers of human knowledge, and had the likeness of men, and yet they abode in the ground and in stones. Modsogner was the first of them, and then Dyrin.”

The Duergar are described as being of low stature, with short legs and long arms, reaching almost down to the ground when they stand erect. They are skilful and expert workmen in gold, silver, iron, and the other metals. They form many wonderful and extraordinary things for the Aeser, and for mortal heroes, and the arms and armour that come from their forges are not to be paralleled. Yet the gift must be spontaneously bestowed, for misfortune attends those extorted from them by violence.

In illustration of their character we bring forward the following narratives from the Edda and Sagas. The homely garb in which they are habited, will not, it is hoped, be displeasing to readers of taste. We give as exact & copy as we are able of the originals in all their rudeness. The tales are old, their date unknown, and they therefore demand respect. Yet it is difficult to suppress a smile at finding such familiar, nay almost vulgar terms applied to the great supernal powers of nature, as occur in the following tale from the Edda.

Völuspá (The Prophecy of the Seeress) is the first and best known poem in the Poetic Edda. Basically, it tells the story of how the world was created and how it will end. It’s one of the most important primary sources for the study of Norse Mythology.

You can read it (with English translation and notes) here.

Here’s a screenshot of the Dvergatal in Runes, Old Norse and English:

The rest of the Dvergatal (Runes and all) can be read here.

Dwarfs who dwell in rocks and hills; noted for their strength, magical powers and skill in metallurgy. They are the personification of the subterranean powers of nature. According to the Gotho-German myth, the Duergar were first maggots in Ymir’s flesh, but afterwards assumed the likeness of men. The first Duergar was Modsogner, the next Dyrin.

A tale of the malicious Duergar of the Simonside Hills of Northumberland is related in F. Grice’s Folk-tales of the North Country (1944).

According to Scandinavian lore, the duergar were maggots who consumed the flesh of the dead giant, Ymir; as they ate they were gifted with human knowledge and took on the general appearance of mankind, but were short. Skilled gold-, iron-, metal-, and silver-smiths they forged many magical items for both the Æsar and moral heroes. They are said to reside in the underground realm of Nidavellir.

In the folklore of France and northern England the duergarrs is a malicious species of dwarf; it gains no greater pleasure than in tricking people into dying.

Folkloric figure. Dwarfs or little people found in most Celtic lands were immigrants from Scandinavia or Germany, where they were common folkloric characters resembling trolls. In Irish lore dwarfs were either fairies or simply short people.

“Duergar” can refer to the race of dwarfs in Norse mythology or the Simonside Dwarfs.

In Germanic mythology, dwarfs are small human-shaped beings (sometimes short and ugly) that dwell in mountains and in the earth. They are usually associated with mining, smithing and crafting.

The Simonside Dwarfs are a race of dwarfs associated with the Simonside Hills in northern England. They apparently delight in leading travellers astray in the manner of the will-o’-the-wisp. Mentioned in newspapers (the Morpeth Gazette, 1889) and books (The Duergar in Folk Tales of the North Country by F. Grice, 1944, and Legends and Folklore of Northumbria, 1930) these menacing dwarfs are led by one known as Roarie.

In Norse mythology, duergar are entities deriving from rocks and earth. They are known for they craft, metalwork, wisdom and greed. They are described as having corpse pale skin and jet-black hair.

The Lord of the Rings

Dwarves were a race of Middle-earth also known as the Khazad (in their own tongue), Naugrim, meaning ‘Stunted People‘, and Gonnhirrim, the’Masters of Stone‘.

Dwarves are creatures in Norse mythology and live in Nidavellir which is one of the Nine Worlds which is on the branches and roots of the world tree Yggdrasil.

Dwarves have evolved from maggots that chewed into the decaying flesh of Ymir‘s corpse not very long after the beginning of creation. Their world developed under Midgard and has no sunlight. They can range in height, some, like Blitzen, being able to pass as short humans. They are master craftsmen and when they make something, they make it to last, giving their creations such as cups, furniture and weapons names and claiming they have souls.

Dwarves are subterranean creatures and they turn to stone in the sunlight. They are also tougher, being able to mold rock easily.

Duergar in My Writing

Origin of the Fae: Duergar

“Duergar” is interchangeable with “Dwarves” (not Dwarfs), depending who in the Faerie realm you are talking to. For most, Duergar means that huge Dwarves have arrived, ready to conquer.
Though not part of either the Seelie or Unseelie Courts, they are feared nonetheless by most Fae.
Duergar are as tall as short humans. They have rough beards, big muscles, sturdy bodies, and hands that can crush skulls and create intricate metal designs in equal measure. Depending on from where they hail, Duergar have skin tones ranging from snowy white to ebony brown.
Most Duergar generally keep to themselves, playing with gems and metal yielded by the earth, though there are those who have excessive greed. It had led them to dig extremely deep into the earth, nearly to the dungeon Tartarus where evil immortal creatures are kept prisoner.
Some Duergar have gone to work for Dagda in the Underworld. Here they have unlimited access to the treasures the earth holds. They work as bodyguards and general servants to Dagda.
All Duergar are extremely gifted where it comes to working with gems and metal. The objects they create thereof is renowned. They’re also known for their strength and magical powers.
Those who prefer to conquer (give in to their greed), do not have qualms about augmenting their powers with dark objects. They are the worst of their race. Those who cross the Dark King through their greed (by, say almost opening Tartarus), become part of the Unseen Unseelie and lose all they had as Duergar (their culture, homes, personality. Etc.) – it’s a fate worse than death.

Have you heard about the duergar before? Where did you encounter dwarfs for the first time? Any folklore about dwarfs you’d like to share? Check out my Pinterest board dedicated to the duergar.

16 thoughts on “The Duality of the Duergar #AtoZChallenge #folklore”