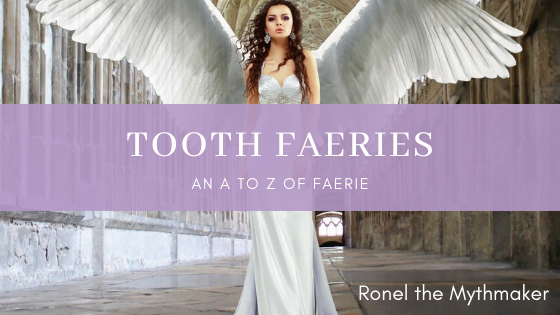 T is for Tooth

In South Africa we have the tooth mouse, but it seems the tooth fairy is much more popular in other countries. Let’s look at these tooth-obsessed creatures.

In the normative Tooth Fairy ritual, the child, following parental instructions, places the lost tooth under his pillow at night. Some children leave notes with the tooth, explaining the loss and requesting payment; others rely on the tooth alone to make the plea. Once the child is asleep, the parents replace the tooth with a gift, or, more commonly, money. The child understands upon awakening that the Tooth Fairy has made the exchange. While the Tooth Fairy is now an international phenomenon, both authors agree that in form and usage this fairy complex derives from the United States.

The tooth fairy is a fey that exists in the folklore of European cultures and contemporary North America; originally she ensured when a child’s milk-tooth fell out a new one grew back in its place. During the course of the fairy’s evolution it became important to place the tooth under the child’s pillow so she would leave money or a small gift in its place. Descriptions of the tooth fairy vary widely, from a small gossamer winged being to an adult-sized princess; it can be male or female, lean or chubby, young or old; no matter its appearance, children are willing to accept it without drawing suspicion.

The Vikings paid children for their milk teeth, believing it would bring good luck and protection in battle. This tradition of a tooth fee was recorded in the Eddas and has continued through history. In some countries, such as South Africa, there is a tooth mouse that collects the milk teeth that have fallen out, leaving a reward. In other countries, the tooth faery comes to collect the teeth. Children know to leave the fallen tooth under their pillow (or in their slipper) and the faery will come to collect it and leave a reward.

But between Vikings paying for teeth and mice and fairies doing the same, superstitions made children burn their baby teeth before witches could get hold of it and thus have power over them or to ensure they didn’t have hardship in the afterlife.

The tooth faery can come in many forms. Usually female, usually with a puffy dress and a wand, with glittering wings and a benign smile. But some see the tooth faery as a motherly figure. Others see it as male.

No matter how you see the tooth faery – as a black-clad ninja or as Dwayne Johnson from the Tooth Fairy movie – this faery helps children come to terms with the change and loss of teeth and bring them understanding of dental care.

Beware a tooth fairy queen scorned in this, the third chapter book of Academy Award winner William Joyce’s The Guardians series. There’s a lot more to this tooth-swiping sprite than meets the eye!

When last we heard, the Guardians were resting easy with the knowledge that the children of Santoff Clausen were finally safe from Pitch’s dastardly plans.

But is it all a ruse, a scheme, a lull the evil Nightmare King has deviously concocted?

Whatever Pitch’s plans, what he doesn’t know is that there’s a new Guardian in town, and she’s not the type to forget old grudges. Actually, she’s not the type to forget anything–because this Guardian is none other than Toothiana, the Tooth Fairy herself. She’s fierce and fast and crossing her will lead to a multitude of troubles. And, it turns out that, well, all those teeth she has been collecting? They contain memories. The forgotten memories of childhood… including the memories of how to fly. Young Katherine is hopeful that these memories might help her to remember her parents. The Guardians hope they’ll offer even further protection from Pitch.

This book was also turned into a movie “Rise of the Guardians”.

Toothiana is the Tooth Fairy. She collects children’s baby teeth and leaves behind money as their gifts. She is the Guardian of Memories. She guards all the teeth she collects in her castle in Southeast Asia.

A bad deed on the part of a tough minor-league hockey player results in an unusual sentence: He must serve one week as a real-life tooth fairy.

Kids everywhere know and love the Tooth Fairy — and now they’ll get to see just how magical she truly is!

Ouch — Icy Jack Frost has a horrible toothache! When he decides that the only cure is stealing Brianna the Tooth Fairy’s magic, there’s no stopping him. Now Brianna can’t do her job, and losing teeth won’t be magical or fun anymore!

Kirsty’s loose tooth just fell out, and she and Rachel can’t wait for Brianna to visit. But Brianna doesn’t come to leave a treat under Kirsty’s pillow — she comes because she needs the girls’ help! Can they track down the missing magic for their new fairy friend? Or is Kirsty’s lost tooth a lost cause?

Find the magic objects in all three stories inside this Rainbow Magic Special Edition and help save the Tooth Fairy magic!

There all loads of books featuring a tooth fairy on Goodreads. Check it out.

Tooth Faeries in My Writing

Origin of the Fae: Tooth Faeries
They are dependent on the milk teeth of human children as much as the children need their magic to ensure the growth of their teeth.
Tooth Faeries cannot choose their own outfits: they wear whatever the Tooth Faery Princess wants them to.
They can flit between dimensions and prefer to do so when the walls between Realms are thin.
They are especially sensitive to iron.
They work with the tooth mice who are immune to iron, though there aren’t as many mice as fae.