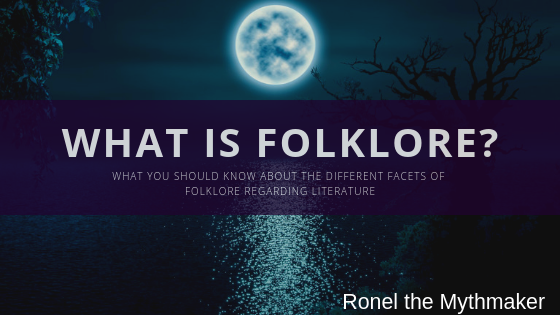 There are many ways to answer this question and to look at this topic. I’m going to take a go at it from a writer’s perspective.

According to the Collins English Dictionary:
Folklore n 1 the unwritten literature of a people as expressed in folk tales, proverbs, riddles, songs, etc. 2 the body of stories and legends attached to a particular place, group, activity, etc. 3 the anthropological discipline concerned with the study of folkloric materials

I love that description!

The Brothers’ Grimm had collected oral tales, wrote them down and published them as Grimm Folk/Fairy Tales. Thanks to their thirst for knowledge, people around the world were introduced to tales that would have stayed within the community they were found. The same with the Norse myths in the Poetic Edda, and Aesop’s fables.

Building on the description of what folklore is, let’s look at the different categories:

According to the Collins English Dictionary:
Folktale or folk story n a tale or legend originating among a people and typically becoming part of an oral tradition

The story does not have an identifiable original author (though the person who collects it in written form will usually be credited as the author – like the Brothers Grimm); the story is handed down from one generation to the next; it changes with each retelling according to the morals and warnings needed to be imparted at that time; it reflects the values and customs of the culture it comes from; it’s not connected to a specific person, time or place; the characters are ordinary people; the narrative is adapted to suit the age-range of the audience (meaning it can be told with a darker tone for older audiences).

According to the Collins English Dictionary:
Fable n 1 a short moral story, esp. one with animal characters

Anthropomorphic animals are usually the main characters (think Aesop’s Fables) and they have a clear message to share (the grass isn’t greener on the other side – The Country Mouse and the City Mouse).

According to the Collins English Dictionary:
Fairy tale or fairy story n 1 a story about fairies or other mythical or magical beings, esp. one of traditional origin told to children

They usually begin with “once upon a time”, making them play off in timeless settings; the main character triumphs over evil using magic (or aided by someone who can use magic); there are loads of magical beings and imaginary creatures; it turned from a spoken-only story for children to a literary genre in the late-seventeenth-century. (“Cinderella” and others fall into this category.)

According to the Collins English Dictionary:
Tall adj 3 informal exaggerated or incredible: a tall story

This is usually a wildly exaggerated story about a real or fictitious person who was the best cowboy/warrior/lion tamer/etc. that has ever existed.

According to the Collins English Dictionary:
Myth n 1 a a story about superhuman beings of an earlier age taken by preliterate society to be a true account, usually of how natural phenomena, social customs, etc. came into existence b another word for mythology

It usually deals with mythological beings (fairies, gods – esp. Norse, Greek, Roman, Egyptian, though others have fallen into this category in recent years) and creation stories (like how the Cailleach is responsible for various mountains and lakes in Gaelic folklore).

According to the Collins English Dictionary:
Legend n 1 a popular story handed down from earlier times whose truth has not been ascertained 2 a group of such stories: the Arthurian legend

They are set in the past; usually deal with heroes or kings doing deeds of valour; they may be based on real people and events; they may incorporate local legends about buried treasure and haunted houses. (Robin Hood and King Arthur fall into this category.)

Things that appear in folklore

A lot of places have folk tales connected to them. I like to look at them in my folklore posts. Like entrances to Faerie. You can stay up to date with them on my Origin of the Fae page.

There is a myriad of creatures that make an appearance in folklore. I blog about them on a regular basis. You can stay up to date with them on my Origin of the Fae page.

Here are a few that have been rewritten (with more original folklore texts as reference) and published on the new blog:

It can be argued that each time a new narrator tells the story of Little Red Riding Hood, it is a retelling.

But in fiction, real retellings keep the basic structure of the original tale, but adding their own twists. My favourite retelling of Little Red Riding Hood is Marissa Meyer’s Scarlet. (You can read my Goodreads review here.) You can still find the original tale deep within the story structure, but the characters have taken on a life of their own and created their own story.

I wrote about the importance of folklore in fiction for the 2018 A-Z Challenge.

As an author, I love dipping into all forms of folklore to inspire a story.

*This was originally written for the A-Z Challenge 2016. Changes and updates have been made to the original content.

Check out the new anthology inspired by myths:

What happens when gods wane, retire, or just decide they need a change of employment?

13 writers took up the challenge and let their imaginations run wild in this anthology that is nearly-always amusing, somewhat insightful, and completely irreverent as we imagine the gods of yore in retirement.

Pan by Vanessa Wells: Gwen Henson is a witch trainee with a nose for trouble; when she gets into something deeper than her mentor can help her with, they are forced to contact a cantankerous former god for help…help that he is willing to give, for a price.


A Low Key Game Night by Elizabeth Shaffer: Family Game night is always a risky situation when a former god of mischief is involved; add in a son bringing a new mortal girlfriend to meet the godly household and the stakes get a bit more interesting than anyone intended.

For Want of a Feather by Andrew Dunlop: When the God in charge of afterlife management goes AWOL, two intrepid (if somewhat dead) souls and a talking cat set off to find him. What they find isn’t exactly what they anticipated.

Out of Luck by Vanessa Finaighty: Loki, God of Mischief has a history of going too far: when one of his pranks goes wrong, he and the rest of Gods are out of luck…literally.

Rule 34 by Avery Vanderlyle: When the Primal Terror goes AWOL, Demeter is forced to chase him down in order to keep humanity from destroying themselves; unfortunately, he has a new hobby, and it’s for mature audiences only.

Immanent Domain by Wendy Smyer Yu: When Cara accidentally invokes Coyote after a terrible date, the young woman has to channel her inner trickster so that the bored deity doesn’t wreck her life.

God of Morning by Elizabeth McCleary: When Morrow, god of morning is informed he is in danger of losing his position to Chaos god of well…chaos, he has to pull himself out of his recent funk and find joy in the morning once more.

Zeus Really Needs To Go by Shawn Klimek: Lactose intolerance and a distinct lack of a statute of limitations combine to give the former King of Olympus one very bad day.

Breaking the Habit by Ronel Janse von Vuuren: Odin finds that escaping his throne to make mischief at a rest home might be exactly what the doctor ordered.

The New Chief Medical Officer by Tom Vetter: Controlled chaos reigns in the Elysian Fields Retirement facility. The new chief medical officer arrives to take charge; but when retired gods are involved, nothing is ever as easy as it seems at first glance.

Harbinger of Doom by Katharina Gerlach: A mortal with a distasteful job finds that he can be more than he ever dreamed, if he simply has the courage to reach out and take what he wants.

Whither Athena by Marshall J. Moore: In which Althea Stagg has a client she can’t refuse and a missing Goddess who has no intention of returning: caught between two primal beings, what’s a demi-goddess detective to do?

Playing Hooky by Juneta Key: Death’s FA can’t catch a break; the head reaper himsel has gone AWOL and someone placed an ad in the Paranormal Chronicles implying that the position was open! Now Alister has a waiting room full of deities who are demanding to interview for the position, a position he’s fairly certain can’t be filled by anyone except Death himself!

I wrote a story about Odin for this anthology. It’s a real hoot, if I have to say so myself. Go check it out.

4 thoughts on “What is Folklore? #folklore #amwriting”