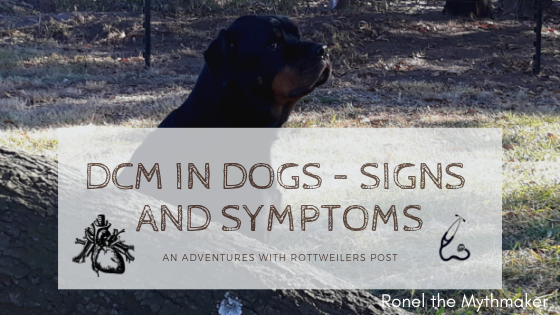 In July/August last year, I learned about an awful disease Rottweilers can get: DCM (Dilated Cardiomyopathy).

Tony suffered from it, along with Addison’s Disease (I will talk about this in a later post), and died from it.

According to the sources cited below as further reading, DCM is a disease of the heart muscle. It results in weakened and enlarged heart that doesn’t function properly (poor contractions and pumping ability). As the disease progresses, the heart chambers enlarge, one side usually more severely affected than the other, the valves start to leak and the lower chambers stop pumping blood properly into the lungs which leads to fluid accumulating in the lungs. Soon enough, this all leads to congestive heart failure (CHF).

Early in the disease, there may be no actual signs that your dog is ill, except, perhaps, your dog feeling meh about exercise. (Which also happens due to heat, other diseases and age.)

Before the major symptoms of DCM appear, your dog can get a clean bill of health because they appear to be fine. The following can help to detect the disease early, though.

As the disease progresses, the heart’s pumping ability worsens. Blood pressure increases in the veins behind the heart, fluid builds up in the lungs (also sometimes in the abdomen) and behind the left side of the heart, if the right side is also diseased there can be fluid build-up around the lungs.

Though it seems that the dog is rapidly dying, the underlying heart muscle abnormalities has taken months or years to develop to the point where you can notice the disease.

Most of the time, the cause of DCM in dogs are unclear. It does have a genetic component – being an inherited predisposition in certain breeds. And it can be the result of a toxin or infection. It usually happens (not as a secondary disease to toxins or infections) to dogs aged between four and ten years old.

For the most part, males are more susceptible to the disease than females.

It takes a lot of tests to be certain that it is DCM and not another disease.

This disease is not reversible and will progress.

In the asymptomatic phase (if you’re lucky enough to catch this disease early), medicines will be administered to improve the heart’s function and treat the symptoms of congestive heart failure/slow the progression of changes leading to heart failure.

As the disease progresses, more medicines will be added to improve the heart’s ability to pump blood effectively, diuretics to control the accumulation of fluid in the lungs, meds to help slow down rapid beating and enhance heart contraction. Eventually pain meds will be added, too. Dosages will increase over time.

Regular visits to the vet to check heart function (blood tests, EKGs, etc.) and to measure the progression of the disease.

You’ll have to monitor your dog’s overall health and attitude.

But, the prognosis isn’t good. Your vet will counsel you on the likelihood of your dog’s survival at the time of diagnosis. Usually they only have six to twenty-four months to live.

All you can do is make your dog’s life as comfortable as possible.

After Emmett’s death, Tony started getting ill in various ways. He got diarrhoea, his fur changed from black to light brown to white in places, he regularly vomited (usually because he swallowed a foreign object that had to come out), he became depressed and didn’t want to play as much as usual, he lost weight despite eating (so I changed his diet), he got loads of ear infections, and he started coughing.

I took him to the vet each time. The diarrhoea was stress-induced – the fur colour change, too. The vomiting was, just as I thought, because he decided to swallow the hooves I gave them when they became a certain size and it had to come out. The depression was because he lost his best friend – he and Cal weren’t as close as he and Emmett were and Cal doesn’t like to play. The weight loss was a dietary thing. The ear infections due to allergies. The coughing… It wasn’t disease-related (he didn’t have Spiro and it wasn’t because of allergies). But the coughing was barely-there.

Until one day he was lethargic to the point of not existing. He also lost control of his bladder that night.

He stayed at the vet for a couple of days for various tests. According to those tests, he only had Addison’s Disease – and a rare type, too. He came home, drank his meds, and seemed okay.

A specialist came in to do the echocardiograph. He had DCM. And he couldn’t be treated – the meds would interfere with his Addison’s meds.

He got weaker, rapidly, and a few days after his diagnosis of DCM, he was euthanised.

His DCM was secondary to his Addison’s Disease.

Knowing that this is mostly a genetic thing, I now only get my Rotties from reputable breeders who scan for all diseases in their lines and keep in touch with those they had sold puppies to (so they know the types of diseases that can arise from certain pairings).

I got Caitlin from De Liemers Rottweilers.

2 thoughts on “DCM in Dogs – Signs and Symptoms”