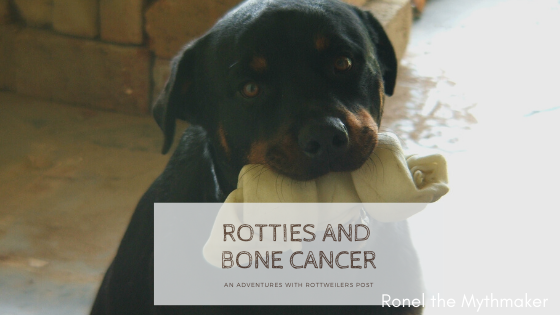 Cancer is one of those things that we don’t like to talk about — especially when it comes to our furbabies. Unfortunately, it is a fact of life.

What is Bone Cancer?

The primary bone tumour in dogs is osteosarcoma. (Primary means it starts in the bone.) This disease most commonly affects the limbs. Though any breed is susceptible, it is most commonly seen in large and giant breeds. It is an aggressive cancer that quickly spreads through the body. It also account for 85% of canine bone tumours.

This disease has subtle symptoms. It can include:

A lot of the symptoms above are connected to the pain the animal feels. The intermittent lameness responds to painkillers. Until a firm swelling in the bone presents itself at the site of the tumor which is most often painful, red and hot to the touch. As the disease progresses, it becomes more painful as the tumour grows and the bone is destroyed.

Your vet won’t jump to conclusions. They will take an X-ray of the affected limb after doing a physical exam. Sometimes they will take a full-body scan (X-ray, CT, whatever they believe necessary).

Problem areas identified on the scans will then be biopsied to obtain a definitive diagnosis. Anything from an infection to cancer can cause a swollen node in your dog’s leg.

Blood tests will also be done to determine your dog’s overall health and to help with staging the disease (see how far it has progressed).

Unfortunately, in over 90% of cases, the tumour will have metastasised through the body in microscopic cells that are difficult to see on the scans but the effects can be seen in the blood tests and in the physical exam. Most of the time, it spreads to the lungs first.

This is an extremely aggressive form of cancer and treatment is based on which stage it has progressed to by the time it is diagnosed.

Depending on how far the cancer has spread, surgery can be an option as well as chemotherapy and radiation.

Most of the time, with the disease already spread through the body, home care is recommended with a combination of prescribed drugs to deal with the pain and inflammation.

Treatment focuses on alleviating the associated and severe bone pain, and slowing down the disease (if possible) to extend the dog’s quantity and quality of life.

Even with surgery and chemotherapy, the prognosis is dire.

If all the extreme measures are taken, the dog will have twelve months at most. Though there are those who live much longer, they are the exception to the rule.

Palliative care gives the dog up to three months.

They always succumb to their disease or infections caused by the disease’s influence on the body.

Rottweilers, especially males, are at greater risk for osteosarcoma than other breeds.

For the Cherished Blog Fest 2017, I wrote about Emmett and how much he loved swimming. Even as he died of cancer…

Rottweilers are these brave creatures that hide pain remarkably well. They have to be really ill for them to start showing any symptoms.

One evening, Emmett went out for a run after a hailstorm. When he came back, he was limping. We assumed he had hurt himself in the slippery ice. The limping went away after a couple of days. And then it returned and he whimpered. Arnica gel applied to the sore joint provided relief. The limping and whimpering went away. It returned. And went away. This continued for two weeks. He seemed better when he was swimming most of the day. And then we woke up one morning and his leg was swollen. I knew what it meant. We went to the vet. The diagnosis confirmed what I already knew. It had already spread to his lungs and bowels. Two weeks later, it had also spread to his brain. He was euthanised to spare him any more pain.

*I don’t believe in pumping poison into someone without their consent. If you want to fight cancer by undergoing chemotherapy, that is your choice. But I won’t force an animal to suffer unnecessarily to make me feel better. Most vets agree with me.

Have you ever had to deal with bone cancer with your pets? What did you do?

Sign up for my newsletter and receive a free ebook. I won’t share your information and I’ll only email you once a month with updates on new releases, special offers, and a bit of news. You can see more of my Rottweilers on Instagram and sometimes in my newsletter.

4 thoughts on “Rotties and Cancer #Rottweilers”