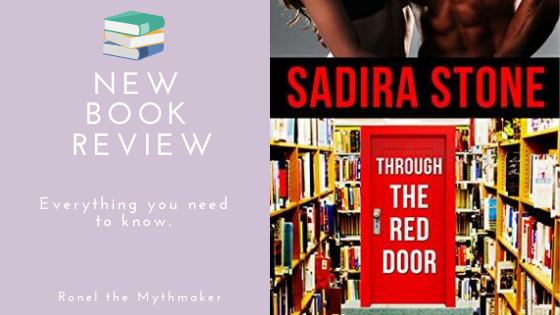 I shared a review of the second book in the Book Nirvana series a while back and thought that I should share the first book in the series by Sadira Stone with you this month.

Clara Martelli clings to Book Nirvana, the Oregon bookshop she and her late husband Jared built together. When rising rents and corporate competition threaten its survival, her best hope is their extensive erotica collection, locked behind a red door. In dreams and signs, her dead husband tells her it’s time to open that door and move on. When a dark and handsome stranger’s powerful magnetism jolts her back to life and he wants a look at the treasures of that secret room, she can’t help but want to show him more.

Professor Nick Papadopoulos is looking for historical erotica. Book Nirvana’s collection surpasses his wildest dreams, and so does its lovely owner. A widower, he understands Clara’s battle with guilt, but their searing chemistry is too strong to resist. Besides, he will only be in town for two weeks, not long enough for her to see beyond the scandal that haunts his past.

Of course, I wanted to know what inspired the author to write the book.

Until last year, I was one of those readers–you know, literary snobs who look down their noses at romance for the usual stupid reasons: too corny, too predictable, too fluffy. After finishing another (as yet unpublished) mystery manuscript, I read a few online articles about how fun and lucrative writing erotica can be. I thought, what the heck? Let’s try.

I have never had so much fun with a writing project! It nearly wrote itself, though it damned sure didn’t edit itself. And now, my first contemporary romance Through the Red Door is coming out from The Wild Rose Press on November 14th! I’ve totally immersed myself in the world of romance, gobbling books like popcorn, filling my ears with romance podcasts, and joining the Romance Writers of America. I find this genre excellent psychic self-defense against the current political poop-storm. At least in these stories someone will have a happy ending.

I love stories in which a couple’s powerful physical attraction leads them to consider a partner outside their usual M.O.—one who just might turn out to be their perfect match. That’s how it happened for my husband and me, and my romance fiction contains that element.

I sort of pulled the setting out of a hat. I live in Washington State, and wanted to set my series in a college town. I’ve heard that Eugene, Oregon is a great one with a lively arts scene and a continuing counterculture legacy from the hippie era. After touring the city via online research, correspondence, and Google Earth, I finally made the trip. Eugene is even lovelier than I’d imagined. Kate Rock, a resident author, kindly shared her knowledge of the city’s history and the flavor of the different neighborhoods. I look forward to many return trips.

An engaging read. If you want to know the plot – check out the blurb, all the important things are there.

I liked that it was about a woman who had already lived a full life, yet wasn’t ready to give up on love just because she became a widow.

Very steamy from the start…

And the books! The way the bookstore is described just makes one want to go and live there.

I love this line “…taking a chance on me. For listening to your heart instead of your fear.”

A well-written romance by Sadira Stone.

*Oh, I received an ARC from the author in exchange for an honest review.

Looks good, right? Go and get your copy of this fun series.

4 thoughts on “Book Review: Through the Red Door by @SadiraStone #bookreview #romance”