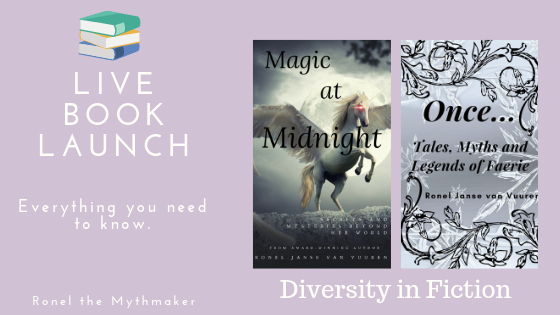 I’m so happy to share with you the first speech from my book launch on the 1st of June 2019. If you want to see the full video of the launch, go here.

So, to set the scene:

After everyone had their fill of the delicious food outside with the beautiful scenery, they went inside where the book launch and speeches were to be held. This song played as they entered:

Then the MCs did their announcements and this song played before my speech:

Then my Diversity in Fiction speech (see transcript below):

Transcript of Diversity in Fiction speech:

Sure, I can go for therapy for my fear – not that it will change anything, I’ll still fear the dark because I know what lurks there. I can go for a simple surgery and get rid of my glasses, but I’ll still have the issue I was born with.

I’m sure that you have your own issues, things that you want to change about yourself, things you want to hide from the world – because others fear what they don’t understand. And fear leads people to do horrible things.

The best way to take away fear is to bring understanding. And how do we do that? By educating people. There are great organisations out there – and you can join them – like the #HeForShe movement. #HeForShe helps combat gender stereotypes, child marriage and other gender inequalities through innovative, inclusive community involvement of people of all gender identities. The goal is gender equality in our lifetime. Emma Watson as UN Women Global Goodwill Ambassador had the right idea when she launched this in 2014.

Yes, it’s great to talk to people and help them to understand how their language affects people. It’s great to write stirring articles. It’s also great to volunteer to help others and carry awareness posters. It’s awesome to watch movies and read books to educate yourself about the issues.

But if you want to make a lasting impression on someone: make them feel it.

That is where authors come in. Whether you support the #OwnVoices or #WeNeedDiverseBooks hashtag, the debate is clear: marginalised characters should be heard.

Yes, there is a further debate that if you are not from the marginalised groups you shouldn’t write for them. Meaning, as a cis-het white female author I shouldn’t have any people of colour in my novels or write about other gender identities. Which, in my honest opinion, is ridiculous. As long as you have done the right amount of research, wrote honestly, and had sensitivity readers go through it, your story is fine. It is your story.

I don’t write stereotypes or portray people of other groups in an offensive way. For the most part, I don’t even assign visual cues as to how a person looks – unless it is important to the story in some way. Which I don’t always tell the reader, anyway. *Grin*

People are people, no matter their race, religion or gender identity. Did you hear me? We all bleed red. We all love, hate, feel pain and joy.

And so do my characters.

Whether it is the Galno Laird Ian MacKeltar struggling to fit in with his own people because he has to fight against gender stereotypes (you will find him in “Once…” and other books dealing with the Galno) or Amy from my newest book “Magic at Midnight” learning that one can be attracted to men and women without being broken or have something wrong with you, my characters are as diverse and complicated as anyone in real life.

Books can change lives. I’m sure that you have read a book that changed something in you forever. How did that book do it? It made you feel.

If we have characters in our books that portray people from different races, religions and gender identities accurately – whatever that may mean for that specific author – lives can change.

It is important for us to see ourselves in books. The good and the bad. Knowing that someone else is going through what you are going through makes a world of difference.

It can make the bully realise why they are bullying – and can make them stop. It can help that girl who wants to be a boy realise that she isn’t alone or a freak – and maybe she won’t continue cutting herself to let out the pain.

And like I said earlier: it’s fear that leads people to do horrible things. So once the fear is gone…*shrugs*

We cannot force people to listen. On my invitation for tonight’s event, I had to tell people that I will be talking about diversity in books. You can’t imagine how many people – people I really like – declined the invitation because of that. Why? Because they just don’t get it. They believe that being bisexual is a choice, that being transgender or gay or any of the other letters in LGBTQ is a choice. Like anyone would choose to be judged, bullied and otherwise ostracised for their gender identity. *shakes head*

*sighs* I have a dear friend who refuses to post his picture online for fear of being bullied, hated, ostracised. Why? Because it happens to him in real life. He has been beaten up more times than he will admit. Why? Because of the colour of his skin.

The worst part: he lives in a supposed first world country that boasts of their tolerance and freedom. And they say South Africans are savages… *shakes head*

My wonderful audience tonight are from every side of the spectrum. Age, race, religion, gender identity… not that I was rude enough to ask.

Mm. Don’t ask, don’t tell. It is the motto many live by. It was the culture I lived in as a teenager. You know, but you don’t say anything. Or even the defend the person from ridicule, saying – wrongly – that they are just sporty/soft/whatever, dying a little on the inside for the lie. *looks down*

We take our cues on how to act from books and television.

So if our books are filled with tolerant, open-minded individuals, diversity in race, religion and gender identities, and where bullying isn’t tolerated – imagine the world we can live in.

The Books featured in the speech:

I hope you enjoyed the speech, songs, photos and the links to more information. I’ll share the next speech and more photos with you later in the month.