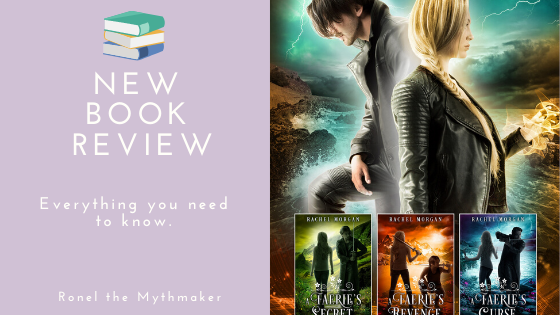 You know how much I love reading about faeries. I’ve already shared reviews about other books in the Creepy Hollow series. I got this series as ebooks and as paperbacks…

Calla Larkenwood wants nothing more than to be a guardian, but her overprotective mother has never allowed it. When circumstances change and Calla finally gets to join a Guild, she discovers guardian trainee life isn’t all she hoped it would be. Her classmates are distant, her mentor hates her, and keeping her Griffin Ability a secret is harder than she thought. Then an initiation game goes wrong, landing Calla with a magical ability she can’t control. She needs help—and the only way she can get it is by bargaining with the guy who just discovered her biggest secret.

The fight scenes are awesome.

One knew from the start that there’s something odd about Chase.

I’m not sure if I trust Calla’s new friends – the act a bit odd.

Vi and Ryn are having a baby! I do wonder about Vi’s new job Underground and Ryn moving up in the Guild…

And the twist with Calla’s mum! It explains a lot. I wonder what was so horrible, and probably personal, that she wouldn’t share it with the Guild.

As for Amon, there’s something very off about him (which we already knew and was only underscored here).

Calla has so much against her – even a mentor who doesn’t believe she belongs in the Guardian Training Program – but she perseveres.

And the final scene…! Seems Calla has questionable taste in men.

Still reeling from a shocking revelation, guardian trainee Calla Larkenwood finds the threads of her world unraveling further when she’s accused of a horrifying crime she didn’t commit: A deadly magical disease has entered the Guild, threatening to wipe out every guardian—and someone is intent on framing Calla for it. With the Guild Council focusing their investigation on her instead of searching for the real criminal, Calla watches her dream of becoming a guardian rapidly slipping away. Time is running out, and as the lines between good and bad, right and wrong, begin to blur, whom can she turn to for help?

Calla’s friends are odd, but they seem to be good for her. I do wonder about Ned, though. And her mentor has a serious axe to grind!

I knew, of course, who had set all the horrible things in motion for which Calla was framed but it was still fun to read and wonder and find out why they’d done it.

She still has horrible taste in men, but then, who doesn’t?

On the run from the Guild of Guardians, Calla Larkenwood and her team of fellow outlaws plan a daring rescue operation into the Seelie Court itself. As if that isn’t enough to keep them busy, the power-hungry Princess Angelica has begun preparations for a horrifying prophesied spell that will forever change both the magic and non-magic realms.

When Calla is blindsided by an unspeakable tragedy before the rescue can be carried out, she struggles to remain focused on her mission. She believes she’s reached her lowest point—until a witch reveals the final blow: she has cursed Calla’s magic. With time running out, can Calla save the one she loves and stop the prophecy from being carried out before the curse claims her life?

One scene felt like Tora had died all over again – just worse.

The curse on Calla is exhausting just thinking of it. Brilliant plot device!

The witches are scary. I’m glad I’ve read Scarlett’s story before this – it makes her character a lot more interesting and some interactions a lot richer.

The scene at the Seelie Palace – priceless! Anjelica is truly off her rocker – wonder why no-one noticed it before?

Griffin Abilities and the Guild… there’s so much to say about that, but I think “fear makes people do awful and stupid things” sums it up.

The final battle is non-stop magic and action. I like the switch to Vi’s POV at the end, making Calla’s curse much more ominous.