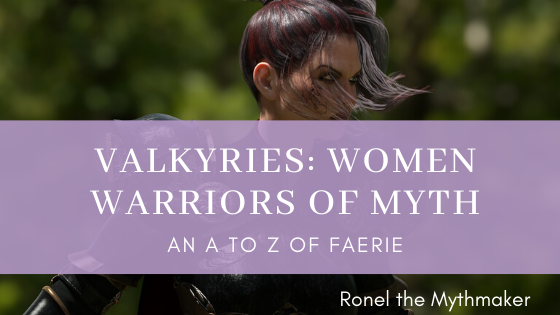 V is for Valkyries.

Valkyries are one of my favourite groups of women from ancient times.

The Children of Odin by Padraic Colum [1920]

AGAINST the time when the riders of Muspelheim, with the Giants and the evil powers of the Underworld, would bring on battle, Odin All-Father was preparing a host of defenders for Asgard. They were not of the Æsir nor of the Vanir; they were of the race of mortal men, heroes chosen from amongst the slain on fields of battle in Midgard.

To choose the heroes, and to give victory to those whom he willed to have victory, Odin had battle-maidens that went to the fields of war. Beautiful were those battle-maidens and fearless; wise were they also, for to them Odin showed the Runes of Wisdom. Valkyries, Choosers of the Slain, they were named.

And the Valkyries, the wise and fearless battle-maidens, went amongst them, filling up the drinking-horns with the heady mead.

Youngest of all the battle-maidens was Brynhild. Nevertheless, to her Odin All-Father had shown more of the Runes of Wisdom than he had shown to any of her sisters. And when the time came for Brynhild to journey down into Midgard he gave her a swan-feather dress such as he had given before to the three Valkyrie sisters–Alvit, Olrun, and Hladgrun.

31. On all sides saw I | Valkyries assemble,
Ready to ride | to the ranks of the gods;
Skuld bore the shield, | and Skogul rode next,
Guth, Hild, Gondul, | and Geirskogul.
Of Herjan’s maidens | the list have ye heard,
Valkyries ready | to ride o’er the earth.

THE SONG OF THE VALKYRIES Darraðarljóð

Widely is flung, warning of slaughter,
the weaver’s-beam’s-web: ’t is wet with blood;
is spread now, grey, the spear-thing before,
the woof-of-the-warriors which valkyries fill
with the red-warp-of-Randvér’s-banesman.

Is this web woven and wound of entrails,
and heavy weighted with heads of slain;
are blood-bespattered spears the treadles,
iron-bound the beams, the battens, arrows:
let us weave with our swords this web of victory!

(or Valkyrs) The nymphs of Valhalla, hall of the fallen battle heroes in Norse mythology. They travelled through the skies on horseback, holding their drawn swords aloft. In battle they selected the bravest Viking soldiers destined for death and took them to the afterlife hall of Valhalla to await Ragnarök – the great battle that would end the world. While the warriors awaited the final battle, the Valkyries waited upon them, serving them with mead and ale. They were also Odin’s messengers, and when they rode out on their errands, the flickering light of their armour lit up the skies as the aurora borealis, the northern lights. Venturing down to the earthly mortal realm, they disguised themselves as white swans to bathe in secluded lakes. Should they be seen by humans without their swan disguise, they became ordinary mortals and could never return to Valhalla. In modern culture Valkyries have been the subject of works of art, musical works, notably Richard Wagner’s opera Die Walküre, poetry, and video games.”

In Nordic and Teutonic mythology the Valkyries (choosers of the slain) were the nymphs of battle. These beings were always beautiful women and sometimes immortal. The attendants of the god Odin would don suits of armor and ride through the sky on powerful horses or as swan maidens to wherever battle was taking place. Then, hovering overhead the Valkyries would guide heroes throughout the combat; those who were selected to die or did so bravely would be given the kiss of death and then their soul would be taken to Valhalla by the Valkyries where they would be regaled as the newest member of the Einherjar, feasting with Odin and preparing to do battle at Ragnarok. Although they dressed for battle while on earth, wearing helmets, corsets, armor, and carried spears, the Valyries were not warriors. At Valhalla they wore white robes and attended to the Einherjar, typically keeping the tables full of food and their skull chalices filled with mead.

The concept of the Valkyries have changed over time; at first they were thought of as little more than carrion goddesses who would appear after a battle, collect the intestines of the dead and feed them to their pet wolves. When the Valkyrie appeared in the Prose Edda (circa 1220) it was as fierce spirits but later in the Volsungo Saga (late 13th century) they were given a more important role. At this point in time it was also believed a mortal princess could become a Valkyrie upon her death.

Valkyries are one of the few groups of women from ancient lore known to have power over the mortal realm. Mention is made in Old Norse literature of purely supernatural valkyries and of human valkyries with supernatural powers. They are blessed by Odin to find warriors to serve during Ragnarök. Eerily similar to the Norns, they decide the fate of those who fall in battle. Their name means “choosers of the slain”, which in ancient times even meant them using their magic to choose who lives and who dies, and not simply deciding who goes to Valhalla. As female spirits of carnage, they are much like the Celtic Morrígan.

In some cases they sat atop winged horses, armed with swords, protected by armour and helmets – in others they were true swan maidens, coming to earth in the form of swans. In yet others they descended to earth on the back of ethereal horses, clad in chainmail, helmets protecting their faces, spears at the ready and coated in the feathers of swans. Any way you look at it, they are fierce female warriors whose role is to determine the fate of fallen warriors – despite the fear of those on the battlefield. It is also said that they served the fallen warriors in the banquet hall of Valhalla.

Valkyrie is a fictional superheroine appearing in American comic books published by Marvel Comics. The character, based on the Norse mythological figure Brynhildr, was created by Roy Thomas and John Buscema. First appearing in The Avengers #83 (December 1970), Valkyrie became a mainstay of the superhero team known as the Defenders and a close ally and one-time love interest of the superhero Thor.

Valkyrie, also known by her Asgardian name Brunnhilde, was selected by Odin to lead his personal unit of shield-maidens, the Valkyrior. Renowned for her prowess in battle, Valkyrie is often accompanied by her winged horse Aragorn and carries the enchanted sword Dragonfang. In the 2010s, Valkyrie became a founding member of the Secret Avengers and co-leader of the Fearless Defenders with Misty Knight. Among Valkyrie’s other aliases are Barbara Norris, Samantha Parrington, Sian Bowen and Annabelle Riggs, who all, at one point, hosted her spirit. Samantha Parrington, one of Valkyrie’s previous hosts, later received superhuman powers and became a member of the Defenders herself.

Tessa Thompson portrays the character in the Marvel Cinematic Universe films Thor: Ragnarok (2017), Avengers: Endgame (2019), and will return in Thor: Love and Thunder (2022).

A Valkyrie is one of Odin‘s female hand maidens who choose slain heroes to bring to Valhalla and become einherjar. While in Valhalla the Valkyries serve the einherjar at meals, and consider it a great honor to do so.

Valkyries are capable of sprouting wings, allowing them the ability of flight, which Sam loved since she always dreamed of flying.

Samirah was known to have a swan cloak, which could be used to camouflage up to two people.

They also have wristbands on their arms which can be used to send a Valkyrie back directly to Valhalla in case the Valkyrie has become badly injured. The wristbands can be activated with the fingerprints of a Valkyrie that is still in the database.

Valkyries in My Writing

Origin of the Fae: Valkyries

Valkyries choose warriors to fight at the end of time – when good and evil will battle until only one side survives.
New Valkyries are chosen during battle the same way warriors are chosen for the final battle: some see it as a blessing while others see it as a curse. Warriors are treated like they’re something special, Valkyries have to work and serve until the end of time.
They train mercilessly. They are true warriors adept at all types of fighting.
There are different types of Valkyries: those who prefer to fight in ancient skirt armour, those who prefer medieval armour and others who like full-body leather outfits fitted with matching armour. All of them have their strengths and weaknesses – those who prefer leather aren’t all that into being subservient and are usually a lot stronger (mentally, physically, emotionally, magically) than the others.
They have a commander and they follow her orders to the letter – Valkyries aren’t supposed to have opinions of their own (which is why those who prefer leather – and have the strength that goes with it – are so rare).
Valkyries are all women. They were brave in their mortal lives and are even braver as immortals. They fight the Furies for possession of human souls to fight at the final battle (Ragnarok).

What do you think of the Valkyries? Where did you hear about them for the first time? Check out my Pinterest board dedicated to Valkyries.