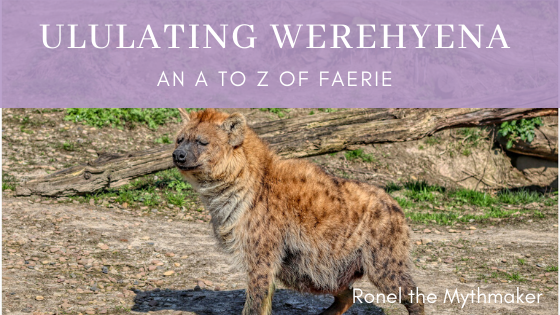 U is for Ululate.

ululate v howl or wail as an expression of strong emotion

Hyenas, those giggling beasts, freaked me out in The Lion King when I was just a little girl. I got over it. And then I learned of the Werehyena.

The Magicality of the Hyena: Beliefs and Practices in West and South Asia by JÜRGEN W. FREMBGEN

Whereas the striped hyena is, so to speak, a “silent species,” the African spotted hyena’s eerie cry has often reminded people of a howling and giggling laughter. The striped hyena moves alone or in small groups over a large territory and sleeps in natural caves or enlarged burrows dug by porcupines or wart hogs.

The “hyena” is depicted in African folklore as an abnormal and ambivalent animal: considered to be sly, brutish, necrophagous, dangerous, and the vilest of beasts, it further embodies physical power, excessivity, ugliness, stupidity, as well as sacredness.

J. David SAPIR reports that the Kujamaat Diola from Southern Senegal believe that witches ride on hyenas (1981, 531–33). Unfortunately, this author also does not differentiate between the spotted and the striped hyena species. At least in Tanzania people belief that witches ride only on the back of a spotted hyena (personal communication from Heribert Hofer, letter dated 21 March 1998). Witches use this wild animal “of the night,” as the Kujamaat call it, as a symbolic vehicle for metamorphosis.

In the transformative rituals of secret societies, such as the Korè cult of the Bamana (Mali), people “become” hyenas by using zoomorphic helmet masks and playing dramatic roles, both of which refer to the dirty habits, trickiness, and nastiness of the animal mentioned above; they may also be used to invoke fear among the participants (STRAUBE 1955, 2; ROBERTS 1995, 75–76).

In the oral literature of western Sudanic peoples (where the spotted as well as the striped hyena coexist!) a “half-man, half-hyena” creature is depicted as a monstrous and destructive man-eater who transmutes, usually in the middle of the night, and terrorizes people, especially lovers (CALAMEGRIAULE and LIGERS 1961).

Numerous tales of nightly encounters between humans and mystically powerful striped hyenas show the importance of the animal in the symbolic thought of Arabian Bedouins (BONEH 1987). Interestingly, a medical treatise written in Persian around AD 1376 in Delhi gives detailed prescriptions of a magical nature on how to deal with a man who can transform himself into a striped hyena (IVANOW 1926, 195). This demoniacal being, “half-man, half-hyena,” is called kaftar and has the habit of attacking and killing children.

However, the most characteristic views on the striped hyena relate to the use of its body. Already in antiquity it is well known that Greeks and Romans used the blood, excrements, rectum, genitalia, eyes, tongue, hair, skin, and fat, as well as the ash of different parts of the body, as effective means to ward off evil and to ensure love and fertility (STEMPLINGER 1948, 118–19; see also BAUMANN 1955, 59; EISENSTEIN 1991, 99). Also today, among Western Sudanic peoples the nose serves as a magical means to guarantee a good harvest and the tail to get a desired woman (CALAME-GRIAULE and LIGERS 1961, 107). Unfortunately, the authors do not mention if parts of the spotted hyena’s body are used or those of the striped hyena’s body. Similarly in West and South Asia, parts of the body of striped hyenas play an important role in love magic and in the making of amulets. From Iran, for example, it is mentioned that a kind of stone found in the body serves as a general means of protection for the one who wears it on his upper arm (MASSÉ 1938, 326).

In folklore from the northwestern African country of Sudan, the werehyena is often portrayed in a very negative light. The Sudanese werehyena is said to be a beast that prowls the night, hunting humans as prey. This version of the were-hyena supposedly has a particular taste for the flesh of young lovers, so during its nocturnal outings, it is most happy when it comes upon a pair of lovers and is able to tear them limb from limb.

The Sudanese were-hyenas, in human form, can still be identified by certain specific features. First of all, their skin remains abnormally hairy even when in their human forms. Also, the irises of their eyes is said to have a strange reddish tint (or their eyes are just red in general). Their voice is said to sound unusual, and legends frequently claim they sound nasally.

Along the lower western border of Sudan is the country of Ethiopia, which has its own beliefs about were-hyenas. According to Ethiopian lore, all blacksmiths are frequently believed to be were-hyenas. The occupation of blacksmith is almost exclusively a hereditary one in the culture of the Ethiopians.

Ethiopian blacksmiths were also believed to have shapeshifting abilities, which likely stemmed from the misconception that they had the power to change the shapes of objects.

Werehyenas are not the same as Werewolves. They aren’t men who turn into animals, but rather animals that turn into men.

The belief in werehyenas is rampant in Africa and parts of Eurasia.

In some parts of Africa, it is believed that entire villages are populated by werehyenas, people who change themselves into hyenas, such as Kabultiloa. In other places on the continent, only blacksmiths are suspected of having the power of turning themselves into hyenas and it is believed that they rob graves, probably to eat fresh corpses. Another version of the lore has it that a cannibalistic hyena terrorises lovers at midnight and can be recognised in its human form by being extremely hairy and having a nasal voice. Of course, there is also a cult that “become” hyenas through role-play, masks and other means while entertaining their group – supposedly to evoke fear and to help them avoid the hyena’s habits in their real lives.

In Persia and Greece, the werehyena is more vampiric in nature. It attacks at night, slaughters children, and haunts battlefields, drinking the blood of dying soldiers. And in Arabia it is known that the werehyena can mesmerise victims with its eyes and even with its pheromones.

Legend has it that the werehyena can take three forms: human, hyena, and a hybrid of the two. They can turn into any of the three forms at will. Just like real hyenas, the werehyena can act alone or work in packs. The werehyena has the gift to call a person’s name in a voice they know, luring people away from their friends and family in order to devour them.

*Although hyenas are depicted as monsters, scavengers and other harmful things, they are skilled hunters with only one enemy: humans. If you believe you need body parts to win love, luck and so forth, it’s just easier to adopt good hygiene or jump off a bridge than hunting innocent animals. To learn more about this beautiful creature, go here.

Moctar is a young boy who, although born in France, has grown up in Mali. At the age of eleven, he moves with his family to live in Paris. Moctar struggles to adjust to life in France, and is homesick for Africa. He begins to see visions of a hyena in the street. When he tells people, nobody believes him. He is laughed at by his schoolmates and sent to the school psychologist. He meets a man in the street called Paulo who helps Moctar to understand his visions

Roving clans of shape-shifting human/hyena creatures prowl and hunt for human prey. They are hunted by one man seeking revenge for the death of his loved ones.

“The Pack” is the sixth episode of the first season of Buffy the Vampire Slayer. Xander and several other students are possessed by the spirit of a demonic breed of hyenas that wreak havoc on Sunnydale High School.

Though, obviously, they weren’t called werehyenas, they were clearly based upon werehyena folklore. It was a creepy, well-written episode.

Origin of the Fae: Werehyenas

Two kinds.
The first kind is hyenas that can turn into men. They have Vampiric tendencies. They can mimic any voice. They are physically more powerful than any creature. They can mesmerise people to do their bidding. In their human guise they are quite hairy, have glowing eyes and they grin all the time.
The second kind is a curse that turn men into hyenas that can walk like men, fight like hyenas and are as bloodthirsty as Vampires. They are immune to the magic of most Fae.
Mortal enemies:
Type 1: Druids and Nature Fae.
Type 2: Only the sangoma that cursed them can kill them. (And return them to their un-cursed state.)

sangoma n (in southern Africa) a traditional healer or diviner

Aren’t Werehyenas terrifying? What are your thoughts on this creature? Where did you hear about the werehyena for the first time? Check out my Pinterest board dedicated to this creature.