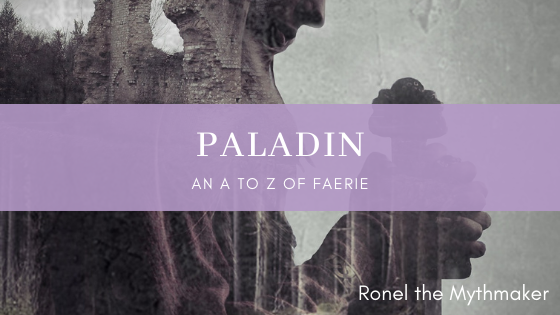 P is for Paladin

Knights in shining armour are always fun to read about. Add some magic…

Legends and Romances of Spain By Lewis Spence, [1920]

The rise of a caste of itinerary poets in France supplied the popular demand for story-telling, and the trouvères of the twelfth century recognized in the glorious era of Charlemagne a fitting and abundant source of heroic fiction such as would appeal to medieval audiences. The poems, or rather epics, which they based upon the history of the Carlovingian period were known as chansons de gestes, ‘songs of the deeds’ of the great Frankish emperor and his invincible paladins, or, to the trouvères themselves, as matière de France, as the Arthurian tales were designated matière de Bretagne, and those based upon classical history matière de Rome.

The Golden Verses of Pythagoras, by Fabre d’Olivet, [1917]

However that may be, it is to the allegorical history of Charlemagne, to that of his twelve paladins, called peers of France…

The Fairy Mythology Illustrative of the Romance and Superstition of Various Countries by Thomas Keightley, [1870]

Romances of chivalry, it is well known, may be divided into three principal classes; those of Arthur and his Round Table, of Charlemagne and his Paladins, and those of Amadis and Palmerin, and their descendants and kindred. In the first, with the exception of Isaie le Triste, which appears to be a work of the fifteenth century, the fairies appear but seldom; the second exhibits them in all their brilliancy and power; in the third, which all belong to the literature of Spain, the name at least does not occur, but the enchantress Urganda Ia Desconecida seems equal in power to La Dame du Lac, in the romance of Lancelot du Lac.

THE CARILLON TOWER OF GHENT, Belgium.

In the early Middle Ages, there grew up the trading town of Gent (Ghent), on the island formed by the junction of the Lys and Schelde rivers. The town hall and the belfry were the chief buildings in this old town. The belfry, or bell tower, was erected in the first part of the fourteenth century. The bells of the carillon, today, number fifty-two, the diameter of the largest bell being six and five-sixth feet, and that of the smallest about eight inches. The bell, Roland, is named in honor of the famous paladin, Roland, who fought under Charlemagne, and whose horn could be heard twenty miles.

For they, as thither they their course addrest,
Had vaunted to the maid in boasting vein,
No paladin or knight with lance in rest,
Against the worst his saddle could maintain.
To make them vail yet more their haughty crest,
And look upon the world with less disdain,
She tells them, by no paladin or peer
Were they unhorsed, but by a woman’s spear.

The Rosicrucians Their Rites and Mysteries by Hargrave Jennings, [1870]

The Paladins of Charlemagne were Twelve in number.

Like lapis lazuli, carnelian was one of the earliest favored gems. All over the world, ancient peoples used both these stones for jewelry, seals, and talismans due to their beautiful colors and easy working.
The warmer reddish carnelian, in contrast, became associated with kings. Carnelian symbolism also touches on health and luck. Perhaps due to its blood-like color, healers often prescribed wearing it as a general invigorator for the blood.
The stone’s rich, warm color often links it to projective, proactive energies associated with lions and fire. Traditionally, the stone lends courage to those in need.

Twelve fictional knights from the eighth century, the paladins of Charlemagne’s court are similar to the Knights of the Round Table. Though stuck in legend, there are always twelve of them, they are usually on some holy mission, have fantastic powers (such as being combat healers) and feature a lot in operas from the sixteenth and seventeenth centuries.

During the early twentieth century, they have had magical powers bestowed on them. Some even have feathered wings (much like an angel’s, underscoring their holy missions). They are always the valiant defenders of the weak and are always chivalrous.

Whether you want to dig into the historical side of paladins or the medieval romanticism, they remain knights in shining armour.

In the DC comics, there’s a character: Paladin (Prime Earth):

The Paladin of Titan Hawk was descended from a long line of paladins, the original being an ally of the legendary Titan Hawk.
Each generation of paladins was tasked with guarding a key that could open a doorway and release a god from a dark dimension. His mace shattered, the paladin was overpowered by an evil reincarnation of Hawkman known as Sky Tyrant. Defeated and dejected by his failure, the key was taken from the protection of the Paladin.

Learn more about the Paladin in DC comics here.

Paladins are warriors, similar to the Specialists.
The Paladins’ uniforms are mostly based on red and on the middle of their chests contains a yellow colored gem. However, there have been other types of uniforms as well. They have been different colors, patterns with feathers, gloves and capes. Some with or without gems, if gems are present it is shown be circular and matching one of the colors of their uniforms.
Like the Specialists, they have the capabilities of wielding a weapon. However, unlike the Specialists, their weapons have a certain element that is associated with it. For example, when given a choice of weaponry, Thoren chose a hammer and he utilizes it by smashing the hammer onto the ground creating cracks on the earth.

Learn more about the Paladins here.

Professor Avalon is a Paladin who teaches at Alfea. His class of Magic-philosophy is a mix of technical magic and philosophy. Before coming to Alfea, he used to teach at the prestigious Malacoy Paladion Academy.
He has large, glowing, golden-white wings. Avalon wears a short, pale yellow and gold, loose over the shoulder jacket, fitted blue long sleeves and pants. He wears long white boots and a light blue vest with two dark blue swirls. A long, gold and pale yellow cloth hangs from the middle, lower portion if his body and small cape from the back starting from the waist. His wrists have a gold and red forearm bracelet that tuck his sleeves.

I used my trusty friend Google to find books featuring Paladins. Here’s what I got:

The Paladins Series by David Dalglish.

Join Darius and Jerico, faithful paladins of opposing deities, as they struggle against monsters invading from the Vile Wedge, a civil war in the North, and a growing unrest fed by prophets and madmen that would tear apart the land for their insidious goals.

The Elenium Series by David Eddings.

Now for the first time in one thrilling volume-the three magical novels that make up David Eddings’s epic fantasy The Elenium.

In an ancient kingdom, the legacy of one royal family hangs in the balance, and the fate of a queen–and her empire–lies on the shoulders of one knight.

Sparhawk, Knight and Queen’s Champion, has returned to Elenia after ten years of exile, only to find young Queen Ehlana trapped in a crystalline cocoon. The enchantments of the sorceress Sephrenia have kept the queen alive-but the spell is fading. In the meantime, Elenia is ruled by a prince regent, the puppet of the tyrannical Annias, who vows to seize power over all the land.

Now Sparhawk must find the legendary Bhelliom, a sapphire that holds the key to Ehlana’s cure. Sparhawk and his companions will face monstrous foes and evil creatures on their journey, but even greater dangers lie in wait: for dark legions will stop at nothing to reach the radiant stone, which may possess powers too deadly for any mortal to bear.

The Paladin by C.J. Cherryh.

Now betrayed by the Emperor he once protected, master swordsman Saukendar leaves the way of the sword behind him forever–so he thinks. When a headstrong peasant girl burning to avenge her murdered family demands that he train her, Saukendar is faced with a momentous choice. Send Taizu away, never see her again–or join her and destroy the tyrant who has nearly destroyed them both.

But if you want a basic idea of what a paladin is and how to recognise them in your stories:

A paladin follows a code, fights to avenge those who cannot avenge themselves in the face of injustice or evil, does these things in a lawful (or at least orderly) manner, and has powers or influence that the normal man does not. In many ways, most TV protagonists are paladins.

As described by jdrakeh on EN World RPG news.

So going from that, we can say that Superman is a Paladin, and so is Buffy Summers (Buffy the Vampire Slayer). Most of my favourite TV heroes (Arrow, Batwoman, etc.) aren’t outright good in the true Paladin sense as they have many flaws and the “anti-hero” in their character arcs.

But in Arrowverse, when my favourites (and the rest) become Paragons, I believe they rival Paladins.

“Among the many misconceptions humanity holds dear is the fallacy that all beings are created equal. In truth, there are those who are greater. They are called heroes. But even among heroes, there are different echelons. The highest belongs to those known as the paragons. And they are the only hope of all creation.“—Mar Novu on Paragons[src]
Paragons are a class of the multiverse‘s greatest heroes. The Monitor described them as seven beings of the purest will who would ultimately defeat the Anti-Monitor, which they eventually did.

Learn more about Paragons and the Arrowverse here.

Paladins in My Writing

Origin of the Fae: Paladin
They are knights in the mortal realm who use magic to protect their own. Though they do not care for fae much, they do align themselves with those they deem worthy allies in the fight against darkness.
Paladins are warriors of light. Sunlight gives them their power.

Where did you hear about paladins for the first time? What do you think of them? Any folklore about paladins you’d like to share? Check out my Pinterest board dedicated to the subject.