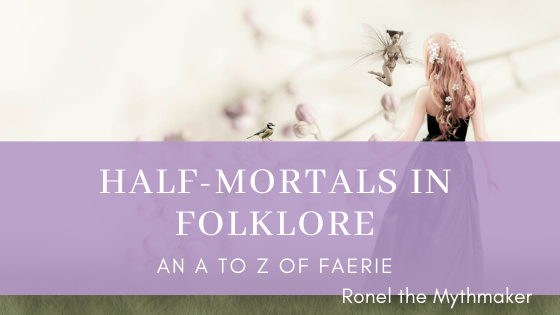 H is for Half-Mortal

We all know that Helen of Troy was supposedly so beautiful that her face was the one to launch a thousand ships. She was a demigod.

demigod n a being with partial or lesser divine status, such as a minor deity, the offspring of a god and a mortal, or a mortal raised to divine rank. “some Roman emperors claimed descent from demigods such as Hercules”

THE SECRET TEACHINGS OF ALL AGES by Manly P. Hall [1928, copyright not renewed]

Plutarch affirms that many ancient authors believed this goddess to be the daughter of Hermes; others held the opinion that she was the child of Prometheus. Both of these demigods were noted for their divine wisdom.

Maui is a demi god whose name should probably be pronounced Ma-u-i, i. e., Ma-oo-e. The meaning of the word is by no means clear. It may mean “to live,” “to subsist.” It may refer to beauty and strength, or it may have the idea of “the left hand” or “turning aside.” The word is recognized as belonging to remote Polynesian antiquity… The really long legends as told about the demi god Ma-u-i and his mother Hina number about twenty.

Female selkies did not seek mortal husbands but when they came ashore to dance by the light of the moon in human form, fishermen became enraptured by their beauty and hid their sealskins, preventing them from returning to the water., and taking them as their brides. The offspring of these unions were said to have webbed hands and feet.

Born of the union between the Salvanelli and a Strega (witch) the salbanelli are quarter-fairy beings from the folklore of northern Italy; they are considered to be fairy hybrids.

Born of the union between the Aguane and the Silvani, the Salvanelli were half-fay beings from the folklore of northern Italy.

Described as looking like winged wood-nymphs, they had a ghost-like appearance and dressed in animal furs and red clothing.

A type of female fairy found in the Austrian Alps in northern Italy near the Slovenia border; they live in the hills and the rivers and streams that cross them. These fay are said to be very beautiful. Expert shape-shifters, the aguane act as protectors of the mountain streams and rivers.

Breton folkloric figure. The courils were evil, or at least mischievous, fairies who congregated around ancient stone circles, especially those of Tresmalonen, where they enjoyed dancing all night. Should a human wander near them in the darkness, they captured him and kept him dancing until he died of exhaustion. Or, if the hapless wanderer was a young woman, they enjoyed her favors and left her pregnant with a half-fairy child.

The Element Encyclopedia of Witchcraft by Judika Illes

Tante Arie is the fairy-witch goddess of the Jura Mountains and Franche Comte. She spins Fate in her mountain sanctuary. Tante Arie is a goddess of spinning. Singing and spinning lure her from her caverns. Tante Arie manifests as a woman with goosefeet or as a snake. She rewards those who are industrious and protects pregnant and laboring women. She is sometimes represented as an old woman, half fairy, half witch, who comes down from a mountain on Christmas Eve, riding a donkey. A children’s legend suggests that Tante Arie invisibly shakes fruit trees so that the fruit falls for good children. She brings nuts and cakes at Yule time. Another legend suggests that Tante Arie brings gifts for good children but birch rods or dunce caps (witches hats) for the naughty ones.

Demigods are the offspring of one divine parent and one mortal parent. In Greek mythology, usually Zeus and a random beautiful human woman: think Hercules and Perseus.

These half-mortals always seem to get themselves into trouble and are then termed heroes after death. The Greek Perseus was sent to decapitate the Gorgon Medusa. The Greek demigod Theseus slew the Minotaur. Helen of Troy started the nine year Trojan war… Not sure how that makes her heroic, but okay. The Celtic Cú Chulainn single-handedly defended Ulster from the invading armies of queen Medb of Connacht. The Polynesian demigod Maui was said to be a mischievous soul who created fire, raised the sky so trees could grow tall and strong, and snared the sun to coerce it to move more slowly across the sky – his mischievous nature was his undoing, of course. And we all know how it ended for Achilles.

Demigods are superheroes in their own right. They have strength, speed, invulnerability, bravery, a need to better the world, and good looks.

As popular as it is to be half-magical being and half-mortal, it isn’t a surprise that it abounds in literature.

Maui, demigod of the sea and sky, is freed by Moana and together they save the world by returning the heart of Te Fiti.

Rick Riordan’s “Percy Jackson” series revolves around demigods (children of Roman/Greek gods and humans) who have to fight monsters to keep the world safe.

In this rendition of the legends surrounding King Arthur and Merlin, Arthur was born thanks to magic. Which makes him a kind of demigod, doesn’t it?

Meghan Chase is the daughter of the faery king Oberon and a human woman.

Before she was Wonder Woman, she was Diana, princess of the Amazons, trained to be an unconquerable warrior. Raised on a sheltered island paradise, when an American pilot crashes on their shores and tells of a massive conflict raging in the outside world, Diana leaves her home, convinced she can stop the threat. Fighting alongside man in a war to end all wars, Diana will discover her full powers…and her true destiny.​

Origin of the Fae: Half-Mortal
This term refers to anyone who has one fae parent, whether it be a seal with a Selkie parent or a human with a High Fae parent.
These halflings possess many of their fae parent’s gifts, but also their failings. Most importantly: they’ve inherited their mortality from their mortal parent. They might be faster, smarter, more attractive than their mortal counterparts, but they can still die the same way.
Halflings usually reside in the mortal realm as they are looked down on in Faerie. In the mortal realm, though, they are usually revered among the mortals and achieve cult status in whatever way they choose (beauty, brains, brawn – whatever they choose to pursue). Mortals will follow them to the ends of the Earth.

Have you encountered demigods/half-humans/etc. in stories? What are your thoughts about this phenomenon? Anything about demigods in folklore and literature you’d like to add? Check out my Pinterest board dedicated to the subject.