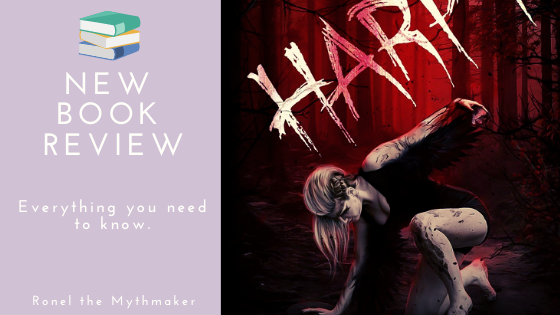 I have another book review for you! This one haunted me for a while and I’ve been unable to read as much as usual after it… maybe that’s a trigger warning in itself 😉

Charity Blake survived a nightmare.
Now she is one.

Punk-rock runaway Charity Blake becomes a Harpy at night—a treacherous mythical monster who preys upon men just like the ones who abused her. Struggling through an endless stream of crappy coffee shop jobs, revolted stares, and self-isolation during the day, Charity longs to turn into the beast at night. Doing the right thing in all the wrong ways suits her.
But a Harpy’s life belongs in Hell—the gruesome Wood of Suicides, where the Harpy queen offers Charity just what she’s looking for: a home where she can reign supreme and leave behind the agony of her past. The choice to stay in Hell would be easy, were it not for a rock-and-roll neighbor who loves her for the woman she is—even when he discovers the creature she becomes—and unexpected new friends with their own deranged pasts and desires who see Charity as their savior. But salvation isn’t in the cards for Charity. Not when her friends see through her vicious attitude and fall in love with her power as the Harpy.

Struggling between the life of an injured outcast and the grizzly champion of a blood-red hellscape, Charity must thwart her friends’ craving for her power enough to fear her corruption—and determine once and for all where her salvation lies: in eternal revenge or mortal love.

I heard about this book on Chuck Wendig’s blog. There was so much to like – read the post and you’ll see what I mean. So I ordered it from my local online store in print, I love paperbacks, and it languished on my TBR for a while. The gorgeous cover and blurb had me move it up a bit…

But… Reviews and the interview mentioned above had me thinking that this was a young adult dark fantasy novel. It’s not. The main character is twenty-three – which squarely puts her either in new adult or adult fiction. Seeing as the plot is about who she is, who she wants to be and what she has to do to get there, I’m classifying it as “New Adult”. Saying it is Dark Fantasy is a stretch: some things are added to the story to gross-out and shock readers. I’m classifying it as “Horror”.

I get that the character, Charity/Hazel, is angry, broken, tormented by her past, but the swearing and blasphemy got a bit much.

It took quite a while to get to the Harpy/Wood of Suicides aspect of the book, but it did read at a fast-paced speed even if you have to deal with various monsters sexually assaulting innocent girls/women while Charity as a Harpy hunts them down and eats them in the most gross ways.

The queen of the Harpies is a great antagonist. The Wood of Suicides is terrifying. The various Harpies with their distinct personalities make for a great background to the struggle within Charity.

I didn’t like Evan from the start. I did like Robbie, though. And Jen… some people can’t be helped – especially if they don’t want to be helped.

Charity/Hazel has a great character arc, lots of inner conflict, loads of external conflict, and she finally chooses to accept life and all the good it has to offer (no spoilers!).

Keegan is my favourite character.

I knew going in that this would be a tough read. I had hoped that the mythological aspect would be used to show what had happened to Charity through metaphors and what-not (the way it is done in Dark Fantasy), but the explicit details of what had happened to her as a child and what happened to her friends and those she saves as a Harpy made it a difficult read. I’ve read enough of those types of books in women’s fiction – stark reality should live there. I’m not shying away from the topic, but this book is so full of triggers for those who had been abused that there is no way for them to enjoy Charity’s vengeful Harpy-side before throwing the book aside and seeking out their psychiatrists. This book, in my opinion, is supposed to be a way for Charity to stop running from her past, own her decisions, and start healing from what had been done to her. And looking at the author’s note, it is supposed to do the same for readers.

A good book. Only read if you can stomach horror.

What do you think? Do you like the cover?

6 thoughts on “The Harpy by @HutchingsJulie #bookreview”