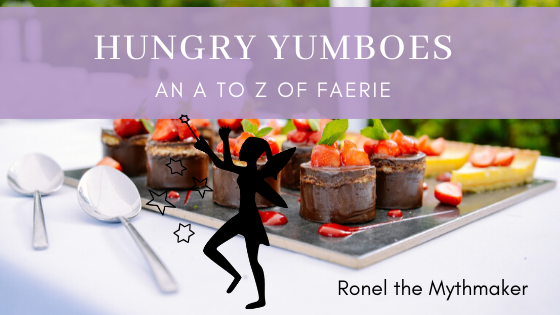 Faeries have been described as the Good People or the Good Neighbours in many cultures. In African Folklore, the Yumboes are known as the bakhna rakhna, “Good People”.

The Fairy Mythology Illustrative of the Romance and Superstition of Various Countries. by Thomas Keightley, [1870]

THE Jaloff inhabitants of the mainland of Africa, opposite the isle of Goree, believe in a species of beings who have a striking and surprising correspondence with the Gothic Fairies. They call them Yumboes, and describe them as being about two feet high, of a white colour, as every thing preternatural is in Africa. It is remarkable that, acting on the same principle as the Greeks, who called their Furies Eumenides, and the Scots and Irish, who style the Fairies Good Neighbours, or Good People, the Africans call the Yumboes, Bakhna Rakhna, or Good People. The dress of the Yumboes exactly corresponds with that of the natives, and they imitate their actions in every particular. They attach themselves to particular families; and whenever any of their members die, the Yumboes are heard to lament them, and to dance, upon their graves. The Moors believe the Yumboes to be the souls of their deceased friends.

The chief abode of the Yumboes is a subterraneous dwelling on the Paps, the hills about three miles distant from the coast. Here they dwell in great magnificence, and many wonderful stories are told of those persons, particularly Europeans, who have been received and entertained in the subterraneous residence of the Yumboes: of how they were placed at richly furnished tables; how nothing but hands and feet were to be seen, which laid and removed the various dishes; of the numerous stories the underground abode consisted of; the modes of passing from one to the other without stairs, etc., etc.

In the evening the Yumboes come down to the habitation of man, wrapped close in their pangs, [a] with only their eyes and nose visible. They steal to the huts, where the women are pounding in mortars the coos-coos, or corn, watch till the pounders are gone for sieves to searce the meal, and then slily creep to the mortars, take out the meal, and carry it off in their pangs, looking every moment behind them, to see if they are observed or pursued; or they put it into calabashes, and arranging themselves in a row, like the monkeys, convey it from hand to hand, till it is placed in safety.

They are also seen at night in their canoes, out fishing in the bay. They bring their fish to land, and, going to the fires kindled by the natives to keep away the wild beasts, they steal each as much fire as will roast his fish. They bury palm-wine, and when it becomes sour they drink of it till it intoxicates them, and then make a great noise, beating Jaloff drums on the hills. [b]

The Fairy Mythology Illustrative of the Romance and Superstition of Various Countries. by Thomas Keightley, [1870]

Loud from the hills the voice of riot comes,
Where Yumboes shout and beat their Jaloff drums.

In the folklore from the Republic of Senegal in western Africa in the Pap Mountain region comes the dark eyed, fair skinned, silver hair fairies known as the bachna rachna. Standing two to three-foot tall these good-natured fay were known to dance and feast on moon-lit nights, inviting humans to freely join them. According to the Jaloff people of Goree Island if the bachna rachna were low on the supplies they needed to make their feat they would steal what they needed.

On Goree Island, south of the Cape Verde Peninsula in Senegal, West Africa the white skinned, silver haired race of fairies known as the yumboes. Living underground in the hills located about three miles from the coast, each evening they dress in their pangs revealing only their eyes and sneak into the nearby villages. There the yumboes steal cuscus and cornmeal by putting it into their calabashes and arranging themselves into a row by which to pass their loot downward. Fond of fish yumboes will borrow canoes and take fire in order to cook their catch. Beating on their jaloff drums these little fairies, standing only about two-foot-tall will drink palm wine until they become intoxicated; they greatly enjoy dancing and feasting. Akin to the banshee of Ireland the yumboes will attach themselves to a particular family; when one of them dies the fairies are heard wailing and lamenting.

Originating in West Africa, yumboes closely resemble European faeries. They are also known as Bakhna Rakhna which means “good people”, which is another euphemism used for the fae in most countries.

Yumboes are believed to be the spirits of the dead. They are pearly-white in colour – just like most supernatural beings in Africa – with silver hair. They’re not very tall and live beneath hills. On moonlit nights, they come out to dance. They feast at long tables laden with food – mainly fish they caught themselves and corn stolen from humans. They are served at these feasts by invisible servants and they invite humans to dine with them.

We all know, though, that it’s a bad idea to eat with faeries – you might belong to them forever.

They don’t feature much in modern culture. They are on the Harry Potter Fandom Wiki, of course.

Yumboes are a kind of Africanhouse-elf native to Senegal. They are spiteful creatures, and tend to steal food from humans as revenge for crossing them. They also have intrinsic magical power, and can vanish at will.[1]

Learn more of them here.

Origin of the Fae: Yumboes

They are small, with deathly white skin and silver hair. They look sweet and kind.
They’re obsessed with food.
They don’t mind setting out elaborate feasts on long tables properly set with silver and fine china in the middle of forests. They even share their meals with travellers. Especially meals of plum wine, fish and corn.
They have invisible servants – these are guests who had overstayed their welcome and are now silently enslaved to them.
So be warned: do not eat with Faeries or you’ll belong to them.

Where did you hear about yumboes for the first time? What do you think of them? Any folklore about yumboes you’d like to share? Check out my Pinterest board dedicated to the subject.