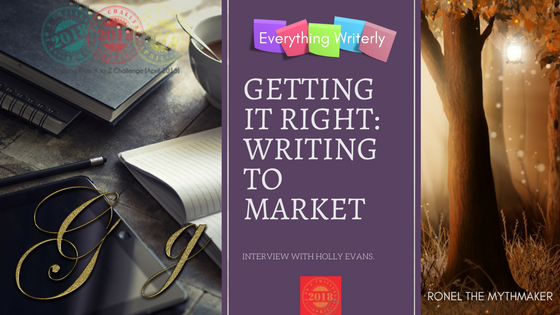 In my quest to find out everything I can about publishing, I decided to do an interview with Holly Evans who shares her publishing journey on her blog — inspiring me to explore self-publishing.

How would you define the genre of your books?

That depends on how specific you want to get. If I’m applying for a book promotion with a paid newsletter, then they’re Urban Fantasy. If I’m talking directly to potential readers then they’re LGBT+ Urban Fantasy with low romance. You can’t afford to get too specific when you’re applying for book promo’, but readers have specific tastes and it’s good to let them know up front what they’re getting.

Do you set out to write a specific character, or do they just appear to you?

They just appear in my head. I’ve tried to write something specific once or twice, but it never turned out quite right. They’ll quite often form from some kernel of a character somewhere. That could be an odd turn of phrase in a conversation, or the colour of a stranger’s eyes, or an interesting name I stumble across.

What has the reception been to your books?

The reception to each series has been very different. My Infernal Hunt series had a warm-ish reception. That was my first series, so people viewed it through that lens and were very sweet. That being said, people never really warmed to the protagonist Evelyn. She’s… not the most likeable protagonist.

My Ink Born series has been fantastically well received. I was really worried about people would feel about me writing a gay male protagonist, especially given he’s a reluctant hero, but people love Dacian. There have been a few people who wanted more romance in there, but you’ll never please everyone.

My Hidden Alchemy series on the other hand has received a luke-warm at best reception. I’ve had to cut that series short as people aren’t getting on with it. Those who do read book one to the end love it. Unfortunately a lot of people have an issue with the sub-genre of treasure-hunting Urban Fantasy. It’s very unusual to find treasure-hunting books in Urban Fantasy and the readers aren’t really there for it, or at least not for my brand of it. Then other readers don’t like the fact the protagonist’s bisexual. The hetero readers don’t like the lesbian sex scene and the lesbians don’t like the fact she gets together with a guy.

How has that changed the way you write/market?

I try to make sure my protagonists are far more likeable than Evelyn. Yes they’re flawed, but they don’t have her particular flaws. I’m also keeping my main plots much closer to the standard Urban Fantasy fare. The plots of my two new series is much closer to that of the Ink Born books, with the hero who saves the day, rather than anything treasure-hunting or otherwise non-standard for Urban Fantasy. I also have no plans to write another female bisexual protagonist, which is a shame as I’m a bisexual woman. My next two series will be a bisexual male lead, but he’ll end up with a guy (the Ink Born books follow a gay male lead), and a lesbian lead.

Is it easier or harder to tag your books with LGBTQ, knowing that it will draw in more readers while putting off others?

It’s definitely harder. Tagging my books that way drastically reduces the number of readers who’ll give them a shot. I feel it’s essential though, it’s better to have a small market that wants your book, than a larger market who will one star you for the LGBTQ element.

Do you feel that you write diverse characters?

I try. I have homosexual, bisexual, lesbian, and asexual characters in my Ink Born and Hidden Alchemy books. There are also some POC in there, but they’re not protagonists. Niko, the protagonist of my next series Forged In Blood is half Venezuelan and half Russian. Niko was raised in Edinburgh and then Prague though, and he was surrounded by people from those cultures. So I’m not still writing that culture, but that’s how I saw him in my head. To be honest I don’t have enough knowledge to write a POC in a main role, and as a white woman, I feel it’s better that I write the diversity I can do justice.

What do you wish other writers knew about writing diverse characters?

The biggest thing I think is to remember that diverse characters are still people. The comment I got again and again from gay guys who loved the Ink Born books was how refreshing it was to have a gay protagonist in a plot that didn’t centre of Dacian’s gayness. My best friend’s gay and I had a huge conversation with him about that, people seem to think of diversity as being this all-encompassing personality, or a box. The diversity is just one small facet of that whole character. Yes Dacian’s gay, but he’s also a quiet extrovert who loves whisky, action movies, and pepperoni pizza. His favourite thing in the world is wander by the river with Keirn. He’s a complete person.

I know that there’s a lot of confusion about #ownvoices. What does that mean to you as a writer? Especially in your genre.

Hidden Alchemy is #OwnVoices – I’m a bisexual woman, and so is Kaitlyn. So for me as a writer, it means writing about characters who’re like me, who share my marginalised experiences. There may be a day when I tackle my mental health #OwnVoices topics, depression and such. I think it’s important to try and write characters like us if we can (not everyone can, and there’s nothing wrong with that). We all want to see ourselves represented in media, and the best way to do that is to share our experiences.

In my genre, I think it’s difficult to make inroads with #OwnVoices books. There are certainly some Urban Fantasy books that do rather well with marginalised protagonists, S.M. Reine’s lesbian series was the first that came to mind. It isn’t #OwnVoices but having a lesbian character front and centre is unusual and worthy of note in my opinion. In general though, I think Urban Fantasy readers are used to a very specific type of protagonist and it’s going to take time to open that up.

What do you see for the future of your genre?

I see both Urban Fantasy and the sub-genre of LGBTQ Urban Fantasy as having huge potential. Urban Fantasy offers the step or half-step away from reality that opens up the possibility for interesting exploration with less fear. It can be difficult to write someone who is exactly like us, but making that person an elf living in a city that doesn’t exist in the real world suddenly it’s much easier. It gives us a place where we can make people like us heroes, they can have fantastical journeys and adventures. Those can then act as vehicles for learning and healing within our readers. Of course that’s true of any book, but I think the added element of magic and the idea that if we can just turn the right corner we’ll stumble into this amazing world, adds something.

I think we’re going to see a lot more progress and growth with the LGBTQ representation and hopefully other forms of marginalisation too. We’re in a time when people are looking for heroes, for hope, and strength, and Urban Fantasy is the perfect place to find it.

You’ve been quite open on your blog about your publishing journey. Is there anything you’d like to tell writers hoping to enter the market?

That depends on their goals. If they’re hoping to write Urban Fantasy to pay the bills then I recommend reading every bestselling Urban Fantasy you can lay your hands on, and learn the genre. There’s huge scope, but the readers like a specific tone and type of plot. If you want to make money then it’s important to know that and how to do it.

If they’re new to publishing in general then there’s a great deal to learn, and that can seem overwhelming and terrifying. Remember that success doesn’t happen overnight and you’re better to take your time, learn and enjoy the process. There’s no point in doing this if you don’t enjoy it. It’s a difficult, stressful, and heart-wrenching business, you’re going to need that passion to carry you through.

With Urban Fantasy specifically I’d also recommend brushing up on your myths and legends, and look into potential for new forms of magic. My Ink Born series has done well because people love the idea of tattoo magic. Tattoos are an ancient artform that has a fascinating place within society, add magic to that, and you have something people love. Dig into popular culture, ancient history, sociology, and everything else. Try and find something that makes your books, your magic, unique, while still sticking to reader expectations and desires. It’s even harder than it sounds

I recommend you dig out the SFF Marketing Podcast on YouTube, that is an absolute goldmine. I have a few posts that might help on the business/marketing end of things too:

If they’re writing for the sheer joy of it, then embrace that passion and enjoy every second of it.

Holly Evans is an urban fantasy author with an unhealthy fascination with blades, a deep love of hellhounds, and would love one day to wake up as a fae. When she isn’t wrangling rogue characters and trying to tame her muse, she’s researching shiny new ninja moves. During her spare time she fights crime and rights wrongs on the streets of County Kerry.

That answered a lot of my questions. Do you have any questions for Holly? Do you read #ownvoices books?