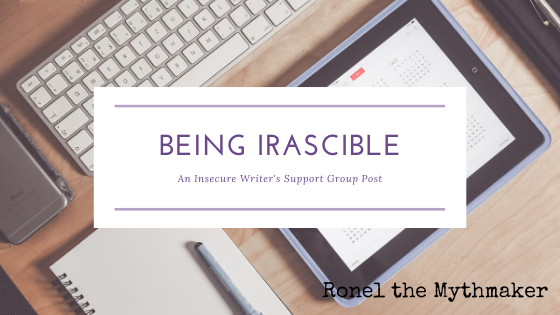 It’s a new month and time for another posting of the Insecure Writer’s Support group.

I’ve been looking through my files and folders, bringing some order to the chaos. (Yeah, I know, I seem to be in constant chaos and creating some sort of order every now and then.)

So I found these scribbles for story ideas that doesn’t fit in with my current series or others I have planned. And then I found that some anthology contracts have expired, which means I have the rights back to the stories.

What about a new series?

Short stories do really, really well. So why not?

I had to look at my editorial calendar as a whole, looking at my other series and what I can realistically write, polish, have edited, etc. in a year. Which means this new series won’t be published every month as I originally hoped.

August, September and October every year will see a new book as from 2020. And as from 2021 new books will also appear in February, March and April.

That’s six books a year. Not bad when running a series.

This will be loads of fun to write – and to read! It will still play off in my Faerie world as a whole, but it will be a storyline all its own. (Much like I did with my Faery Tales series.)

I’ll need your help once again. If you feel like you have the time to read and review a short ebook (they’re around 5k per story), please sign up to be part of my Irascible Immortals Street Team. You don’t have to be part of each book’s launch, I’ll email you and you can decide if you want to read that month’s book.

Mythology, humour, irascible immortal entities who need to figure out how to be relevant in this new world of technology and unfailing belief in science – and did I mention the humour?

This is going to be so much fun!

The first book launches at the end of the month.

One immortal. An eternity of boredom.

Odin used to have it pretty good: whole nations worshipped him, named a day of the week after him, believed him to be wise.

These days, though, not even the pets of other immortals respect him.

And there is only one place to go when you have fewer tomorrows to look forward to: an old age home in Midgard.

Scroll up to buy now and join Odin as he finds new life and adventures in retirement.

This is the first book in the Irascible Immortals series.

What do you think of my new series? Will you be signing up for my street team for this series? Have you done something like this before? Any new projects you’d like to share?

12 thoughts on “Being Irascible #IWSG”