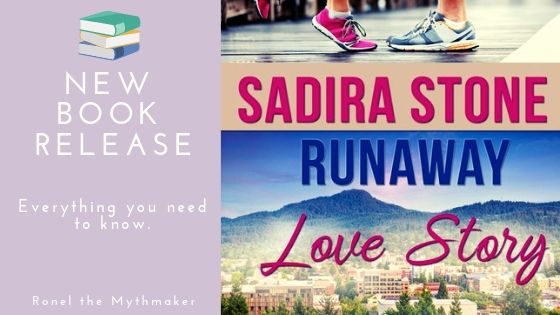 I’m so happy to say that blogging friend Sadira Stone’s newest romance releases today! Here’s everything you need to know.

She hates average…he’s as average as they come.

High school history teacher Doug Garvey is trying to enjoy his last few weeks of summer vacation, but receiving his final divorce decree hits him harder than expected. After a brief fling fizzles, he fears love just isn’t in the cards for him. If only he could find someone who’s real, someone interested in something beyond herself…maybe a new running partner who can keep up with his more carnal appetite. When sexy, straight-talking Laurel runs across his path, he dares to hope again.

He’s done with social-climbing posers…she’s ambitious and has big dreams.

Fired from an art gallery, Laurel Jepsen shelves her pursuit of an art career in San Francisco to help her beloved great aunt Maxie move into assisted living. While out on a morning run, she’s harassed by a group of teens until a tall, broad-shouldered hottie steps in, pretending to be her boyfriend with a kiss that makes her wish it were true. But she’s only passing through, not looking for a relationship.

Their fierce chemistry burns up the sheets—and the couch, the shower, the forest—but falling in love would ruin everything. Laurel can’t stay in Eugene, and he can’t leave. Doug’s only hope is to convince her the glittery life she’s after could blind her to the opportunities already in her path.

“Anyway, you’re too fit to be Ichabod Crane.”

“Aww, shucks, ma’am.” He slung his arm over her shoulder. She let him. Sweet.

Giddy, tickly hope built in his chest. He didn’t know much about Laurel yet, but he’d seen her kindness, her genuine connection with Maxie. She had a lot going on beneath her very pretty surface. Maybe this could be something. Maybe fate had finally tired of shitting on him and sent someone good across his path.

She wound her arm around his waist, hooked her forefinger through his beltloop and, hip to hip, they ambled around the block. The slow summer twilight hung around them like heavy deep-blue curtains. Beneath the streetlamps, swallows zoomed and fluttered in acrobatic loops.

Her lips parted in an expression of wonder as she followed the birds’ twilight dance. “So graceful. Don’t you wish you could fly like that?”

She turned those beautiful eyes on him. A smile flickered across her luscious mouth, an invitation. He closed the distance, brushed his lips across hers, soft and gentle. Her sigh mingled with his. For a long moment, they stood there, barely touching, relishing that first tentative taste.

His cock sprang to attention, throbbing almost painfully. Embarrassed, he shifted his hips away from hers. Don’t be a creep. Take it slow.

But Laurel had other ideas. Her breath hot on his cheek, she slid one hand to the small of his back, the other around his neck, and pressed her warm, yielding body to his.

He lost himself in her heat, took her mouth like a starving man devouring a succulent fruit. Ripe and sweet, she opened to his probing tongue. Satin softness welcomed him. Her low moan fired primitive need, deep in his gut. He released her mouth, grasped a handful of her hair, and pressed his open mouth to her throat. Her pulse fluttered beneath his tongue.

“Eew.” A childish squeal jarred him back to reality. “Kissing. Yuck.” Across the street, three little girls dropped their jump rope to point and giggle.

Laurel’s laughter bubbled like champagne. He rested his heated forehead against hers. Beautiful, delicious, and a good sport. Jackpot.

Finally, she stroked his chest and cocked her head to the side. “Well then.”

“Good to know.” She glanced at her watch. “We’d better get back. I don’t want to leave Maxie too long.”

“Hey, Laurel?” Those big gray eyes met his. He could get lost in there. “Should I apologize?”

The corners of her mouth twitched upward. “Nope.”

“Good to know.” Once again, he draped his arm over her shoulder, she slid her arm around his waist, and they started back the way they came. Crazy how perfectly their bodies fit together, so comfortable and easy. Her stride matched his as if moved by music only the two of them could hear.

Wow! This tender story – not to mention very steamy! – is a great read. I’m encouraged to take up running again… *Grin*. I love how the bookstore returned along with the small town and familiar cast from book 1. Maxie is, of course, my favourite character. Lots of tension, working out what dreams truly are, and great worldbuilding.

BTW, I received an ARC from the other and this is my honest opinion.

Another great book by Sadira Stone. I recommend this to everyone who loves romance, books, running and real-world relationships.

Ever since her first kiss, Sadira’s been spinning steamy tales in her head. But it wasn’t until her 50s that she tried her hand at writing one. Now she’s a happy citizen of Romancelandia, penning contemporary romance and cozy mysteries from her home in Washington State. When not writing, which is seldom, she explores the Pacific Northwest with her charming husband, enjoys the local music scene, plays guitar badly, and gobbles all the books.

Great, or what? Go get your copy now!