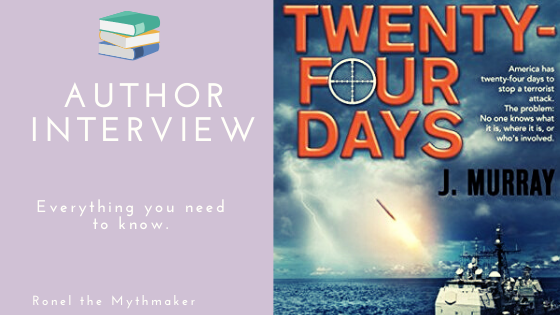 Doing interviews with other writers is always fun – I learn something new about them and their writing every time. I originally did this interview in June 2017 when Jacqui was still a thriller author (you’ll know from reviews on this blog that she now writes prehistoric fiction that I absolutely love).

A former SEAL, a brilliant scientist, a love-besotted nerd, and a quirky AI have twenty-four days to stop a terrorist attack. The problems: they don’t know what it is, where it is, or who’s involved.

In the latest Rowe-Delamagente thriller, the two unlikely partners have less than a month to stop a North Korean missile strike after hijackers steal nuclear warhead-armed submarines. If they don’t, the USS Bunker Hill, on a peaceful mission to observe a North Korean missile launch, will be in grave danger. Piece by piece, Rowe and Delamagente uncover a bizarre nexus between a man Rowe thought dead, a North Korean communications satellite America believes is weaponized, an ideologue that cares only about revenge, and the USS Bunker Hill (a Ticonderoga-class guided missile cruiser) tasked with supervising the satellite launch. As the deadline looms, they call on the unusual skills of a quirky AI named Otto with the unique ability to track anything with a digital trail.

Now that you’re curiosity is piqued let’s get to know the author behind this gripping thriller.

All those books that provide insight into how people overcome adversity, especially the impossible. Man constantly does that though we say we can’t. I’ve read so many books that chronicle in someone’s own words how that happens.

I actually wrote my antagonist by trying to see the world through his eyes. I read a lot of books and online blogs to see how my bad guys connected the dots (which probably put me on all sorts of lists for the Alphabet agencies). I came to respect them in their goals, if not their methods.

That would have to be Otto. I love building this fun, naive, sentient creature and figure out how to make him almost-human.

I learned a lot about Naval warfare in building the sea battle, the weapons available on America’s warships and those I can’t mention in print. There are very clever people out there.

My characters told me the ending. I had no idea how to tie everything together until they made it obvious. So, the quick answer to this question is: No.

Some days, I’d love to be Sandy, living a dog’s life of security, trust, being loved for just who you are with no judgements or expectations. What a life!

Yes! The prequel is To Hunt a Sub (the link takes you to Kindle). I’m working on the sequel which I plan to release Summer 2019. And, I have a spin-off on my ancient human, Lucy, working title Born in a Treacherous Time, due out next summer.

Probably a dog–or a wolf. I’ve often wanted to find my spirit animal.

Jacqui Murray is the author of the popular Building a Midshipman, the story of her daughter’s journey from high school to United States Naval Academy, and the thrillers, To Hunt a Suband  Twenty-four Days. She is also the author/editor of over a hundred books on integrating tech into education, adjunct professor of technology in education, webmaster for four blogs, an Amazon Vine Voice book reviewer,  a columnist for TeachHUB, monthly contributor to Today’s Author and a freelance journalist on tech ed topics. You can find her books at her publisher’s website, Structured Learning.

Now that you know a little more about the author, go ahead and read Twenty-four Days. There are lots of tech, plot twists and mysteries for you to admire and unravel. Any questions you’d like to ask Jacqui? Do you read thrillers?

“What sets this series apart from other thrillers is the edgy science used to build the drama, the creative thinking that unravels the deadly plot, and the Naval battle that relies on not just fire power but problem solving to outwit the enemy.”