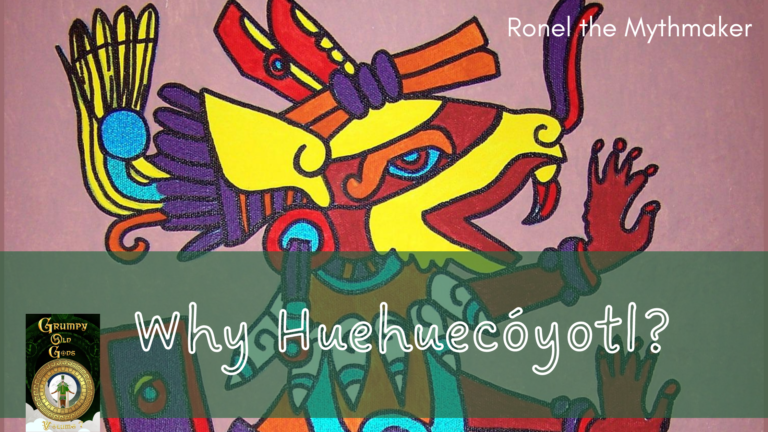 As part of my celebration of the release for the Grumpy Old Trickster Gods anthology, I have Katharina Gerlach over for a guest post about the folklore found in her story in the anthology.

A few points up front: this is not a scientific research paper. Also, some of the religious concepts were simplified (some even heavily) to keep this post from exploding into a full blown book on deities. And lastly, the overall text is very, very subjective.

The gods of most pantheons still known today aren’t particularly caring when it comes to humans. More often than not, they behave like spoiled children. Take the Greek gods as an example:

Some gods get women—human or goddesses—pregnant (mostly Zeus), leaving offspring and lover to the wrath of another god (his wife Hera never sought fault with him, only with the humans and half-gods). The gods punish people for speaking the truth (Sisyphus) and even turn the reward for choosing a beauty queen in a competition (Paris) into a punishment.

Their Creation Myth, like that in several other cultures, starts with a murder. Zeus and his siblings slay their own father Kronos, a Titan, to build the world from his body. Homer wrote nothing to suggest that there was a reason for the patricide other than Zeus and his siblings wanting to rule the lands. Later Myths tell of Kronos eating his own children and thus the need for killing him, but we all know that the winners write history, right?

Another example of imperfect gods are the Norse. Trickster Loki plays with all of Walhalla to the point where his children destroy the world during Ragnarög. Creatures from all parts of the world suffer from his tricks, and from the gods’ reactions to them.

The Norse world is threefold: Above [Asgard with Vanaheimr and Álfheimr (home to the gods, the Vana gods, and the Elves)], Center [Midgard (home to humans), Jötunheimr (home to giants), Utgard (home to more giants), Muspelheim (home to fire giants)] and Below [Niflhel (darkness and mist without inhabitants), Hel (home of the dead)], and humans are the weakest of the people living in those worlds.

However, in contrast to the Greek, the Norse gods do take care of humans. The ones they find worthy are taken to Valhal where they await Ragnarög, and they know that the only ones who will survive Ragnarög are a pair of humans.

One couldn’t get further from that with the Atzec gods. Even though they appear polytheistic at first glance, with a god or goddess for everything that the masses prayed to, the Aztec religious leaders believed them to be different aspects of the same god. In their view, one god was all, and all were one. They called this power Teotl.

As far as I could research, Teotl is a transcendent unity with all gods nothing but aspects of the flowing, ever changing power. The priests clearly understood the concept, but the masses were allowed to practice polytheism without understanding the true, unified nature of their Aztec gods. The demand of human blood showed how volatile the priests considered Teotl to be. Teotl was part of everything—every creature, every place, even air, fire, earth and water—thus Aztec prayers were probably aimed at balancing and soothing this ever present power.

What fascinated me most is the high price Aztecs willingly paid for the god’s goodwill. Despite the despicable gods, the Greek didn’t sacrifice other humans. Nor did the Norse gods require more than slaughtered animals, even though they did insist that a man who died in battle was worth more than one who survived to old age. Not so with the Aztecs. Although many Meso-American cultures sacrificed humans, only the Aztec and Maya embedded it in everyday life and believed it to be a necessity. These cultures also notably sacrificed elements of their own population to the gods. What we know about the Aztec’s amount of human sacrifices still sends shivers down our spines today.

With that in mind, I wrote my story “The Worst Trickster God of All”, focusing on Huehuecóyotl, a benign prankster. The name Huehuecóyotl means “very old coyote” and conveyed positive meanings to the Aztecs. Coyotes were symbols of astuteness, worldly wisdom, pragmatism, male beauty, and youthfulness. Although Huehuecóyotl often appears in stories as male, he can change gender. In most depictions, he is followed by a human drummer or groups of humans that appear to be friendly to him (as opposed to worshiping), which is exceptional in Mesoamerican culture.

Huehuecóyotl loved to play tricks on the other gods and on humans, but they often backfired, landing him in trouble. Although he shared many characteristics—like storytelling and choral singing—with the trickster Coyote of the North American tribes (who has a cameo in the story), he was a far more dualistic deity.

His dark side was just as bloodthirsty as that of the other gods, although he was considered a balanced god by the Aztec. He was the only friend of Xolotl (god of twins, sickness, and deformity) and accompanied the dead to Mictlan, the underworld of Aztec mythology. He is also the god of deception.

All these aspects came in handy when Coyote told me about an out-of-his-mind human that needed to be taken down. Who better to ask to cope with the situation than a shape-shifting deity from a bloodthirsty pantheon known for his compassion for children?

Katharina, commonly known as Cat, was raised in the middle of a forest in Germany where she and her three brothers roamed and dreamed. But even tomboys grown up, and therefore she got an education, programmed a forest growth simulator, and returned to the love of her life, her now-husband, with a rather useless PhD in science and the head filled with strange facts about our world.

When her best friend unearthed a box of historical documents about her family that reached as far back as the 15th century, Cat wrote two historical novels. During that time, her dream child landed in her little family, followed by two beloved foster children with special needs.

So she put aside all aspirations of ever working as a forester and focused on raising her children and writing the best books she’s capable of. By now she’s dabbled in several genres, mainly Fantasy (fairy tale retellings), SciFi, and Historical Stories.

I also find the news about the murdered girl … Some idiot reporter has
uploaded crime scene pictures that show nearly everything, and he hasn’t
even put a warning label with them. Every child accidentally stumbling
over his website will have nightmares for years to come. Humans can be
so inconsiderate.

The Worst Trickster God of All by Katharina Gerlach

What do you think of the Aztecs? Any questions for Katharina?