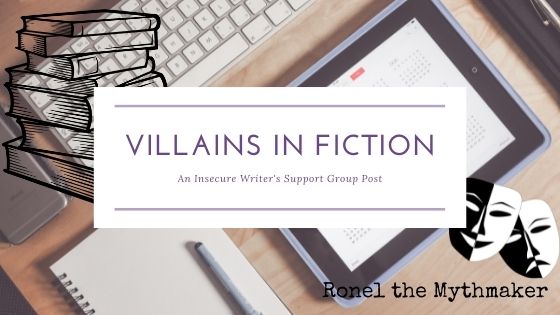 It’s the first Wednesday of the month and time for another posting of the Insecure Writer’s Support Group.

I’ve been reading a lot lately. I’ve been doing various readathons and what stood out to me is how villains are used. It also made me think of a post I wrote over a decade ago about villains (which is now getting a much-needed rewrite).

According to Roget’s thesaurus, “villain” is interchangeable with:

These are the synonyms, among others.

Looking at folk and fairy tales, Vladimir Propp concluded that a fairy tale only has eight dramatis personae (he did his analysis on Russian fairy tales, but it works on others just as well). One of these characters is the villain.

The villain usually does something here:

Though this does not always happen in every fairy tale, when it does, it is done by the villain. In loose terms, the wicked stepmother in Cinderella takes away the girl’s definition of family, they are in competition for the prince’s hand in marriage (she wants her daughters to marry him), and though she doesn’t chase the girl through the house before locking her up after she won the prince’s affections, it’s close enough. The sisters also act as the false hero (a villain who presents a false claim to being the hero) when they chop off parts of their feet to fit into the shoe.

The villain can also act as a guide. In the original Twelve Dancing Princesses, the girls were the villains that needed to be followed, observed and tattled on for their own good.

The villain can also dispatch the hero on a quest, something that really has to be done but by someone with real experience, and in this case the hero was sent just to be gotten rid of. I’m thinking of the Twelve Labours of Hercules and other quests from Greek mythology where the hero comes out on top, despite the obstacles.

When we write, we know that villains aren’t melodramatic, moustache-twirling, hand-rubbing, cackling sociopaths dreaming of ruling the world through their bad deeds in the name of evil. We know that fiction mirrors life (and vice versa). Villains, just like heroes, are driven by the conviction that their cause is just – even if the core driving him is greed, neuroses or something complicated from his past.

We talk about villains as if they are only men, but women make great villains, too.

But what makes a villain so necessary?

Villains can make or break a story. Every hero needs a bad guy to not only show their own heroic traits in contrast to villainous traits but also to push them to become better as they struggle against the villain. Heroes need obstacles. Villains create complex, interesting and down-right dangerous obstacles for the hero to overcome.

Sometimes the bad guy, isn’t a bad guy. Take Damon from The Vampire Diaries for instance. Just because Stefan thinks he’s the villain, everyone assumes that he’s a bad guy. But Damon has a whole history with his brother that no-one else is aware of. He has his reasons (motive!) to torture his brother in any way possible. He even does a little wish-fulfilment – he becomes the bad guy for a while because everyone wishes him to be. Oh, and he does so many things that the viewer wants to do that they identify more with him than with Stefan… Writing a convincing villain like that, the writer needs to do proper characterisation so the villain has motive for all of his wrong-doing and reason to be an adversary to the hero.

When we think villains, we automatically think the larger-than-life types found in comic books, movies and TV shows. So, here are my favourites:

So you created the greatest villain ever. Your villain is so awesome, people love to hate them. Your villain is so villainous they’re able to turn themselves into the MC’s ally (á la Malcolm Merlyn in Arrow and Katherine in The Vampire Diaries). Oh, you had so much fun writing your villains. Sometimes you’ve been confused as to who the villains and who the heroes are in your story. Your villain had won, disappeared and done other things to evade the hero only to continue their plotting and scheming.

But now it’s the end. How do you deal with your villain?

You’re absolutely infatuated and you allow them to win. Yes, it’s the end of the series and you’ve decided to let them win. Now, I get it. I’ve written villains that have been so charismatic that they’ve fooled me: is the hero or the villain-turned-ally the bad guy? You have to remember who the real hero is and stay true to your story.

You know who the good guys and who the bad guys are. Your villain was absolutely nasty and you’ve decided to kill them. It’s a popular choice. Readers want justice – think how happy you felt when Voldemort died in the last Harry Potter book. This makes a neat ending, with no loose ends. Unless your world has ghosts and other horrible ways for your villain to make a comeback…

Your villain had slowly, but surely, seen the error in their ways. Letting them win would only cause them to go into a suicidal spiral. Killing them would be as bad as running your car over the little old lady outside the grocery store (even though she’d continuously rammed you with her trolley earlier…). All you can do is to redeem them. But you can’t just snap your fingers and it’s done. It has to be part of the story (like in Megamind). Just like with everything else, the character has to have motivation for the change. And the reader has to see how this character is struggling not to do evil. This is a hard thing to set up properly. But if this villain is ready for it, then it could be spectacular.

Your villain is so awesome that no-one can kill her. She’s so badass there’s no redeeming her. And if she were to win, the world will burn. What now? Neutralise her. And not in the “kill her” sense. If she’s only a threat in battle/with magic, take away her powers (á la Avatar: The Last Airbender where the fire lord’s firebending was taken away). Though probably as twisted and evil as ever, this villain is no longer a threat. Or lock her up in a special prison where her powers cannot work and no-one can rescue her. The point is, the threat had been neutralised.

Okay, so sometimes calling them the antagonist is more apt. But saying villain is so much more fun.

I know I didn’t really talk about the books I’ve read, but you can always check them out in my review posts!

Any favourite villains? How do you deal with villains in your books?

The non-fiction selection was vetted by me and you can check out my review on Goodreads if you want to know what I liked about it.