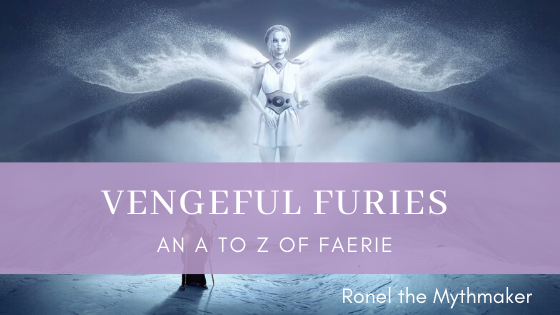 F is for Furies.

The Hymns of Orpheus, Translated by Thomas Taylor [1792]

The FUMIGATION from AROMATICS.

VOCIFEROUS Bacchanalian Furies, hear!
Ye, I invoke, dread pow’rs, whom all revere;
Nightly, profound, in secret who retire,
Tisiphone, Alecto, and Megara dire:
Deep in a cavern merg’d, involv’d in night, 5
Near where Styx flows impervious to the sight;
Ever attendant on mysterious rites,
Furious and fierce, whom Fate’s dread law delights;
Revenge and sorrows dire to you belong,
Hid in a savage veil, severe and strong, 10
Terrific virgins, who forever dwell
Endu’d with various forms, in deepest hell;
Aerial, and unseen by human kind,
And swiftly coursing, rapid as the mind.
In vain the Sun with wing’d refulgence bright, 15
In vain the Moon, far darting milder light,
Wisdom and Virtue may attempt in vain;
And pleasing, Art, our transport to obtain
Unless with these you readily conspire,
And far avert your all-destructive ire.

The boundless tribes of mortals you descry,
And justly rule with Right’s impartial eye.
Come, snaky-hair’d, Fates many-form’d, divine,
Suppress your rage, and to our rites incline.

The Furies of Greek mythology, three sisters named Alecto (“envy” or “never ending”), Megaera (“envious anger” or “slaughter”), and Tisiphone (“face of retaliation” or “rage”) are the opposite of the Muses who were associated with upholding cosmic order and proper behaviour; the Furies primary concern was with the retribution for the killing of family members. Linked with darkness, death, night and the Underworld, the Furies drink human blood rather than wine. Born the daughters of Gia and Uranus, they find the practice of human sacrifice reprehensible and will lash out their anger on those who practise it. Described as having a ghastly appearance, the Furies wear black robes, their eyes ooze and their breath reeks. When the Furies punished someone with obvious compassion they were called the Eumenides (“mild”).

The Forest in Folklore and Mythology by Alexander Porteous

The Furies were known as the Erinnyes, and on them devolved the bringing of light of secret crimes. There was a grove sacred to them at Kolónos, near Athens, and when Œdipus, who having in ignorance murdered his father and married his mother, became aware of having committed these crimes, he retired to this grove, and there, during a thunderstorm, his life terminated.”

Furies in a Nutshell by Ronel

The Furies, ancient spirits of justice and vengeance, are the daughters of Uranus (Sky) and either Gaia (Earth) or Nyx (Night), depending on the source. Their numbers are indeterminate, but Virgil recognised three: Alecto (“unceasing”), Megaera (“grudging”) and Tisiphone (“avenging murder”). It is well-established that their role is to keep order and punish those that break the rules (e.g. persecuting murderers, etc.).

Goddesses of vengeance, personified curses, ghosts of the murdered: no matter what they are, the Furies punish their victims by driving them mad. They carry torches, whips and cups of venom to accomplish punishment. And when not working in the Land of the Living, they torture damned souls in Hades.

The Furies aren’t evil: they only punish evil-doers, so innocent people have nothing to fear from them. Even when they appear as storm clouds or swarms of insects.

The Furies, also known as the Erinyes, are spirits of vengeance who serve the god Hades. They are his torturers in the Underworld and punish the crimes of the wicked. In Greek mythology, each Fury was sometimes represented as avenging a certain type of crime, such as crime, grudges, or murder. Ironically enough, they are often referred to as the Kindly Ones, in order to remain safe from them.

Alecto is disguised as Mrs. Dodds: a pre-algebra teacher at Yancy Academy. She dislikes Percy Jackson and always seems to prefer Nancy Bobofit, the class bully. It is later discovered that she was actually one of the Furies and thus not a human. On a field trip to the Metropolitan Museum of Art, Percy kills her with Riptide (Although he does not realize it is Riptide yet; he thinks that he hallucinated everything that happened, including Mr. Brunner throwing him the pen.) and the monster disintegrates into dust.

Percy later fights Alecto (along with the other two Furies) again while on a bus just as he is setting out on his quest, and wins with the help of Grover and Annabeth.

Furies in My Writing

Origin of the Fae: Furies

Furies are legion. They collect the souls of the fallen to do battle at the end of time.
They also punish the wicked, avenge the innocent and interfere in the lives of mortals and fae.
They wear clothes of ash, cinders falling in their wake. They have wings resembling that of bats.
Furies are excellent in battle. They can wield any weapon and can decimate their enemies in close-quarter combat (with or without weapons).
They live in the Underworld. They answer to Dagda, the Keeper of the Veil and Ankou – the King of the Dead. Like all creatures associated with Death, the rules of Faerie do not apply to them. They can be classified as deathfae.

What do you think about the Furies? Any other similar creatures in folklore that you know of? Check out my Pinterest board dedicated to The Furies.