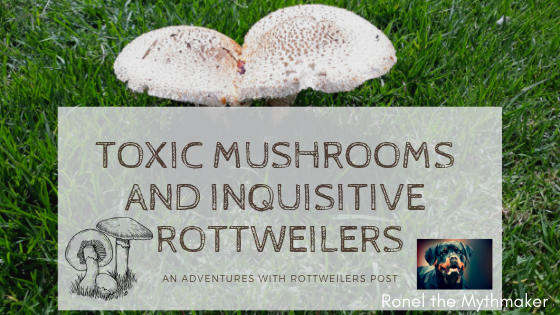 In February I got the shock of my life: Caitlin got poisoned by mushrooms.

She doesn’t leave the fairy rings alone. And though I respectfully remove them every morning, it seems that she can find them even when they’ve barely begun to grow. Now I go out twice a day to scan the lawn for any sign of mushrooms…

Let’s just start by saying this: ALL mushrooms are toxic to dogs in some degree. So don’t feed them your mushroom-covered pizza, no matter how big and sad those eyes look. (Onions, garlic, avocadoes and tomatoes are bad for them, too. I’ll do a post about what you can and cannot feed dogs in a later post.)

Signs and symptoms of poisoning

Some mushrooms cause abdominal pain. Your dog will have a curled back, like they’re tucking in their stomach. But that doesn’t mean it is all the mushrooms are attacking…

According to Pet MD and other sites, these are the most common symptoms associated with mushroom poisoning (the ones in bold are what Caitlin had at home, the ones in italics what she had at the vet’s):

With Caitlin, the lethargy set in first. I thought she was just tired (she had been up for five hours straight and she’s still a puppy). Then she started to arch her back while walking – which led me to believe that she was trying to scratch and walk at the same time (I’ve had dogs do that before). But I had dusted her with my special diatomaceous earth/karbadust mixture the previous day… so I realised that she had abdominal pain. I bathed her – picking her up and placing her in the hot water. By this time the lethargy had turned to weakness. After her bath, she threw up all the contents of her stomach and more. (No visible poisons – only her peanut butter sandwich, meds and yogurt from that morning along with lots and lots of mucus.) She was drooling, which I attributed to nausea and the abdominal pain. She fell down when she tried to walk. I immediately loaded her into the car and took her to the vet. I had to carry her. Thankfully, after a quick exam and consultation with a colleague, the diagnosis was confirmed: mushroom poisoning.

The onset of symptoms was quick: I noticed the arched back around 10 am and had her at the vet by noon. It was a neurological attack, according to the vet.

Despite quick intervention, she still got worse before she got better (she had seizures). She had to stay on a drip (fluids to flush out toxins, fluids to replenish lost electrolytes, antibiotics), she had to get scans to see if her kidney was fine (she had an abscess only the previous month and was on the last day of meds for that condition), blood tests and urine tests had to be run to see if her liver and kidneys weren’t shutting down, and she had to ingest activated charcoal with her food to bind and eliminate toxins. It was terrifying and horrific.

Early on Sunday morning she was well enough to return home. The nightmare lasted nearly 48 hours. It’s a good thing she vomited – it is always an excellent way to eliminate ingested toxins.

The prognosis is good: she’s back at home, being mischievous and eating activated charcoal three times a day with yogurt (she doesn’t like wet food). Had I been even an hour late in realising something was horribly wrong, she wouldn’t have made it.

Though Caitlin is now fine, I’m even more obsessed with keeping anything remotely harmful away from her.

If I had identified these mushrooms right, they are shaggy parasol mushrooms. Apparently they aren’t even all that toxic… But then, Caitlin did mess with pixies and as I said earlier: ALL mushrooms are toxic to dogs.