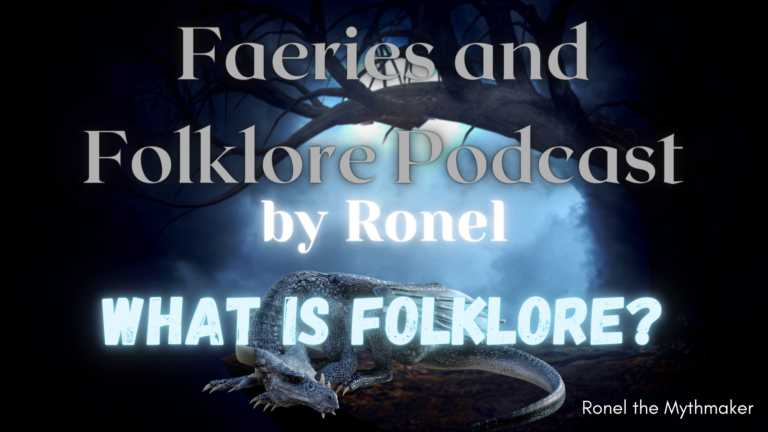 Episode 34: What is Folklore?

All about folklore from a writer’s perspective.

This week’s episode is a bit different. I’ve received several messages from listeners and from readers of my blog asking about what folklore is.

And I get it: there are different takes on this term on the web. So I decided to do this episode with the hope that when someone searches online for “folklore”, they will find this and understand the art and mystery behind it.

There are many ways to answer this question and to look at this topic. I’m going to take a go at it from a writer’s perspective.

Folklore n 1 the unwritten literature of a people as expressed in folk tales, proverbs, riddles, songs, etc. 2 the body of stories and legends attached to a particular place, group, activity, etc. 3 the anthropological discipline concerned with the study of folkloric materials

I love that description!

The Brothers’ Grimm had collected oral tales, wrote them down and published them as Grimm Folk/Fairy Tales. Thanks to their thirst for knowledge, people around the world were introduced to tales that would have stayed within the community they were found. The same with the Norse myths in the Poetic Edda, and Aesop’s fables.

Green Day has an awesome song, The Forgotten, about folklore. No, I’m not going to sing it, but here’s my favourite line: “Where in the world’s the Forgotten? They’re lost inside our memories… What we remember becomes folklore.”

Building on the description of what folklore is, let’s look at the different categories:

The story does not have an identifiable original author (though the person who collects it in written form will usually be credited as the author – like the Brothers Grimm); the story is handed down from one generation to the next; it changes with each retelling according to the morals and warnings needed to be imparted at that time; it reflects the values and customs of the culture it comes from; it’s not connected to a specific person, time or place; the characters are ordinary people; the narrative is adapted to suit the age-range of the audience (meaning it can be told with a darker tone for older audiences).

Anthropomorphic animals are usually the main characters (think Aesop’s Fables) and they have a clear message to share (the grass isn’t greener on the other side – The Country Mouse and the City Mouse).

Fairy tale or fairy story n 1 a story about fairies or other mythical or magical beings, esp. one of traditional origin told to children

They usually begin with “once upon a time”, making them play off in timeless settings; the main character triumphs over evil using magic (or aided by someone who can use magic); there are loads of magical beings and imaginary creatures; it turned from a spoken-only story for children to a literary genre in the late-seventeenth-century. (“Cinderella” and others fall into this category.)

This is usually a wildly exaggerated story about a real or fictitious person who was the best cowboy/warrior/lion tamer/etc. that has ever existed.

Myth n 1 a a story about superhuman beings of an earlier age taken by preliterate society to be a true account, usually of how natural phenomena, social customs, etc. came into existence b another word for mythology

It usually deals with mythological beings (fairies, gods – esp. Norse, Greek, Roman, Egyptian, though others have fallen into this category in recent years) and creation stories (like how the Cailleach is responsible for various mountains and lakes in Celtic folklore).

Legend n 1 a popular story handed down from earlier times whose truth has not been ascertained 2 a group of such stories: the Arthurian legend

They are set in the past; usually deal with heroes or kings doing deeds of valour; they may be based on real people and events; they may incorporate local legends about buried treasure and haunted houses. (Robin Hood and King Arthur fall into this category.)

Things that appear in folklore:

A lot of places have folk tales connected to them. I like to look at them in my folklore posts on my blog and here on the podcast. Like entrances to Faerie.

There is a myriad of creatures that make an appearance in folklore. I blog about them on a regular basis and they appear here on the podcast.

It can be argued that each time a new narrator tells the story of Little Red Riding Hood, it is a retelling.

But in fiction, real retellings keep the basic structure of the original tale, but adding their own twists. My favourite retelling of Little Red Riding Hood is Marissa Meyer’s Scarlet. You can still find the original tale deep within the story structure, but the characters have taken on a life of their own and created their own story.

As an author, I love dipping into all forms of folklore to inspire a story.

I have found many creatures/beings to write about from all over the globe in my fairy books, but some seem to still be part of living religions. I steer away from those because I’d rather not anger anyone on the basis of religion: my themes (especially the hot button issues) seem to take care of that already.

Folklore is important, even if we only embrace it in Disney movies and in Young Adult novels disguised as fairy tales, we learn where we belong in the world and we see the magic that is all around us.

I hope this has answered your questions.