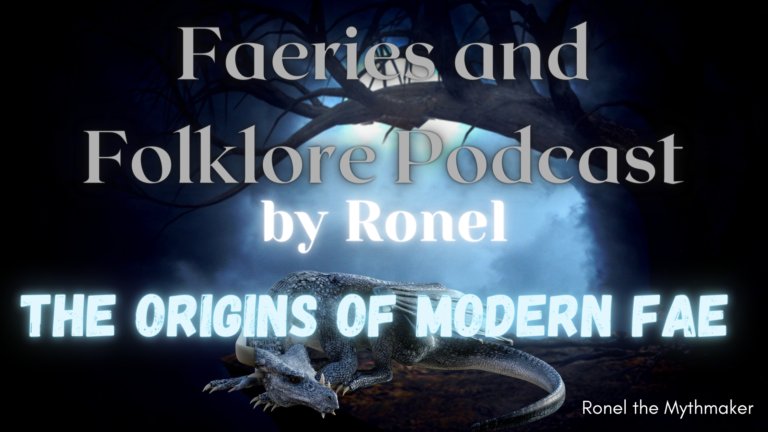 Episode 28: The Origins of Modern Fae

Answering popular questions about where faeries come from, how to repel them, how to lure them, and how they’ve evolved over time.

The Testimony of Tradition by David MacRitchie (1890)

The Fairy Mythology by Thomas Keightley (1828)

This week’s episode is a bit different. I’ve received several messages from listeners and from readers of my blog asking about where the fae came from, how they were treated pre-Christianity, ways to ward them off, and how to invite them to stay.

That’s a lot to cover, but I’ll try to keep it succinct.

And why? Because helpful brownies finished household tasks, boggarts delighted in upturning dishes and tormenting members of the household, will-o’-the-wisps led unwary travellers astray – especially into bogs – and kelpies pretending to be horses rushed into bodies of water with their foolish riders, devouring them. People wanted to know how to keep themselves safe and how to keep beneficial fae around.

Fairies have appeared in various guises throughout the world. The nymphs of Greece, the Sidhe of Ireland, the miengu of Africa, the Kitsune of Japan. They have taken on roles not just in fairy society, but also in human society. CS Burne described fairies in The Handbook of Folklore as beings between gods and men, not quite divine but not quite human either. They share the world with humans, mostly invisibly, and interact with the lives of humans.

The question, though, is where did the fae come from?

It is believed by some nineteenth-century folklorists and anthropologists that the tales of the fae are the result of pygmy people conquered by the ancestors of the modern British with iron weaponry. The clash of cultures resulted in tales of fantastical people who fled to the mountains and bogs, fearing iron.

Scottish folklorist David MacRitchie popularised this theory with his controversial book The Testimony of Tradition. In a later book he wrote, Fians, Fairies and Picts, he used his twist on archaeology – which was a fairly new science – to support his theory of ancient dwarf-like people. His argument was that the Fians, who preceded the Scots and Picts of Irish and Scottish history, were skilled in magic, music, medicine and masonry. They lived in hidden underground houses, later known as fairy forts, and that the fires from these hills were the supposed fairy lights leading people astray at night.

In WY Evans-Wentz’s The Fairy Faith in the Celtic Countries, there is strong evidence of a connection between fairies and the dead. In Ireland, fairies were the spirits of the departed, returned with wisdom. They were known as the Gentry. In Wales, the Tylwyth Teg, the Fair Folk, are ancestor spirits who are 2 metres tall. In Scotland, there was a distinction between the Slaugh and the Sith. The Sith are fairy beings who dwell in hollow hills in Scotland, while the Slaugh are the spirits of mortals who have died and are denied access to heaven until recompense is made for their earthly transgressions. Clearly they weren’t bad enough to go to hell.

As Christianity spread, local traditions and beliefs became intermingled with religious beliefs. The most obvious being Christmas celebrated at the same time as traditional Yule celebrations. It is no different with the fae. In Alexander Carmichael’s Carmina Gadelica, charms, incantations, prayers, poems, and songs gathered from the Scottish Highlands and Ireland show vividly that it is believed that fairies are fallen angels. The story goes that when Satan and his followers were cast out of heaven, more angels followed. Some landed on earth, in the mountains, oceans, woods, and skies, and they became fairies of these regions. They have to pay a tithe to hell every seven years for the freedom to live on earth.

There is a belief that the fae were once important deities, worshipped as nature gods and goddess in pagan times. With the spread of Christianity, these deities were tamed and diminished, relegated to the realms of folklore. The Tuatha de Danann of Ireland were the children of the goddess Don. They were otherworldly beings with great supernatural powers. They were conquered by the Milesians and took to the hollow hills, becoming the Sidh. As they battled and mated with the Fianna Finn, they decreased in stature and became the size of human children and much smaller until the idea settled that they were tiny beings, sometimes with wings.

Between finding the right name for them, some preferring to call them the good folk, the fair folk, the little people, or good neighbours, to attempting to categorise them as Thomas Keightley does in The Fairy Mythology, going as far as dividing them into “Fays and Fairies of Romance”, human-sized beings with mystical powers, and “Elves or Popular Fairies”, diminutive beings, things get rather muddled. Just remember that they are fickle supernatural beings.

Protecting yourself is as easy as keeping iron on you, ringing bells, turning your clothes inside out, jumping over running water if you are being pursued, wearing a cross (as Christianity had influenced the fae greatly, and it will work on demons, too), or keeping salt on you. I’ve done a post about iron which you can listen to.

If you want to connect with the fae, cleanliness is a must with household fae. Discretion is highly prized, as they don’t want everyone to know their business. Leaving a saucer of milk with freshly baked bread out for them is well-received and will call them to you.

There is much more to know about the fae and where they come from. Unfortunately, the only sources we have access to is that written in the nineteenth-century by folklorists influenced by their own culture as they gathered folktales, beliefs and traditions.

I hope this has answered your questions. Links in the show notes for places to read some of the sources cited.