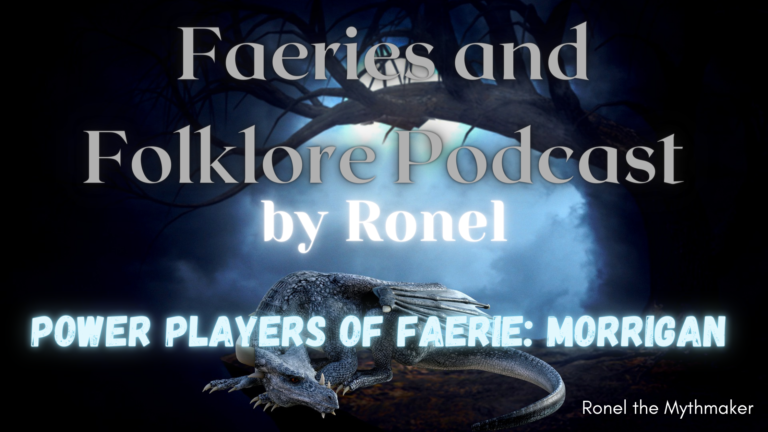 The folklore of the Morrigan in a nutshell and how I reimagined it for my writing..

Learn more about the Morrigan here.

We’re continuing our exploration of the power players of Faerie.

The Morrígan is a figure from Irish mythology, translated as “great queen”, “sea queen”, “terrifying queen” or “phantom queen”. She’s associated with war and fate, and can be seen encouraging warriors to do brave deeds during battle. She also brings fear and confusion to battles. At times she’s seen washing the bloodstained clothes of those fated to die – much like the Washer Woman (a type of banshee) from Scottish folklore.

The Morrígan is often depicted as a trio of sisters, usually Badb, Macha, and Nemain. It is believed, though, that these are all names for the same goddess, just her different aspects (e.g. when she foretells death and victory in battle, it is usually in the form of a crow, the Badb). She’s often considered a triple goddess, mostly because of the Celtic significance of Threeness, and because in the tales told of her, she turns into a lovely young maiden, a queen fit for battle, and an old crone.

She is seen as the guardian of Earth and its people – depending on her mood, depends on the clan protected. She’s a headstrong, passionate goddess who does as she pleases. She is also the wife of Dagda, the king of the Underworld. As shown in the tale of Morrígan and Cúchulainn, she’s adept at shape-shifting – and can be quite vengeful when scorned.

Some Celtic scholars have tried to link Morrígan with Morgan le Fay. We all know, though, that these are two separate women with their own agendas.

No matter what you want to call her, battle is her business and you’d better beware.

And now for my interpretation of the fae in an origin of the fae: Morrígan

The Crow Faery. The Raven Faery. War. The Triple Goddess. She goes by many names. And answers to no-one.

She has power over battles – turning cowards brave, striking fear into the hearts of the brave, making fights go the way she wants (and causing them at a whim).

Crows are drawn to her. They are carrion birds and are well-fed wherever she is.

She can turn into a flock of crows. She always wears black.

Once, Morrígan and Dagda were romantically involved.

Only Faery Dogs (Cù Sìth) can withstand her powers and neutralise its effects on others if need be.

During the time of the Rift, the Cù Sìth Alpha – Amber – bound Morrígan’s powers for stepping out of line and causing her mother’s death. She has been plotting her revenge ever since.