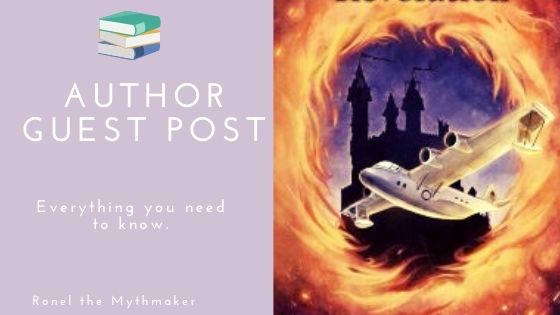 Author friend Jemima Pett’s Princelings series has come to a conclusion. I’ve asked her to tell us all about her experiences with writing this series.

Hi Ronel, and thanks for inviting me here today.

Yes, ten books of a ten book series, The Princelings of the East. It sounds amazing, and to be honest, I really admire anyone who goes for longer series than that. It’s hard to keep the plots coming!

It was only planned as a trilogy. I got the idea of these stories and gave them titles, and then wrote the books.

The idea came from a combination of chatting with friends and my adorable first guinea pigs, naturally named for Harry Potter characters—well, what would you call ginger-haired twins? The chat was a forum chat, and we were making up stories one post at a time.  Somebody (me) threw in a tunnel in the corner of the room, which they went down and ended up in a world that ran on strawberry juice (also my contribution).  That’s a summary of about two week’s posts!

I then thought it would be fun to write a story about the adventures of my Fred and George.  So I did.

I immersed myself in this world I’d built, but didn’t think much more of it. Posted them on my guinea pig blog, and that was that.

What would we do without friends?

I’m sure I’m not the only one who has been pushed by friends to publish.

They were certainly different. I’ve never managed to fit them into a genre.

I was reluctant, but eventually looked into it. I didn’t think they were good, although I enjoyed them, and I tried to make them as good as I could. I tried querying all the suitable UK agents, but with a fantasy world where the personalities are guinea pigs, I didn’t see much of a demand for them. About the only response I got from an agent was ‘not commercial enough for the current market.’ Well, I knew that.

But I was reading up on publishing, and attending fairs and seminars. Writers & Artists held one seminar in which self-publishing on Kindle featured strongly. That followed an article in a respectable newspaper (they were, then) about the rise of e-readers.

This sounded like an opportunity, to me. I’m pretty much a control freak anyway, so keeping control of my books sounded fine.

The seminar was at the end of October 2011. Bt the end of November, the Princelings of the East was published on Kindle.  By mid December I’d discovered Smashwords, and it was on Smashwords, iTunes, Kobo and Nook, too.

Stories that wouldn’t lie down

By May 2012, the first three were out there, and the book Hugo had asked me to write about him—since I’d made him the baddie in the first book—was in the pipeline.  He just had to set things straight from his own point of view. ‘Charming’ is the word most often attached to Hugo. He was, and he continued to haunt the series. I was persuaded to change from the original cover of book 4, though, as animal protagonists were still frowned upon.

Despite that, some of the descriptions in the books, while trying to make them human or guinea pig, are definitely better understood as the guinea pigs in my head! Think Ratty and Mole in Wind in the Willows.

I had to write more, featuring more of my guinea pigs, who are distressingly shortlived animals.  The characters in my books grow up faster than human children, but have much longer lives than guinea pigs.

By the time I’d featured Humphrey (such a sweet, gentle soul) and Victor (the comedy act in the trilogy, and definitely an unreliable narrator), I had an overall arc for the series.

Characters who write their own plots

The first thing I learnt about writing was that the characters do things you don’t expect.

In retrospect, this may be a sign that the characters are well rounded. The author does not control them. I was reading (hunting for more typos) my latest one, and I wondered how the conversation they were having had come about.  Did I think of that?  I think not.

Several times I had no idea how a particular plot point was going to work.

I could sit in front of a blank screen without any idea of what was going to happen—save they had to solve this problem, in this chapter.

They solved it on the page. One would say something, the other would drag something out of some pseudo-science, and someone else would have an idea, and away they went.

All I had to do was write it down. Character wrangling, perhaps?

If you want to see what I mean, I’ve done a piece on my blog today about it, with examples.

I did exert some control.  I got stuck on book 6 for a while (in fact it was supposed to be book 5) because of a technical issue involving the first book. Eventually I solved the problem, by making sure that certain people never met.

I also had some little series icons that I wanted to play a part in the last book: Fred’s gift when in need, of asking the castle for something, and it magically happen. And Willoughby’s silver whistle, which first appeared in book 5, demonstrated its powers in book 7, and got handed on to various other characters in book 8, was supposed to do something special in book 10.

My original idea was that it would play a part in the Revolution by making the castle defend itself, or something like that.

I’m sure you’re thinking ‘but hang on… Room of Requirement and the spell McGonagall gave in Deathly Hallows to wake up the statues.’

Yep. It had already been done. And when I got to the end of my first draft of Princelings Revolution, book 10, there was nothing for the whistle or the castle to do.

But I used them in smaller ways!

So what have I learned, in ten books?

Apart from listening to your characters?

What did I love most about writing the series?

Never losing the characters that I loved so well: George, Hugo, Victor and Fred on holiday.

Jemima Pett has been writing books since she was eight and designing fantasy islands at ten. Not seeing a career in fantasy island design, she went down the science route at school, and ended up in a business career, which was good for writing manuals and memos. Eventually she retrained and went into environmental research, where she could write articles and papers.  She started writing fiction because her guinea pigs told her to, and she’s been writing the story they inspired ever since. She also has a biography and a science fiction series to her name.

The final book of the Princelings series is Princelings Revolution, published on 1st October. The cover is by a professional illustrator, Dani English at Kanizo Art.

The planes are crashing, the people are angry at the changes and shortages. King Fred puts democracy to the test and finds it’s not all it’s cracked up to be.  There’s an organised anti-monarchy group called the Causists, and they are spreading false information which the people seem to believe. Things are bad—but they are going to get worse…

Will he even keep his head, let alone the promise made to Lord Mariusz at the start of the whole adventure?

Buy the paperback or ebook at Amazon iTunes, B&N, and Kobo.

Thanks, Jemima! Do you have any questions for her? Have you read any books in this series? Remember to sign up for the Rafflecopter giveaway!