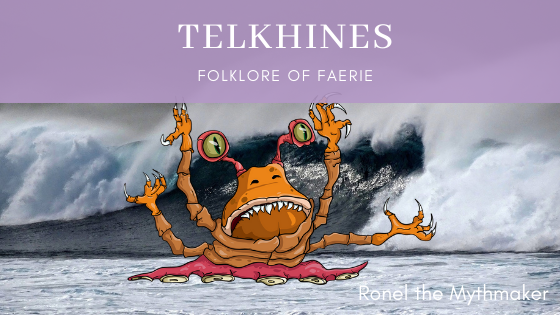 I first read about Telkhines in one of Rick Riordan’s books — I think it was one where Percy Jackson was the lead. Anyhow, here’s the folklore about these creatures from Greek mythology.

Moreover, the ancient theologians of the Greeks reckon up six demons, which they call Telchines, others Alastores; which bearing ill-will to men, take up water out of the river Styx with their hands, sprinkle it upon the earth, whence follow calamities, plagues, and famines.

Also we read of a certain people of Rhodes, called Telchines, who corrupted all things with their sight, wherefore Jupiter drowned them.

The traditions of Rhodes only supposed the Telchines, those of Crete Sasion, to have escaped the cataclysm.

“From the blood that flowed from the genitals [of Ouranos (Uranus) the Sky] three Erinyes (Furies) were born first in the earth, Teisephone (Tisiphone), Megaira (Megaera) and Alekto (Alecto) with them; and along with them the four famous Telkhines (Telchines), Aktaios (Actaeus), Megalesios, Ormenos and Lykos (Lycus), whom Bakkhylides (Bacchylides) calls the children of Nemesis and Tartaros [or perhaps Nemesis, daughter of Tartaros], but some others the children of Ge (Gaea, the Earth) and Pontos (the Sea).”

In the ancient texts of Greek mythology the telchines are described as the original inhabitants of the island of Rhodes, where they worked their sorcery through the art of metalsmithing, manufacturing magical weapons for the gods such as the trident with which Poseidon controlled the seas. In other tales they were punished for their life-destroying powers, portrayed as shapeshifting sea demons, and described as having fins instead of hands and the heads of dogs.

In the mythology of ancient Greece, the telchines (“sea children”) were the first inhabitants of the Isle of Rhodes. In the oldest myths the telchines were said to have been nine dog-headed enchantresses who had flippers for hands. They were believed to have founded Iaiysos, Kamros, and Lindos; created the sickle Cronus used to castrate Uranus. The telchines were the nurses to the god of the sea, Poseidon, and created his trident for him.

Spiteful Sea-Monsters resembling Merfolk in Greco-Roman mythology. They have thick bodies with flipper limbs and heads like dogs. Their gaze paralyzes anyone who angers them. Skilled in etallurgy, they forged the sickle with which Kronos castrated Ouranos, as well as the trident of Poseidon/Neptune. Originating in the Cycladic islands of Crete, Cyprus, and Rhodes, they were scattered throughout the seven seas after attempting to abduct Aphrodite.

The Element Encyclopedia of Magical Creatures by John and Caitlin Matthews

In the Graeco-Roman tradition, the Telchines are an ancient race of beings, responsible for the invention of metalworking. They were associated chiefly with the islands of Rhodes, Cyprus, Chos and Crete, though in the writings of Pausanius there is mention of Athena Telchine who was worshipped in Boetia. The magical skill of the Telchines caused them to be accused of sorcery and the blighting of crops with their sulphur and foul water. Hence their reputation became that of a spiteful, jealous race of gnomes that Zeus scattered through the world after they attempted to kidnap Aphrodite. Some accounts describe them as like men, but with thick, flipper-like arms and legs, while in others their heads resemble those of dogs and their eyes hypnotize anyone who angered them. They were responsible, among other things, for forging the Trident of Poseidon and the sickle with which Cronos castrated Uranus.

In Greek mythology, Telkhines are older than the pantheon as they were the metalsmiths who made the scythe with which Kronos castrated his father Ouranos, they raised Poseidon and made his trident, and they also apparently had a thing for Aphrodite as they kidnapped her at some point.

The Telkhines originally lived on the island of Rhodes and used their brand of sorcery to imbue the artefacts they made with magic – which is why Poseidon’s trident and Kronos’s scythe are so powerful and lasted so long.

Before the catastrophe period – more commonly known as the great flood – the Telkhines were the original gods of Rhodes, linked to Atlantis, and the sea. They even had Kapheira, daughter of Oceanus, to aid them in the upbringing of Poseidon once Rhea entrusted her baby to them. There is even some speculation that Kapheira was a Telkhine herself, linking these creatures to Oceanus.

Besides being fantastic metalsmiths, artists and magicians, they could also affect the weather, bringing about snow, rain, hailstorms, and earthquakes at will. And apparently they also made a mixture of Stygian water and sulphur, which killed animals and plants. Unlike other jack-of-all-trades, they were masters of all.

They are known to have been able to shape-shift into any form. In some texts it is said that their very appearance – and especially their eyes – were destructive. Their appearance varies from account-to-account, but most believe that after they started to use their powers for evil, they were transformed by Poseidon into dog-headed creatures with flippers and fins as appendages, forced to live in the depths of the seas where they couldn’t do much harm – or Tartarus, with the same effect. It is also said that this happened after they kidnapped Aphrodite. In other accounts Zeus killed them with thunderbolts, or Poseidon with his trident, or Apollo who turned into a wolf when they started to use their powers for evil – or these sea-dwelling creatures were killed by the great flood.

Though they are rarely mentioned in surviving ancient texts, their destructive powers always far outweigh their technical capabilities, and they are almost always portrayed as malevolent.

In Rick Riordan’s books, of course.

“After we made so many of the gods’ finest weapons. The trident of Poseidon, for one. And of course – we made the greatest weapon of the Titans! Nevertheless, Zeus cast us away and relied on those fumbling Cyclopes. That is why we are taking over the forges of the usurper Hephaestus. And soon we will control the undersea furnaces, our ancestral home!”

–The Telekhines’ plan, during the Second Titan War

Telekhines (also spelled as Telchines or Telkhines) are mysterious smiths and sea demons native to the islands of Keos and Rhodes. Their parents were either Pontos and Gaea, or Tartarus and Nemesis, or else they were born from the blood of castrated Ouranos along with the Furies.

Telekhines invented the art of metal-working and were said to have crafted the scythe that Kronos used to castrate his father Ouranos. They later made a Magical Trident for Poseidon which the god used to level mountains into the sea and form the islands. Their malignant use of dark magic, particularly, their production of a mixture of River Styx water and sulfur—which killed plants and animals—angered Zeus, who cast them beneath the sea or into the very depths of Tartarus. Telekhines were sometimes described as having the head of a dog and fish-flippers for hands. They’re also known as “fish children”.

Learn more about them in this universe here.

I found an anime TV series!

Cronus gets his hands on Theresa’s pendant. He convinces the magical TELKHINES to unlock its secret by giving them their enemy, POSEIDON.

Cronus Keystroke, Class of the Titans

Origin of the Fae: Telkhines
Telkhines are ocean-dwelling creatures with the heads of dogs and bodies similar to other ocean-dwelling creatures: some have the bodies of crustaceans, some of fish, some of seals. They always have human-like arms to perform their metalsmithing and other artistic works. Though they were able to shape-shift at some point, they were cursed by sea witches to remain in one form so all could recognise them. They have strong magic, but stuck in the ocean they are only a threat to other water fae, ocean-dwellers, and humans unfortunate enough to encounter them on a deep sea dive.

Where did you encounter telkhines for the first time? What do you think of these fae? Check out my Pinterest board dedicated to telkhines.