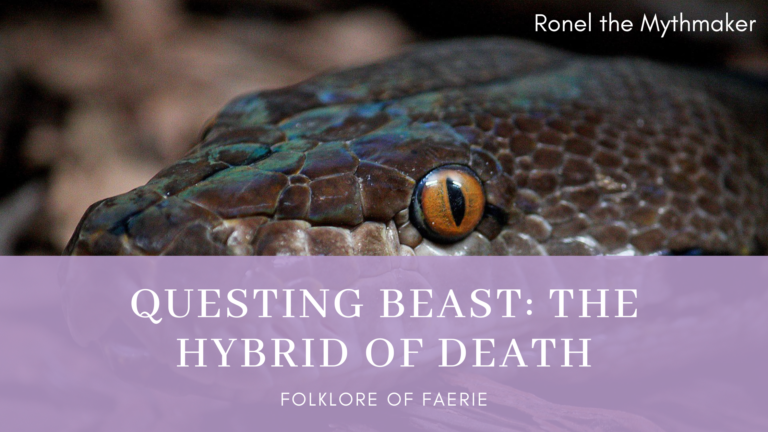 I first came across the Questing Beast in BBC’s Merlin when it bit Arthur. As it is an Arthurian figure, that is where we need to look to learn more: Arthurian myth.

King Arthur Tales of the Round Table Edited by Andrew Lang Illustrated by H. J. Ford [1902]

He raised his head to look, and, coming towards him, saw a beast so strange that its like was not to be found throughout his kingdom. It went straight to the well and drank, making as it did so the noise of many hounds baying, and when it had drunk its fill the beast went its way.

questing beast (Beast Glatisant) Arthurian figure. This monstrous but unexplained hybrid combined the bodies of serpent, deer, and leopard. Although it had only four legs, the sound of 30 hooves was heard whenever it ran. A knight pursued it endlessly, perhaps because it was really human, a boy transformed to animal shape by the horror of seeing his mother torn apart by wild dogs.

The Element Encyclopedia of Magical Creatures by John and Caitlín Matthews

In Arthurian legend, the Questing Beast, also known as Glatisant, is a hybrid creature with the head of a snake, the body of a leopard, the hindquarters of a lion and the feet of a hart (stag). From its stomach came the sound of 40 couples of hounds hunting. Its origin comes from a dark tale of incest in which a woman who sleeps with her brother, gives birth to this strange creature and is afterwards torn apart by dogs.

A hybrid creature of British Arthurian legend, said to have the torso of a leopard, the hindquarters of a lion, the head of a snake, and the feet of a stag. Other descriptions have included iron-like scales and prodigious amounts of slime. The rumblings of its stomach sound like the baying of 40 hunting hounds. The Beast perpetually seeks fresh water to quench its unbearable thirst, but whenever it drinks, the water is fouled by its poisonous saliva. Said to have been begotten by the Devil with a princess who accused her brother of rape after he rejected her advances, it is a symbol of incest and anarchy.

Questing Beast in My Writing

You can now support my time in producing folklore posts (researching, writing and everything else involved) by buying me a coffee. This can be a once-off thing, or you can buy me coffee again in the future at your discretion.

2 thoughts on “Questing Beast: The Hybrid of Death #folklore”