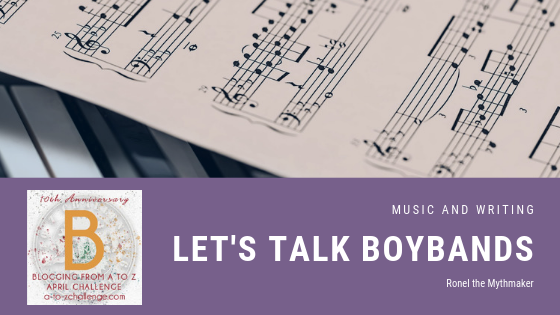 B is for Backstreet Boys, ‘NSYNC, Westlife, Daughtry, One Direction, Savage Garden and Boyzone

As I mentioned in my theme-reveal post, this month will be all about music and how it inspires my writing.

Backstreet Boys were the first boyband I listened to as a tween. (Tween: pre-teen, usually 10-12 years old.) Their music video of “Everybody (Backstreet’s Back)” made quite an impression. (See below.) Favourite album: “Black & Blue”. Favourite song: “I Want It That Way”. Check out the linked music video if you ever wondered why someone called a guy a “Backstreet Boy clone” like in “Princess Diaries”.

‘NSYNC were around the same time as Backstreet Boys. It meant that you had to choose a band and stick to them. (Ridiculous tween politics meant you could only love one boyband at a time.) I still have a favourite album, though: “No Strings Attached”. Favourite song: “Bye Bye Bye”.

Then at a party, I heard Boyzone for the first time. Wow. Magic. They were moving off the scene, so no riots. My favourite album: “…by request”. Favourite song: “No Matter What”. The rest is TMI. (Too Much Information)

Westlife came onto the scene with a bang. They were on the radio, TV and magazines. You couldn’t turn but to bump into them. So I bought their first album. And so did every tween girl I knew. We sang their songs during breaks, danced to it at parties, cried to them… You get the idea. Honestly, I cannot choose a favourite album. But their debut is really good, and you won’t go wrong with the two following it: “Coast to Coast” and “World of Our Own” (the rest were a bit meh). If I have to choose my favourite song right now: “World of Our Own”.

One Direction. If you haven’t heard of them, then I think you don’t have a twitter account and that you have been living under a rock the past decade. Just like all the boybands before them, they had mega success and then let it go to their heads. (I’m sure you can name at least one member from each of the before named bands who’ve gone out on their own only to realise that it was the band that was famous, not them. The exception being Justin Timberlake of ‘NSYNC fame, of course.) Anyhow, I don’t have a favourite album, only a collection of favourite songs. The obvious choice for favourite song is “One Thing”, the song that brought them to my attention.

Grown-up boyband Daughtry still falls into this category for me: their songs are sweet, full of emotion and as melodramatic as all the other bands mentioned in this post. Favourite album: “Break the Spell”. Favourite song: “Crawling Back to You”.

So how do they feature in my writing? Obviously, if I want to tap into my own jumbled teen emotions, I just listen to them and memories come flooding back. And as I said before: they are sweet, full of emotion and melodramatic. As an author, that’s inspiration gold.

Word of the day: boyband

According to Collin’s English dictionary: boyband n an all-male vocal group created to appeal to a young audience.

I just love this music video!

Do you like any of the above mentioned groups? Do you have a favourite music group/artist that starts with a “B”?

I saw as I googled for fan pages that some of the older bands got back together… Thoughts?

**Note: Your comment was successful even though it looks like it’s been swallowed by a gremlin. Technical stuff I still have to figure out means that I have to manually approve your comment. Know that it will happen every twelve hours and that I will answer your thoughtful response to my post. Thanks for stopping by!