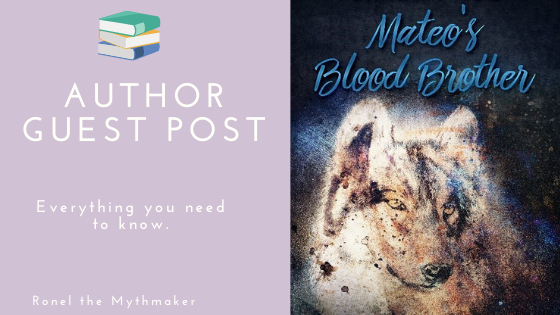 I have author friend Sandra Cox over today to talk about the worldbuilding of her newest novel.

First of all, thanks for hosting me, Ronel. Much appreciated.

Hi Folks. Ronel kindly offered to help me get the word out on my new release and asked me to post about its world building. Mateo’s Blood Brother is the sequel to Mateo’s Law which is where the world building and character development begin.

Both stories take place in Grizzly. And as far as world building, Grizzly pretty much built itself, I just had to jot it down on paper.

Grizzly is a little town in Montana, population 6792, located near the Blackfeet Indian Reservation. The town only has two stop lights and if you’re in a hurry they’re usually both red.

The jail is located dead center of Main. That’s where you can find the county sheriff, Mateo Grey. He doesn’t talk much, doesn’t have a lot to say.  That’s okay with the folks of Grizzly. The citizens like him because they know they can count on him to get the job done. They’d be shocked right down to the heels of their worn cowboy boots if they knew he was a shifter.

Blair Delaney is his chief deputy. Pretty as a picture. She looks like an angel and has the mouth of a trucker.  Sassy as they come. She moved from Atlanta several years ago and still hasn’t warmed up. She also hasn’t gotten used to the idea that nobody locks their doors and, for the most part, leave their keys in their trucks. Not to mention, everyone knows everyone else’s business.

Rose DeWitt is the sheriff’s patrol deputy. She’s slightly overweight, middle-aged and mothers everyone in the county. How she ended up in law enforcement is a puzzle but she thrives and everyone loves her.

His dispatcher Quinn Neely is the local crooner. He’s got a raspy voice from too many cigarettes and too much whiskey.  When he’s not at work he’s singing with the local band and often performs at Maddy’s Place, the local watering hole.

Adam Brasher is nineteen and does the paperwork. He attends night classes at the local community college and has aspirations of becoming an attorney.

Across the street from the jail is Belle’s Beans. Belle has the best coffee in town. Some say in the county. Jesse Kipp, the Chief of Police of the Blackfeet Indian Reservation, and Mateo’s blood brother, is partial to Belle’s bear claws. Jesse and Mateo had a falling out when they were young and their dealings with each other are on the contentious side.

Jeremy Haskins is the reporter, editor and owner of the local rag The Bear.  He and Blair went out once but it didn’t take.

Even thought it’s small, Grizzly is lucky enough to have its own clinic. It’s run by two no- nonsense nurses Pearl and Evangeline. Even Mateo thinks twice before crossing either of them.

It’s a friendly place to visit. But right now might not be the best time. Something’s been killing the livestock and attacking folks. People are even thinking about locking their doors. Word of advice, you might want to wait a month or so before you drop in.

Behind the amicable façade is a man who’s tough and determined. He’s Mateo’s Blood Brother.

They were friends, close as brothers. Then they weren’t.

Mateo and Jesse are cautiously working their way back to friendship when Jesse discovers the unthinkable. Delilah, the sultry shifter who’d had affairs with both men, is still alive. The tumble she took over a mountain ridge—a fall that nearly killed Mateo—should have finished her.

Now, there’s no choice but for the two men to work together to take down a she-devil straight from hell.  As the stakes escalate and the hunt becomes more intense, another wolf appears on the scene. Always where Jesse’s at. Always when he’s in trouble.  Jesse is divided between ending Delilah, a new love interest, discovering the identity of a certain brown wolf and staying alive.

Sandra, who also writes as S. Cox, is a vegetarian, animal lover and avid gardener. She lives with her husband, their dog and cats in sunny North Carolina.

An award-winning author, her stories consist of all things Western and more.

She spent a number of years in the Midwest chasing down good Southern BBQ. By the time she moved to North Carolina where Southern BBQ is practically a staple, she’d become a vegetarian.

Pineapple is a must have on pizza, along with black olives and onions.

She loves pumpkin waffles. Pumpkin cream cheese, not so much.

What do you think of the worldbuilding? Will you read this book? Have you read anything by this author? Any questions for the author?