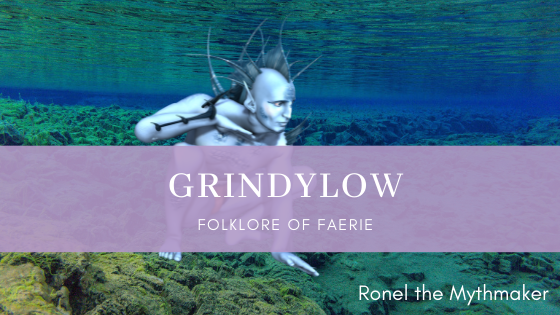 I first encountered this water fae in fiction. But folklore is much stranger… Though, to be fair, I couldn’t get my hands on really old sources and had to rely on new folklore books to research this British water faery. I did, however get some information on the Näkki from older sources.

An Esthonian legend relates that one time a girl was stopt by a pretty boy that had on him a handsome peasant’s belt and forced to scratch his head a little. She did so, and while she was so engaged she was, without her knowledge, fastened to him by his belt, but the rubbing of her hand set him to sleep. Meanwhile a woman passed by, who came up and asked the girl what she was doing there. She told her the whole matter, and as she was speaking she freed herself from the belt. The boy, however, slept sounder than ever and his mouth was wide open. The woman who had come nearer cried at once, Ha! that’s a Näkki (Neck,) see his fish’s teeth! The Neck instantly vanished.

Haunting pools and bogs, this malicious water spirit of the northern counties of England lures children to their death by drowning.

In the folklore of Yorkshire, England Grindylow was a nymph or water-fairy who lived at the bottom of pits, ponds, and wells; when children came too close to her domain, she reached out, grabbed, and held them under the water until they were drowned.

In Finnish mythology the näkki is a water fairy living in murky pools, wells and under docks, piers and under bridges that cross rivers. Descriptions of the fairy vary; it has been described as being very beautiful in the front but extremely hairy and ugly in the back but also as an ugly fisherman that can shape-shift at will into a beautiful woman, a horse, a hound, or a silvery fish.

Living in the swamps of the Phillipines, the berberoka are a species of cannibalistic water fairy; they are renowned for their predation on the Apayao people who live along the Apayao River. The fairies would move to a small pond or section of swamp and drink up so much water fish could easily be seen swimming near the surface. Fishermen are then lured to the area by the prospect of a fast and plentiful catch; then, berberoka release the water, drowning or knocking out their prey. Once the trap is sprung, they drag their food down to the watery depths where it is consumed.

Grindylow or Grundylow is a swamp monster from English folklore. They are described as small humanoid beings with scaly, green skin, sharp claws and teeth, and long, thin arms ending with long, thin fingers. With surprising strength, they pull unwary children into the swamps, ponds and marshes they inhabit, far beneath the water and safety. Apparently, they gobble them up when no-one’s looking. They have been shadowy figures, akin to nursery boogeymen, to frighten children away from dangerous places where they can drown. A similar figure is Jenny Greenteeth from English folklore, Näkki from Finnish mythology and Berberoka from Philippine folklore.

Of course, there are the grindylows from Harry Potter.

A sickly green creature with sharp little horns had its face pressed against the glass, pulling faces and flexing its long, spindly fingers.

Learn more about Grindylows in the Harry Potter universe here.

Though I haven’t read this book, it is widely recommended and is said to have grindylows.

A hostile race called grindylows appears in The Scar, a novel by China Miéville. They are described as humanoid with grey-green mottled skin, large dark eyes, foot-long teeth and a single eel-like tail below the waist

At least this is what Wikipedia and several podcasts say.

There are probably others, but these sound interesting enough.

Grindylow in My Writing

Origin of the Fae: Grindylow

The grindylow is a flesh-eating faery – they eat fish, but prefer human flesh, especially children. Though there are rumours that they can change their form to more easily lure their prey, it is actually a glamour cast through the water to lure children in closer for them to seize them and pull them below the surface. They live in swamps, ponds and marshes, preferring to take cover beneath algae and other water plants to keep an eye on the land and potential prey. They are very humanoid in their physiology, but with light green or blue skin (depending on the natural colour of water where they live), webbed hands and feet, and some even have a fin on their heads to make swimming easier. Their limbs are also longer and thinner than a human’s, thus the folklore surrounding them. They also have sharp teeth like a fish.

Where did you hear about grindylows for the first time? What do you think of these fae? Check out my Pinterest board dedicated to grindylows.

You can now support my time in producing folklore posts (researching, writing and everything else involved) by buying me a coffee. This can be a once-off thing, or you can buy me coffee again in the future at your discretion.