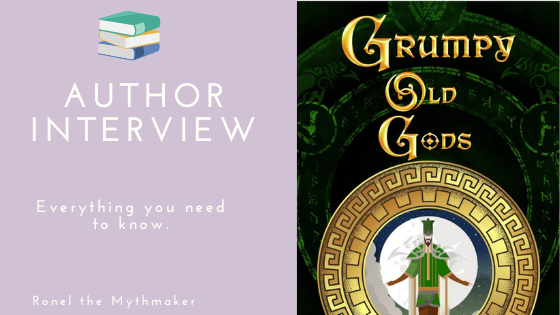 Today we have Juneta Key, author of Subterfuge, Sleep Deprived.

What is your story in the Grumpy Old Trickster Gods about?

The name of my story is Subterfuge: Sleep Deprived.
It is part of a serialized fiction I am doing for Grumpy Anthologies.  This story is a mythological mystery starting in the Underworld.  The god of dreams, Morpheus has gone missing.  Every realm is getting really cranky.  The Purgatory: Supernatural Police Force, run by the Four Horsemen of the Apocalypse are asked to send someone to investigate.  Death sends a Nephilim lieutenant detective and a rookie detective, the ex goddess of the dawn who recently joined the supernatural police force.

Ooh, sounds fun! What kind of research did you do for this story?

I tend to research as I write, but I looked up and read some of the old myths around Morpheus, the Oneiori, general myth persons included in the story, and the Sandman for inspiration.  Also to refresh my memory.  I was also a 911 Dispatcher in my previous life working directly with police, fire, and ambulance.  I got to tell them all where to go, and help those in crisis.  I was the first responder you get before anyone arrives on scene.  So I guess you could call that research–life research.

Do you enjoy books filled with mythology and folklore?

Yes.  I don’t know if I can explain.  I think it is the deeper psychological connections and the shadow  of self so deeply reflected in mythology.  I love exploring and discovering what I see underneath the story so to speak.

Besides the fact I just think mythology is cool and fun.  I was big into Hercules with Kevin Sorbo and Xena and such.  I became hooked on mythology while I was in junior high school and it just sort of stuck.

Of course I like the humorous, quirky side of mythology when reading–obviously, which is why Vanessa Well and I established Stormdance Publication and started producing our brand series, Grumpy Old Gods.

Trickster is our fifth volume in that series.  We have number six, Grumpy Old Gods, planned for July 2022 release, Grumpy Old Fash Fiction for October 2022, and Grumpy Old Fairytale’s for November 2022 this year.  Also a call out for Grumpy Old Dragons to come out in 2023. If interested you can check the website Stormdancebooks.junetakey.com for the current call for submissions.

I still remember Kevin Sorbo as Hercules! Where did the inspiration for this story come from?

I started writing about The Four Horsemen of the Apocalypse in Grumpy Old Gods Vol. 1.

That idea sprang from a series of flash fiction I originally planned to write as short reads, or novelettes, or possibly novel series, called Apocalypse, Signed, Seal, and Delivered–still on the planning and plotting project table in production. (A different take on it of course from the Grumpy serialized version.)

The humorous thing in my writing just happened when I wrote that first Grumpy story, Playing Hookie in Vol. 1.  Then I wrote about 911 Dispatch in Purgatory cause-in my real life I was a 911 dispatcher–and I have just kept writing humorous mythic connections in various ways.

The Harpy incident referred to in this story can be found on my Medium profile called Grumpy Old Harpies with a few other mythology flash fictions.  .

Are there any books or authors that inspired you to become a writer?

Mythology based, Space Opera, Fantasy, and paranormal romance are my favorites.  A new troupe favorite is Midlife Crisis Paranormal Women’s Fiction. I may have to try to write this myself sometime in the future.

I’ve recently found paranormal women’s fiction, too! I’ve featured a lot of reviews of these books in April. Name an underappreciated novel that you love.

Can’t think of an unappreciated novel off the top of my head, but an unappreciated movie–The Postman by Kevin Costner.  (This is a book.  I recently bought it to see if it is better than the movie as most books are better.)

My favorite quote is from that movie: “You hand out hope like it is candy in your pocket.”  I love all the universal themes within, and yes, I am a Costner fan. I love the theme of hope that saturates the storyline from beginning to end.

Well, I don’t know if it is unappreciated, but she is fairly new on the fantasy scene as a writer. I love Wielder’s Storm series by Elle Cardy. It is a fantastic and creative fantasy adventure on the high seas.

I’ve had that series by Elle Cardy on my TBR for a while — will be reading it in June! Which author in your genre do you most admire, and why?

Well, I already answered this question above by who inspires me.  It is the same mostly.  I write fantasy adventure and space opera.  I plan to write paranormal romance at some point as well as paranormal mystery, and whatever else takes my fancy.  My focus in the next couple of years is fantasy and space opera.  And of course, I plan to keep writing and producing Grumpy Old Anthologies.

Have pets ever gotten in the way of your writing?

Well currently for the first time in my life since I was a one year old I have no pets of my own.  Yes, I miss that so much. My last pets were two cats which my ex-roommate took with her when she moved back home.  Before that my babies were a fox terrier/chihuahua mix, of 18 years and her sister the same age, a calico cat, named Kit Kat I called Quit Cat.  They both passed in 2008 within one month of each other.  It was hard. I wrote an Ode to Quit Cat. I miss her so much.

However, my current roomies have two dogs, a min pin/chihuahua mix, Callie, and a German Shepard named Hercules. Yes, I live with a dog named after a Greek demi-god.

I work from home from my laptop. Both dogs love being outside, so they can really pester me a lot, until I take them out, which might play out to three or more times a work day, if I am able to break away that much. They take up my personal break time to do this. I feel like I am working for several hours straight without any break on days this happens, lol, but they are sweethearts.

Luckily, it is not every single day or I would have a problem. Generally, twice a day during my work hours, until their owners get off work and come home.

*whispers a secret* I miss cats.

I’m lucky that I can keep the door open for my dogs to come-and-go during the day. If you were to write a spin-off about a side character, which would you pick?

Well part B of this serialized mystery involving Morpheus for the Grumpy anthologies will continue with Lydia and Eos in Grumpy Old God Vol. 6 releasing in July 2022.   As for other characters in my story, maybe, the ex-goddess of the dawn-Eos, Sandman, Hades, or more of the Oneiori such as Nyx.

A spin-off with Nyx sounds intriguing. What do you need in your writing space to help you stay focused?

Star Wars baby! Currently baby Grogu from the Mandolorian on Disney.  I also have Chewbacca, Boba Fett, R2D2, BB8, Jar Jar Binks, X-wings, Milliumenin Falcon and so forth, plus a framed 1977 marque poster of The Empire Strikes Back… and, no that is not all of my Star Wars collection.  I have been collecting since 1977. The baby yoda’s sit on my computer right in front of me while I write.

Juneta is a native Texan living in Central Florida. She is hanging out with pirates, playing with dolphins and entertaining Grumpy Old Gods by story spinning, tale weaving, fate making, world-creating, mythology bending, star mapping, journey planning, fortune-telling with the power of words.

Her current novels-in-progress are in the editing stages, soon to be released around the end of 2022 or first of 2023, Atlantis Rising and Trident’s Heir.  You can find her serialized fiction in the Grumpy Old Gods anthologies. Juneta was a 911 Emergency Dispatcher for Police/Fire/EMT for 23 years in another life. She currently works full time for Ninja Writers LLC writing community.  Juneta’s website & social links HERE!