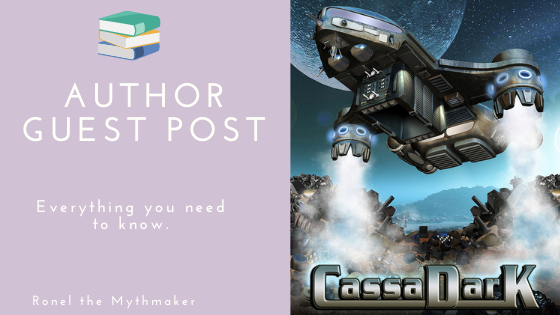 I have Alex J Cavanaugh over today to talk about his newest release “CassaDark” and the society found in it.

Science fiction stories set outside of our world tend to showcase a variety of races. (Think any of the Star Wars films.) Different cultures, physiques, languages, beliefs—a lot of world building goes into bringing those races to life. Probably not to the level of JRR Tolkien’s Middle Earth, but a lot of thought does go into creating the worlds, civilizations, and cultures than inhabit space.

Before I dive into the races represented in the Cassa series, let me give you a rundown of some of the things one needs to consider when designing an alien or fantasy race:

What do they look like? What shape, size, features, etc.? How will this affect their movement or how they use tools?

Communication – how do they speak with one another? What is their language?

What is their social organization? What does a family unit look like?

What are their religious beliefs or customs? What morals are standard and acceptable? Traditions and rules?

What is their ideal environment? Where else can they live? What structures do they use for shelter, buildings, cities?

What is their political structure? Military structure? Where do they rank among other races?

What is their economic structure? What constitutes payment? Is there education involved to train for working positions?

What technology do they possess?

What is part of their everyday lives? Food, entertainment, hobbies, etc.?

What special abilities do they possess?

There are hundreds of other things to consider. Think of how diverse people are, how many different things make up individual cultures around the world. You could spend months, even years fully fleshing out a new race. Fortunately, that much detail isn’t often required.

For my Cassa books, there are eleven humanoid races:

These races are all aware of each other and interact (sometimes not in a positive way). They all possess a sector of space that is their territory. Most have multiple special abilities. But outside of physical and military descriptions, there were only a couple races I expanded upon.

As the race of the main character in the first three books, Byron, I fleshed Cassans out the most. Their home worlds are sister planets hosting a variety of climates, and their territory sits at the edge of unknown space. Cassans are pale to light brown in skin color, hair black to light brown, average build, and live an average of a hundred and twenty years. They possess a very strong military but are far from the most aggressive of the races. Their special abilities include telepathy, the ability to bond with a mate for life, and (assisted) teleportation (males only).

Introduced in the second book (along with the other main character, Athee), Tgrens reside on a ‘desert’ planet. While a large portion is desert, Tgren does boast several oceans and greener climates. The only ones who haven’t ventured into space, Tgren technology trails behind the other races. Most Tgrens are olive to light brown in color with dark hair and average build. Their abilities are just beginning to emerge, which includes telepathy, bonding, teleportation (all), and mind healing. The contrast between them and the other races was fun to create and capitalize on as I wrote the books.

Originally known as Rogues and not recognized as an individual race, Kintals are a blend of two or more races; the most pure are a blend of all ten races. They call no planet home but exist in every area of the galaxy, living where they can. They are the one race the others looked down upon, and that introduced an element of prejudice into the last two books. Kintals feature prominently in CassaDark, which follows Bassan, also a Kintal. (Son of Byron, a Cassan, and Athee, a Tgren.) Kintals possess the widest range of special abilities depending on what race(s) are dominant in their genes.

The series also touches upon several of the other races. You get a glimpse into the controlled lives of Charrens in CassaDark. Their caste system means people are born into positions they will occupy their entire lives. The Vindicarn, a warring race with wrinkled black skin, feature in the first and third books. They also live on a desert planet and while telepathy isn’t their strong suit, the ability to shield minds makes up for that lack. Arellens are very unique in appearance—thin, tall, and with a blue haze to their skin. Living on a lush, wet planet, they are the most balanced and peaceful of the races, although they do possess the most powerful weapon of all. Narcons are yellowish in color and often side with the Vindecarn. Torbethians value art and artefacts.

So, if you decide you want to create your own race(s), remember—it is a lot of work, but it’s a heck of a lot of fun! And I hope readers enjoy the various races in my series and in CassaDark (and it stands on its own as a story, so the other three books are not required reading to follow along), which releases on April 5.

Alex J. Cavanaugh works in web design and graphics, and he plays guitar in a Christian band. A fan of all things science fiction, his interests range from books and movies to music and games. Online he is known as Ninja Captain Alex and he’s the founder of the Insecure Writer’s Support Group.

His world is unraveling…

Bassan’s father is stepping down from command. His best friend almost dies when Bassan freezes. Now, he’s being sent across the galaxy to speak at an important conference. Despite saving the eleven races years ago, he’s paralyzed by fear and doubt. Could things get any worse?

Once there, new acquaintance Zendar convinces Bassan to visit his planet for a humanitarian mission. Bassan’s special connection to ancient technology is the key to saving Zendar’s people. One problem though—it’s a prisoner planet.

On Ugar, he discovers things aren’t so straightforward. As each secret reveals itself, the situation grows more desperate. If he can’t find the right answers, he might die along with Zendar’s people. Can Bassan summon the courage to be a hero again?

Have you read these books? Do you read science fiction? Do you have any questions for Alex?