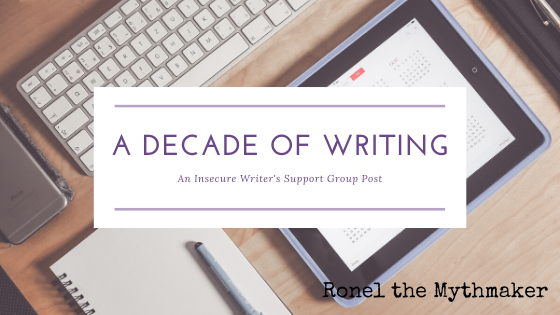 It’s a new month and time for another posting of the Insecure Writer’s Support Group.

July Question: There have been many industry changes in the last decade, so what are some changes you would like to see happen in the next decade?

You know that Quick-Quotes Quill Rita Skeeter has in the Harry Potter books? I would love something like that – it’s like thinking and writing all at the same time without the carpal tunnel.

When I started out in this industry a decade ago, one had to jump through so many hoops if one wanted a traditional publisher (as a South African, I would have to submit my manuscript to UK or US agents in the hope that they’ll look past the fact that we’re not even in the same hemisphere and that they’ll love my book enough to represent it to a traditional publisher). And let’s not get into the hoops you had to jump through to publish on Amazon (these hoops had mostly disappeared and turned into a single form you have to fill out).

Ten years ago, the traditional publishing houses consisted of the Big Six. They shrunk to the Big Five by the time I started publishing my own books. If rumour is to believed, it is now just the Big Four…

Self-publishing (going indie) became a respectable, profitable choice for authors and along with advances in technology, changed the industry forever.

But we can still do with some changes.

There have been strides to make the publishing scene open to all countries, yet I still find as a South African that I have to jump through several hoops just to get on the same playing field as my international cohorts. And sometimes that isn’t even possible… It would be awesome that if in the next decade, equality would be the watch word in indie publishing. (I’m not even getting into other types of equality here, just the right for all citizens of the world to publish on all publishing platforms. If I can buy on your platform, then I should be able to publish on it as well.)

Tip: if you are having issues with publishing your ebooks directly on certain sites, try Draft2Digital. They have the power to publish your work on many sites that refuse to deal with your country of origin.

Though being indie has come a long way to become respectable, I still find ignorance in many local writing groups (and international book blogging communities) regarding the choice to be an indie author. There is this misconception that all indie authors failed to get their work traditionally published and thus their writing is inferior. As an industry, we need to work harder to get the message mainstream that it isn’t true: the publishing path (traditional, indie or hybrid) you choose is a personal decision based on your personality type, your vision for your career, and how much control you want over your books.

Personally, I would love to see the rise of indie bookstores. Not just independently owned, but also shelving indie books – at competitive prices that doesn’t leave the author in the red.

Talking about being Indie: there is this new book club especially for Indie books. You can add your book here and check out the books on a list on Goodreads here.

And though I would love an AI to help me with my writing (especially nonfiction and copywriting that takes up a lot of time), I’ve watched Terminator one time too many and will rather opt for the magical quill.

28 thoughts on “A Decade of Writing #IWSG”