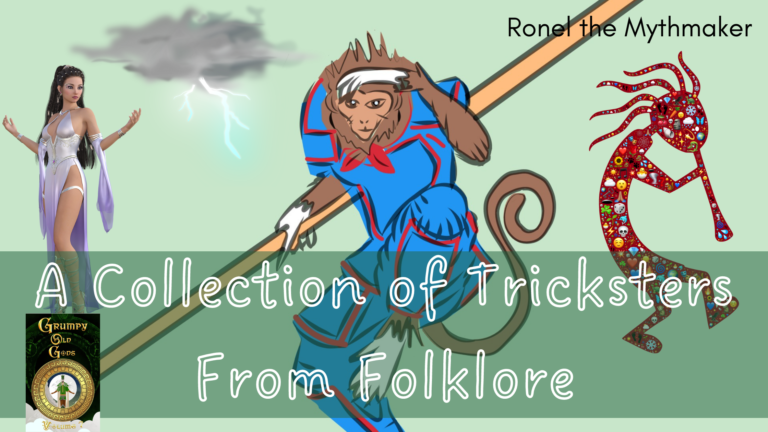 In celebration of the release of the Grumpy Old Trickster Gods anthology, I’m doing a short folklore post about tricksters in folklore.

Usually in folklore and mythology, a trickster is a character in a tale who is smart, has secret knowledge they use to play tricks, or who just disobeys normal rules and defy convention. This archetype is about breaking physical and societal rules – taking the boring out of normal life – and establishing a new normal.

Much like the court jester, the trickster openly questions, disrupts and mocks authority.

The trickster can be cunning or foolish or a combination of the two. Breaking rules usually involves various tricks and even thievery. Frequently, the trickster also has the ability to shape-shift, underlining the rule-breaking element of their archetype.

In Greek mythology, Hermes is the trickster, the god of mischief. In Norse mythology, it’s Loki in all his shape-shifting glory. In African folklore, it’s usually a rabbit or hare who is the trickster. And, of course, there’s Anansi the trickster spider who came from West Africa and travelled through the African diaspora just like Brer Rabbit.

Native American mythology tricksters don’t act like the tricksters just mentioned: they don’t assume just one role. They can be the hero in one tale and the villain in the next; they can be wise one moment and foolish in another; they can be a teacher or a thief: they are open to life’s paradoxes. Coyote, Raven and Crane are usually seen as tricksters.

There are tricksters from around the world: the Aztecs have Huehuecoytl, the Celts have Puck and Leprechauns, the Chinese have Sun Wukong, the Greeks have Eris, the Japanese have Kitsunes, the Polynesians have Maui, the Russians have Ivan the Fool, the Spanish have The Trickster of Seville, and in Wales they have Morgan le Fay.

A lot of these tricksters have gone from folklore and mythology to literature and popular culture, changing with the times. Bugs Bunny is perhaps the most prominent of tricksters from modern culture (if you overlook the popularity surge of Loki thanks to the Avengers movies).

Let’s take a quick look at eight of these trickster gods and goddesses. After all, they usually have a purpose behind their trouble-making plans.

Anansi the Spider appears in various West African folktales. He has the ability to shift between spider and man. A typical story involves him getting into some kind of mischief – and facing death of some sort, usually being eaten alive – and then talking himself out of it. These oral tales have evolved as it moved from West Africa through the slave trade to the Caribbean and southern Northern America to include lessons on how to outsmart those who threaten to harm or oppress.

Eris is the goddess of chaos and usually present in moments of discord and strife. She enjoys to make trouble for her own amusement, like the Trojan War.

Kokopelli is a trickster god and a fertility deity. He is known for his curved back and the magic flute he carries with him. In a popular legend, he danced through the land playing his flute, turning winter into spring. The people from a village were so excited, that they danced all day and night. And soon after, they found that every woman in the village was pregnant…

The goddess of thieves, cheats, liars and fraudsters. She’s often referred to only having a body and no head, or a head and no body. This came from tricks she played on humans, swearing by one of these and then making it disappear when the humans complained. The Roman gods thought she was hilarious, made her make it right by the humans, and then be the patron goddess of dishonest and disreputable people – who regularly made offerings to her to help them to hide their crimes of deception.

Lugh is a smith, craftsman and warrior – but in many Irish tales, he also takes the role of trickster. Usually he hides his true nature to make others believe him weak. It is even theorised that he is the inspiration for leprechauns.

In a constant battle with the thunder god, Perun, and thus associated with storms; an underworld deity who annually send out souls to the land of the living as his messengers; and a trickster god much like Loki and Hermes.

Responsible for the great flood that wiped out the world and then using magic to rebuild it, Wisakedjak is a known deceiver and shapeshifter. He uses his pranks to aid mankind instead of harm them, though. Stories about him usually follows a clear format where he tricks someone to do him a favour, with a moral at the end.

Sun Wukong, or rather the Monkey King, wasn’t born a god, but through trickery became immortal. He was born with magical powers, powerful strength and intelligence. He had many adventures, including erasing his name from “The Book of Life and Death”, eating the sacred “pills of immortality”, tricking the Dragon King into giving him a powerful staff, and fighting the Jade Emperor.

Who is the most powerful trickster god?

If you put all of these cunning beings in a room, who would win a fight of mischief?

In Blaze of Glory, Bast, Apollo and Kit (a Kitsune) are tasked with a competition of mischief, the loser having to live with Loki in his cave.

But who will win in this group of ten?

Obviously, the Monkey King: by the time his adventures in folklore were done, he had made himself immortal five times over with his trickery – not bad for someone who wasn’t a god to begin with.

Who is your favourite trickster? Any tales of tricksters you’d like to share? Have you read this anthology?